Up to the Golden Rock

Myanmar again! I visited Myanmar for the first time in 2011 and I loved both the country and its people. However, I did not have enough time to visit all the country and some sights were not seen in the best conditions (I was there during the rainy season), that’s why I wanted to come back to Myanmar during my world tour and complete the visit.

At the same time, I was a little bit worried to find a country (too much) changed: I had fond memories of Myanmar like it was three years ago, a closed country not spoiled by tourism and true kind people that did not look for our money. Now that the government seems to be opened to dialogue and political reforms, international sanctions are being retired and foreign investors and herds of tourists are arriving rapidly so how can the country absorb that? Will I find the same Myanmar or wouldn’t be better to keep my good memories of the wonderful country that it was once?

Like in 2011 I landed in Yangon, the former capital city. There I met Freddy, a friend from Paris, who will be traveling with me for the next ten days. Yangon is a good introduction to Myanmar but at the same time it is very different from the rest of the country, Indian and Chinese communities are very present in Yangon: during the British rule Indian immigrants flooded into Yangon acting like second colonizers and Chinese immigration was encouraged as well, marginalising the Burmese people. Still today this blend of different populations and cultures is very present in the city centre.

The first day was spent visiting downtown Yangon. We did the Lonely’s colonial walking tour and I was happy to see that since my visit some historical buildings have been restored or are currently under restoration while other places like my favorite tea house haven’t changed at all. 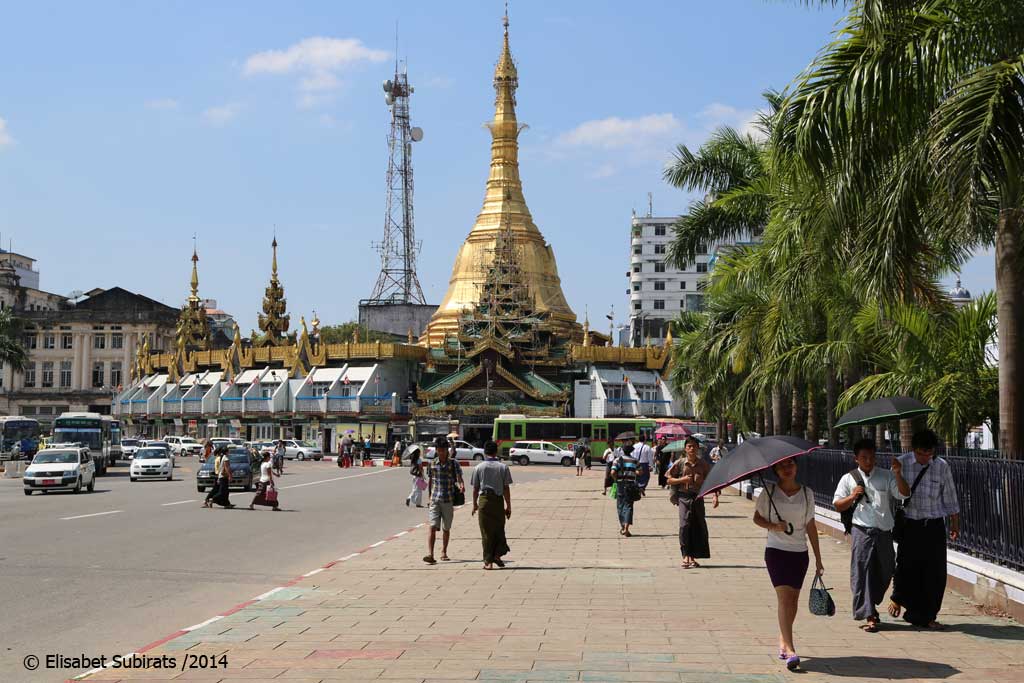 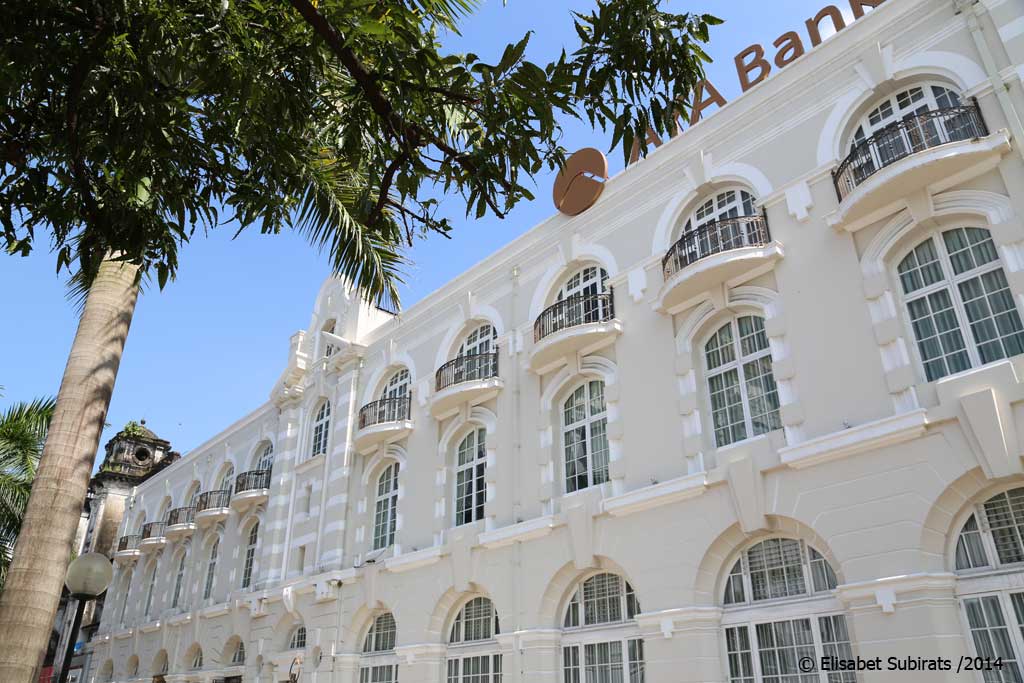 That afternoon it rained very hard, we were stuck under a portico for a while (too much water for Freddy) and missed the Shwegadon Pagoda. Instead, we went to drink a “sunset cocktail” on the city’s roof, the 20th floor of Sakura Tower and still the best view over Yangon. 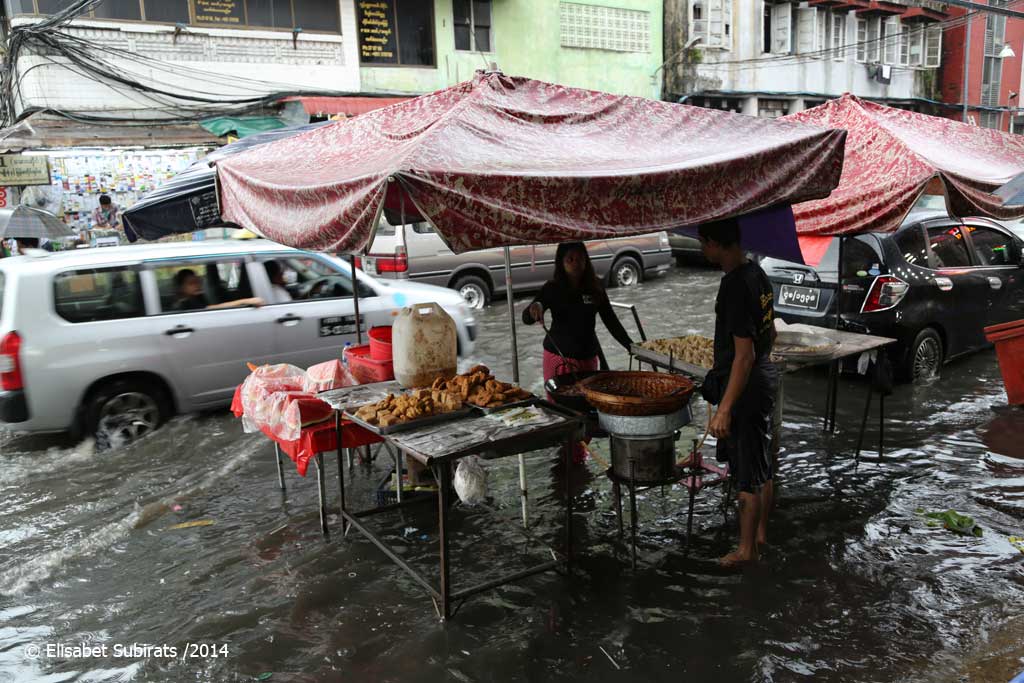 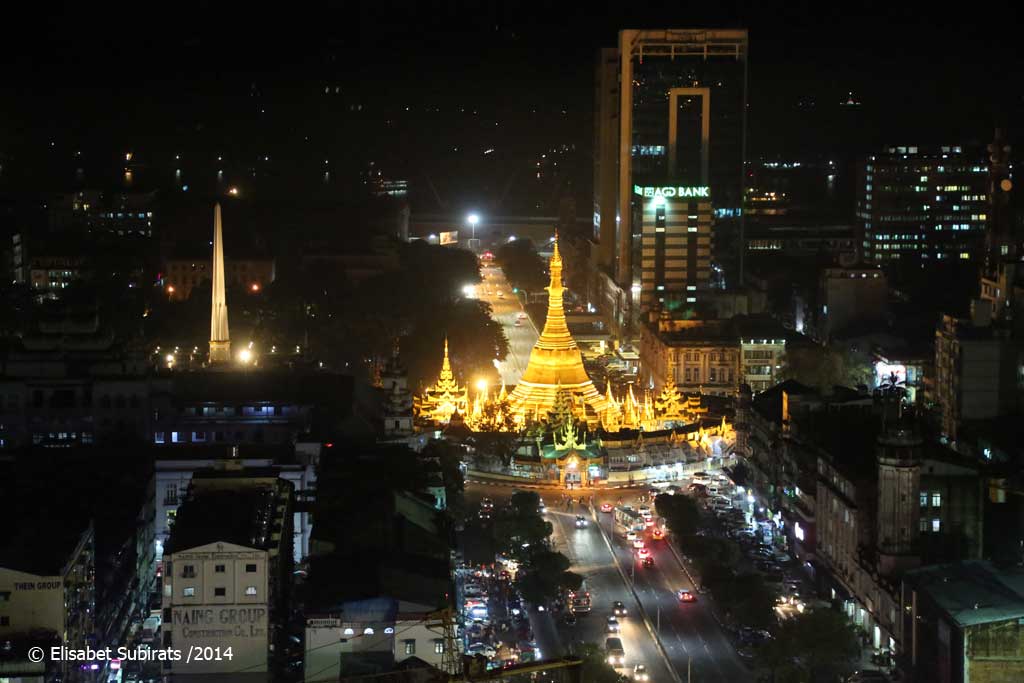 The visit of the city was completed the following day with a quick visit to Kandawgyi Lake and Bogyioke Aung San Market. The park is a cool place to spend the hottest hours of the day and the royal barge on the lake, for good or bad, is something not to be missed lol. 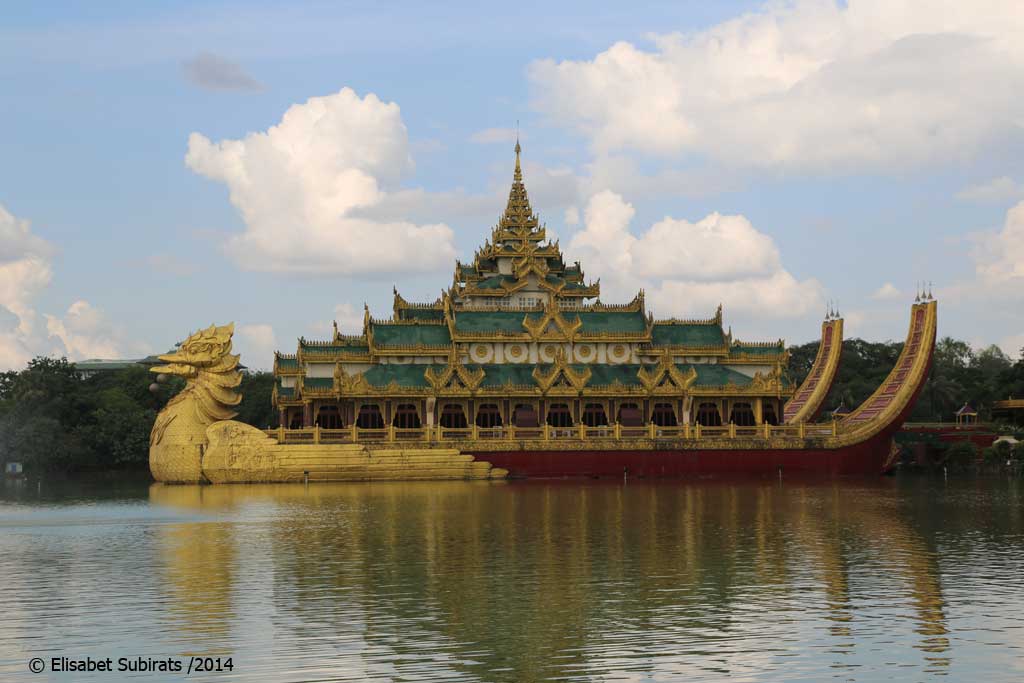 I was surprised to see that most of the cars on the road are new (90% are Toyotas, they took the biggest part of the cake!) while three years ago cars in Yangon were very old. For security reasons, motorbikes are still forbidden in this city.

In the afternoon we headed to Shwegadon Pagoda, one of the Buddhism most sacred sites and the must of any trip to Yangon. What a disappointment to see that the main stupa is under restoration and it is completely covered by scaffolding! Still, this is a great place for people watching and during my visit I could see the beginning of a monks’ ordination ceremony, so nice! That day there was also a short storm and the golden stupa, despite the scaffolding, looked especially beautiful under that sky. 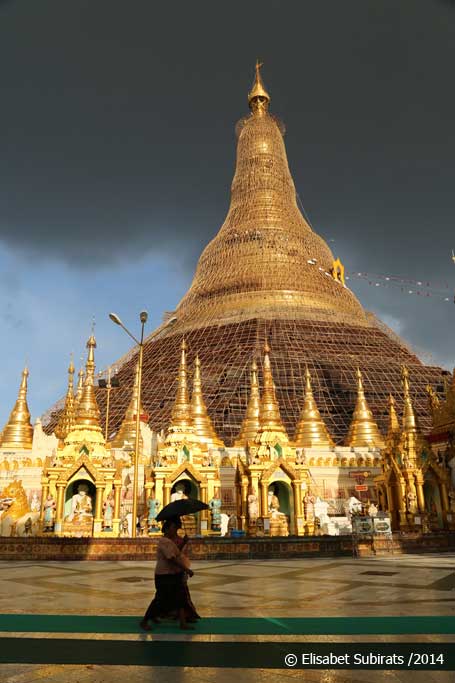 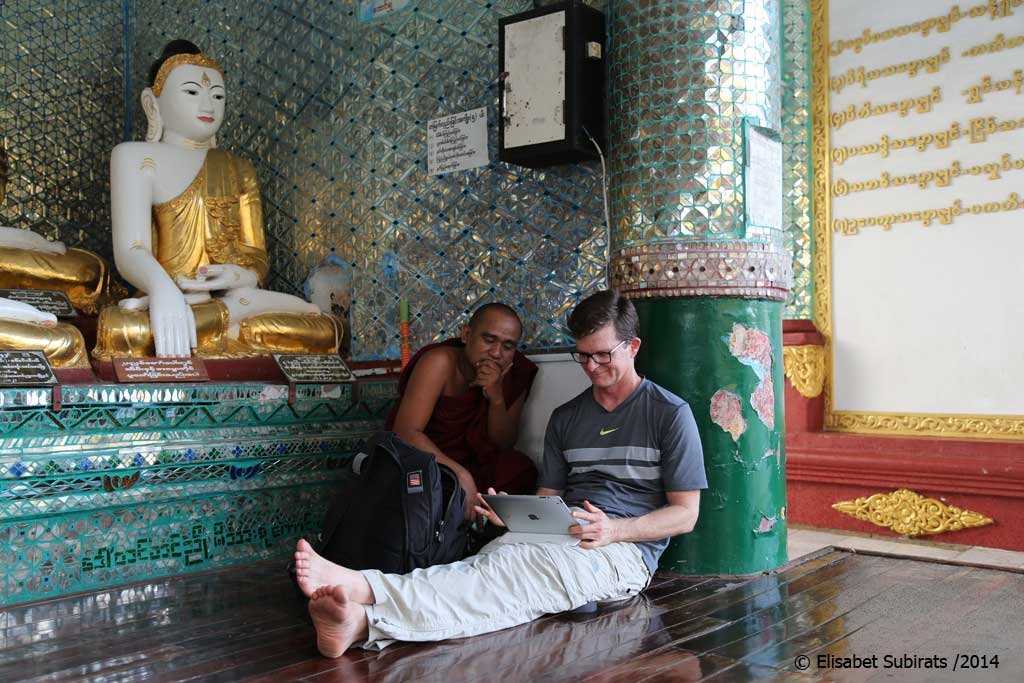 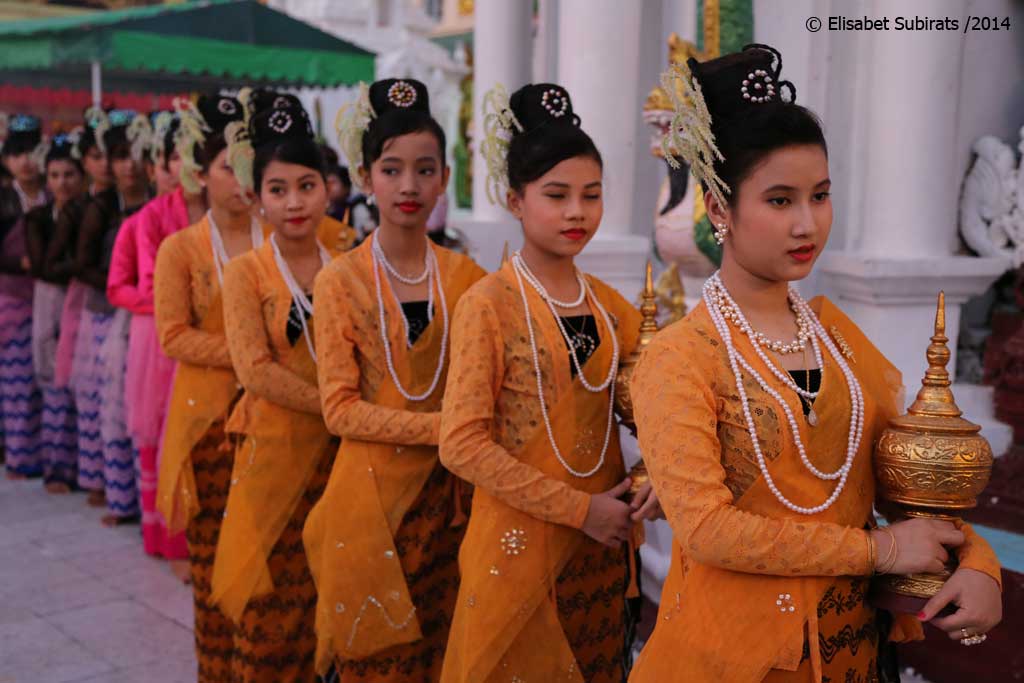 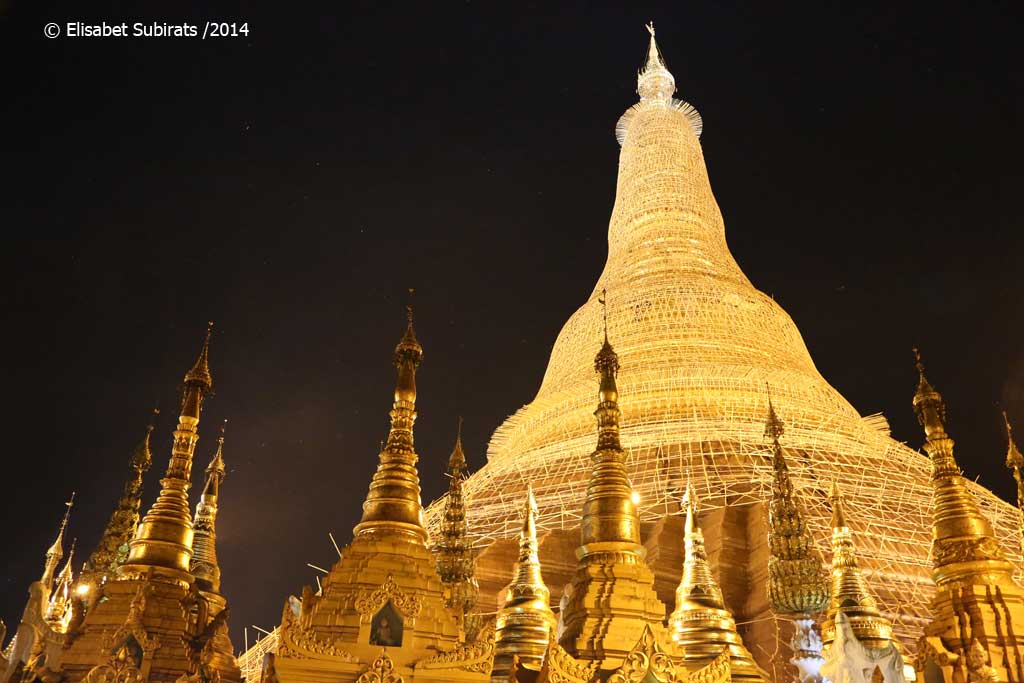 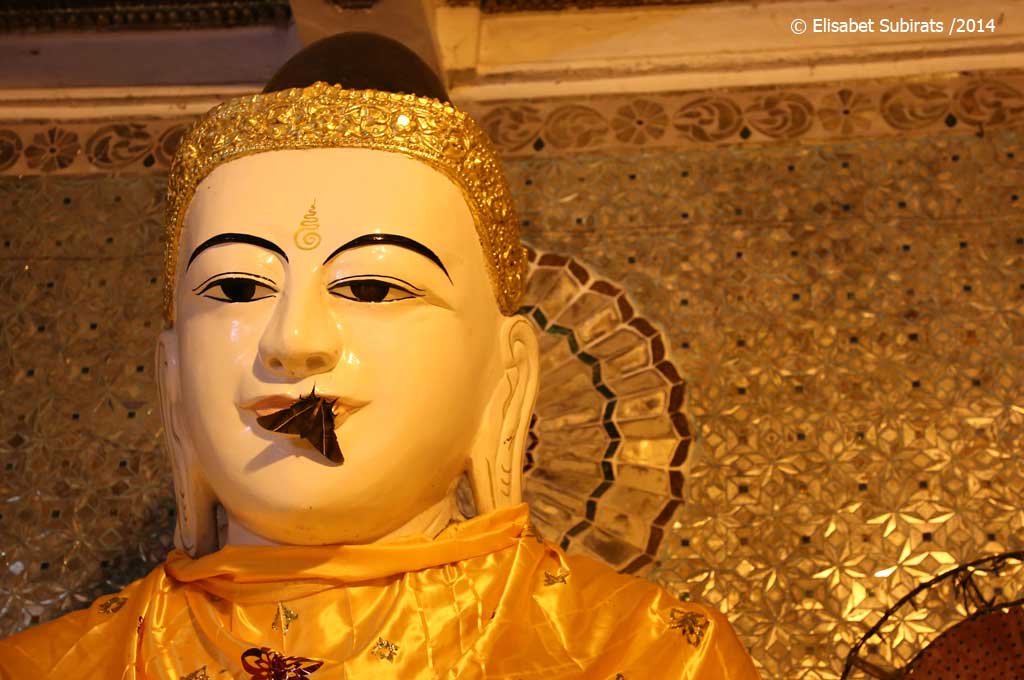 Most of the nights we had dinner in China Town. In the 19th street there is an interesting Night Food Market, with many bbq stalls and some small restaurants. 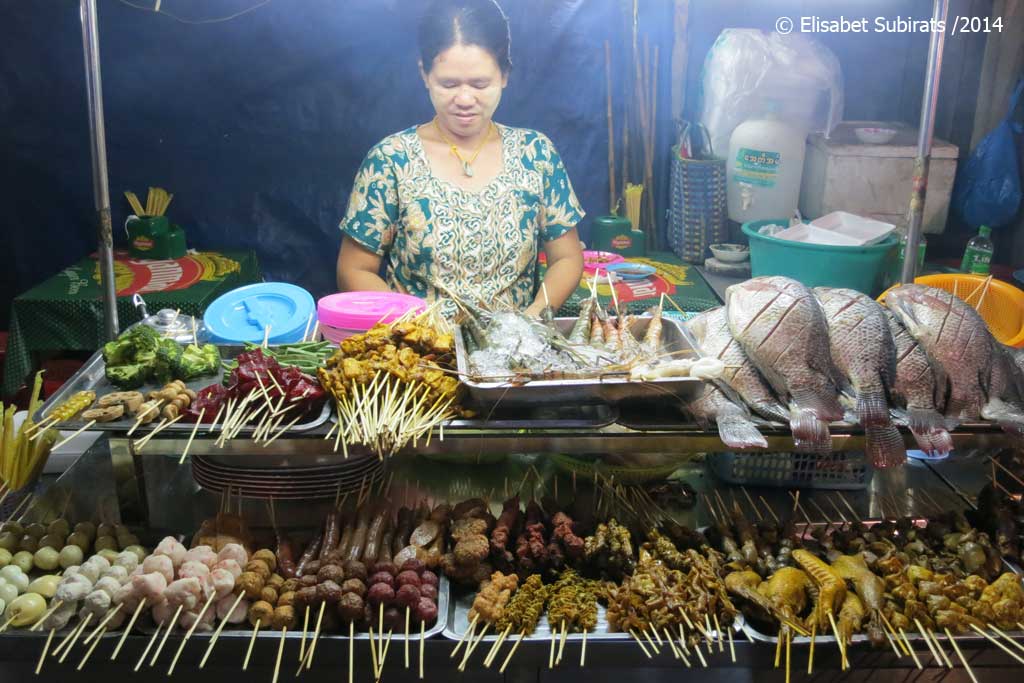 We were surprised to see all those tons of grilled crickets for sale, very popular amongst locals, where do they go to catch them? 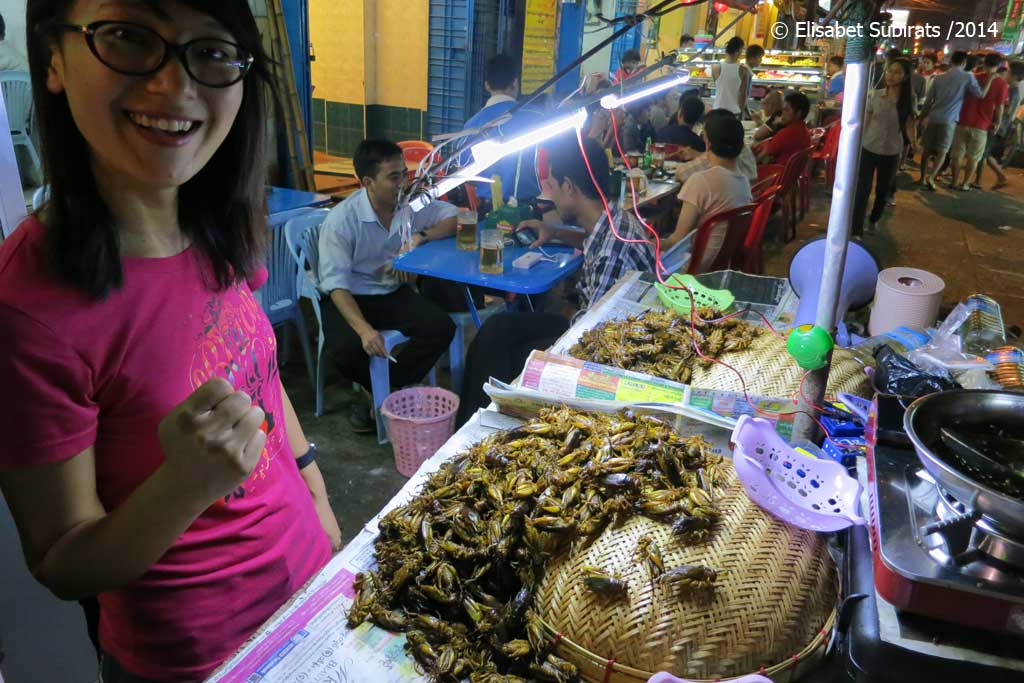 I preferred the fruit stalls, so colorful and full of exotic fruits . . . Since my visit to Singapore I was curious about durians (forbidden in public places in Singapore due to its bad smell) and finally I got the courage to taste one in Yangon . . . never more, ahahah. 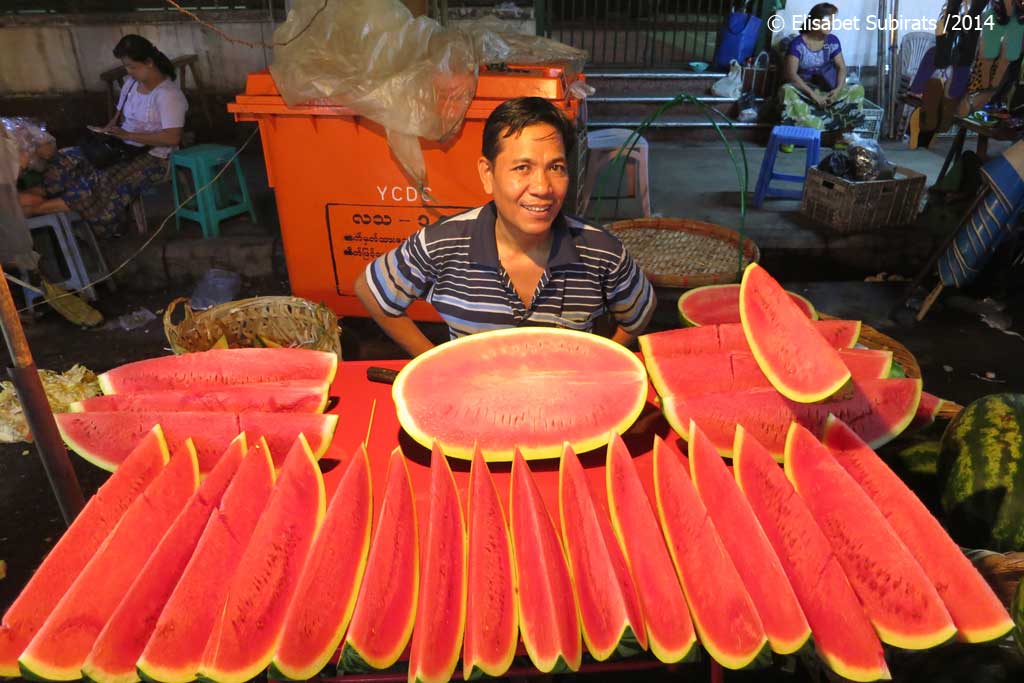 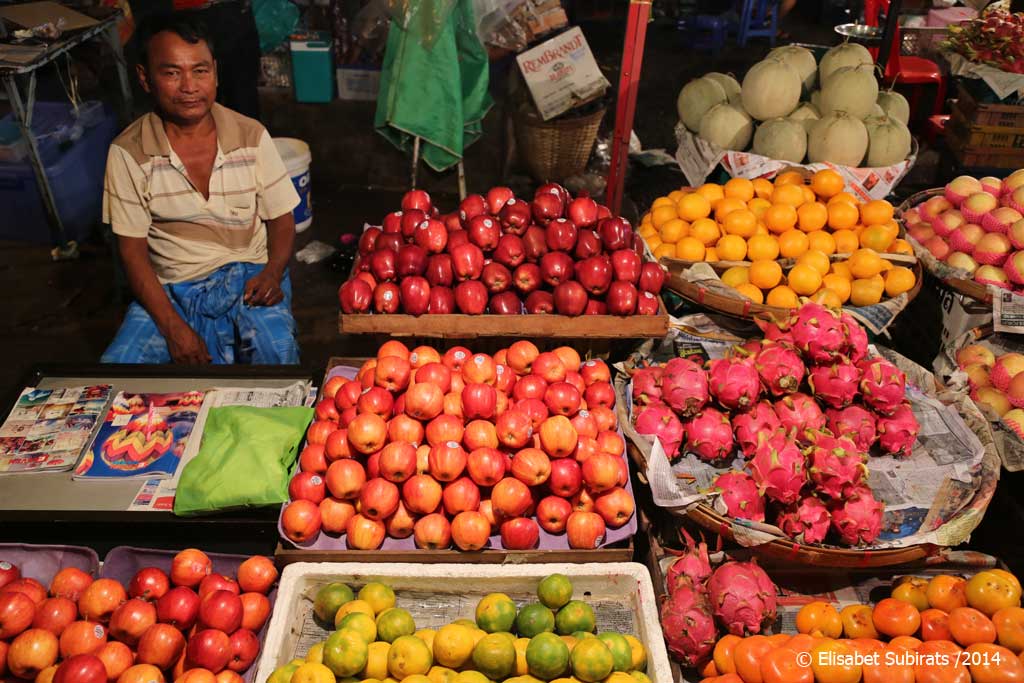 We left Yangon on the third day. In my opinion, Yangon hasn’t changed a lot: Sule Paya still regulates the city’s chaotic traffic, traditional teahouses are as popular as ever and it rains every day, so everything is ok! But Myanmar is much more than Yangon and it was time to go South . . .

There are more pictures of Yangon here :

Permanent link to this article: http://holaworld.fr/back-to-myanmar/