The Forbidden City is one of the two most savage experiences in Beijing (the other one is Beijing metro at rush hour). However I was curious about this place since I was a child so after a good breakfast I was ready for the challenge.

The construction of this huge city inside the city started with Ming Emperor Yongle in 1407 and took 14 years to be finished, employing about 200.000 men. It was the reclusive home of Ming and Qing Dynasties until the Republic overthrew the last emperor and was the earthly equivalent to the Emperor’s celestial domain. Each emperor, when crowned, added different halls and buildings for his comfort and today the complex has 72 Ha and about 800 buildings, all topped with the typical yellow roof, the imperial color. In the past, the price for entering the Forbidden City without royal invitation was your head. Today it’s only 65 Yuan, which is much more convenient than your head. 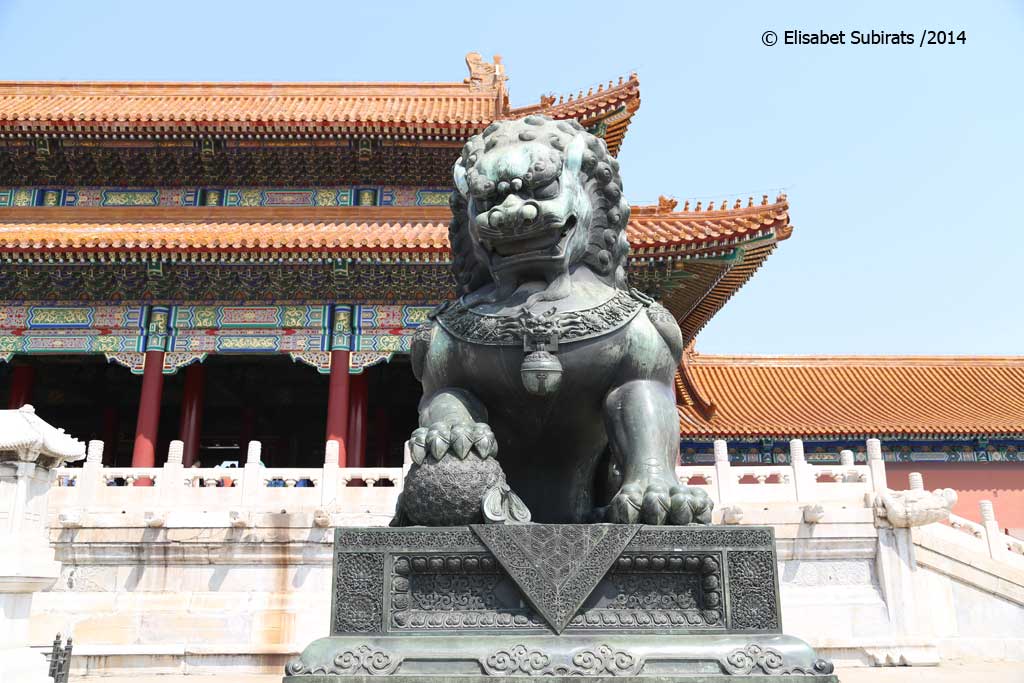 The entrance to the complex is on the South, through the Meridian Gate. This was the entrance reserved for the Emperor. People visit the site from South (where the Emperor took care of the country’s daily affairs) to North (buildings reserved for his family).

First good news of the day, this board: 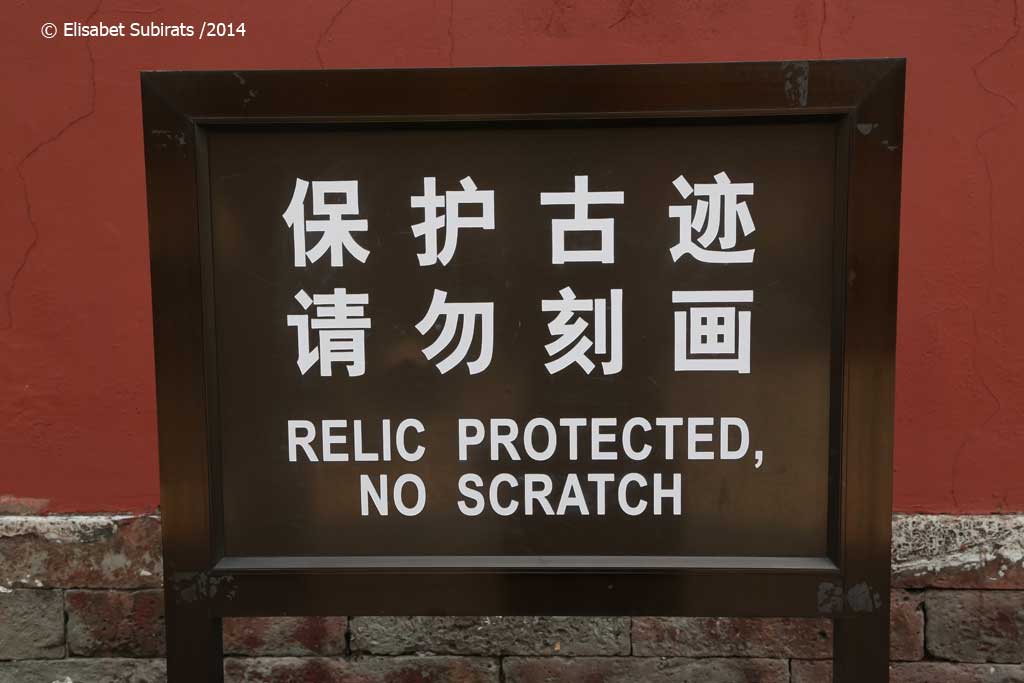 Whoever wrote this panel, thank you lol

As I said before, the visit to the Forbidden City is crazy. Crowds of Chinese tourists with their umbrellas following their noisy guide are everywhere. There are 5 main Halls (also called palaces) which can only be seen from its entrance doors and people push really hard to try to catch a glimpse of how royal life was.

This is what a Chinese can see about the main halls if he is not on the front row (notice that even under a roof, in the shade, they refuse to close their umbrellas). 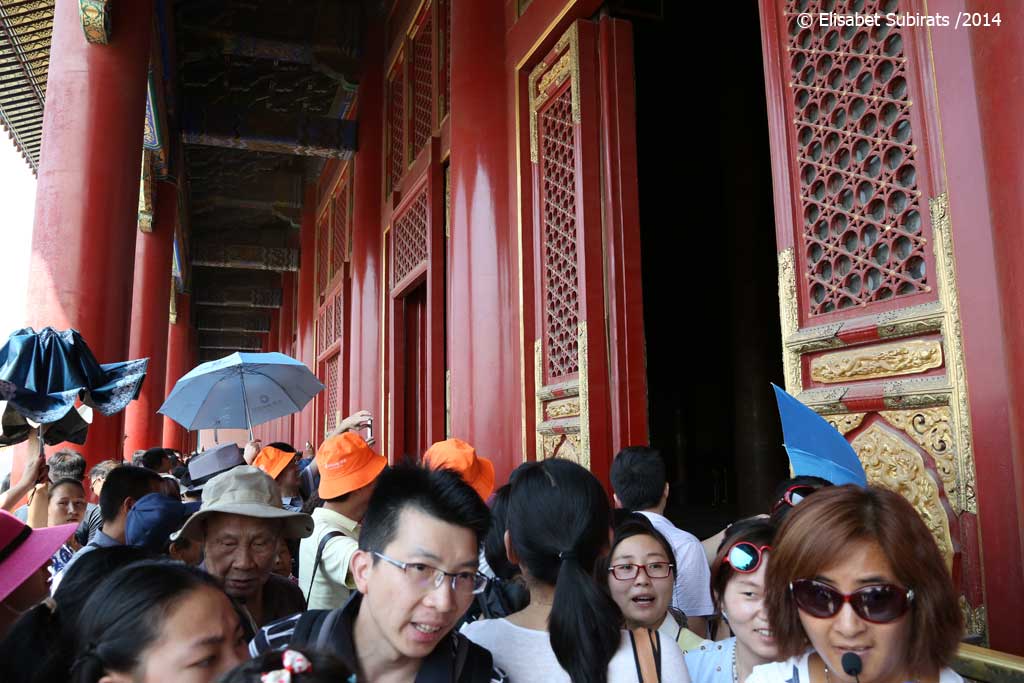 As I am taller than Chinese people, this is what I can see even if I am not on the front row 😉 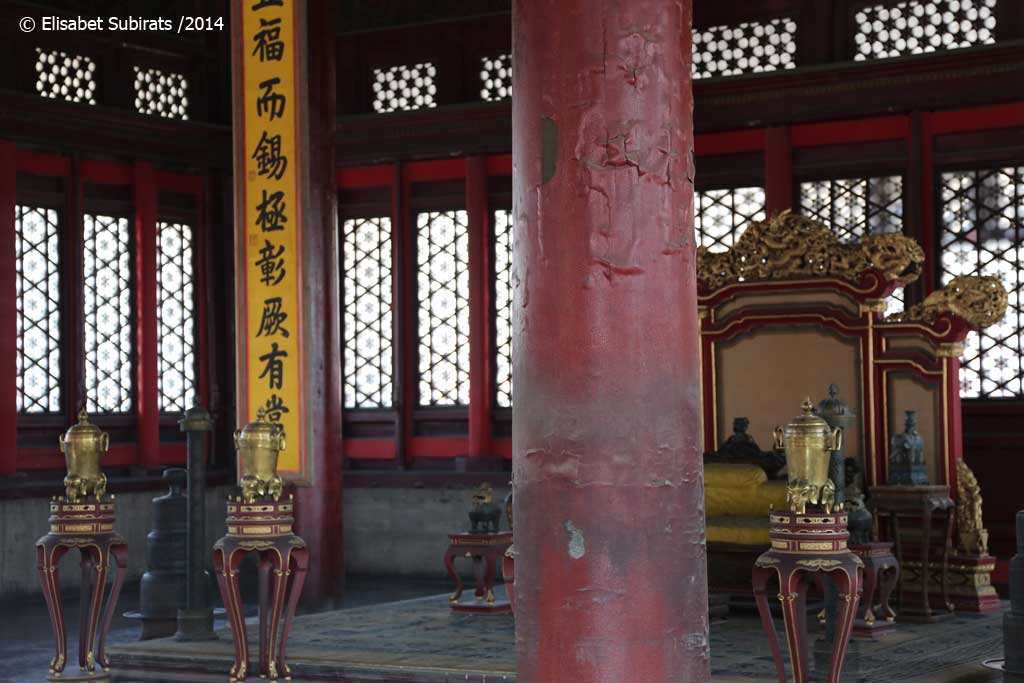 However photography lovers will find easily less crowded corners with good perspectives and that’s why I did after a while.

In the Forbidden City, there are other possible activities apart from sightseeing. You can for example do a flying tour over its roofs, like an emperor with magical powers . . 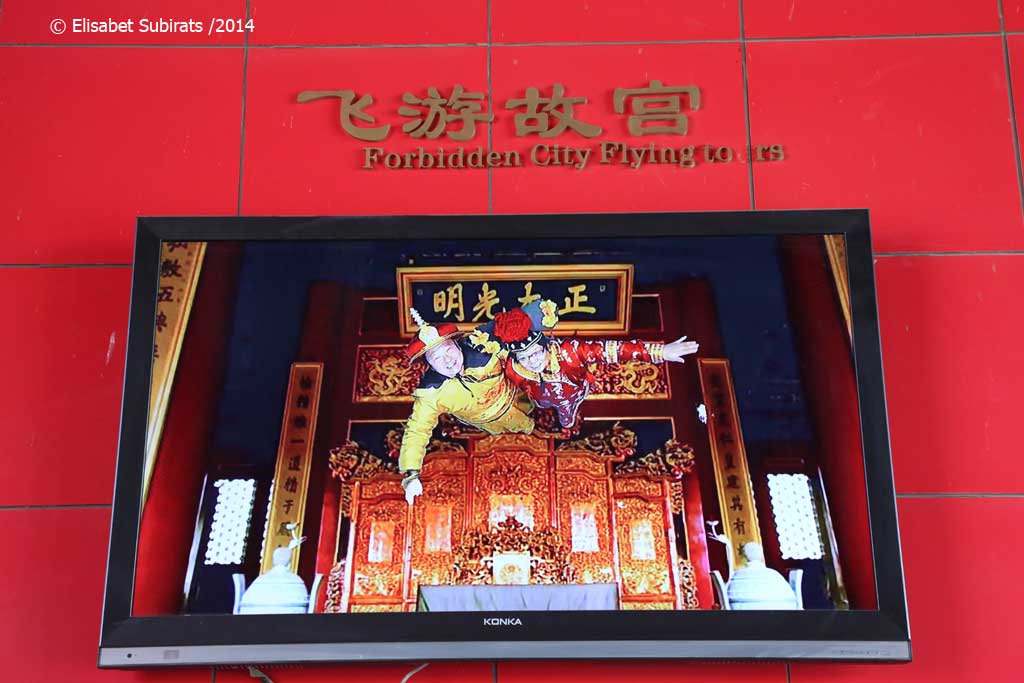 Or just dress like a royal and wander around the surrounding gardens, everything is possible in the Forbidden City! 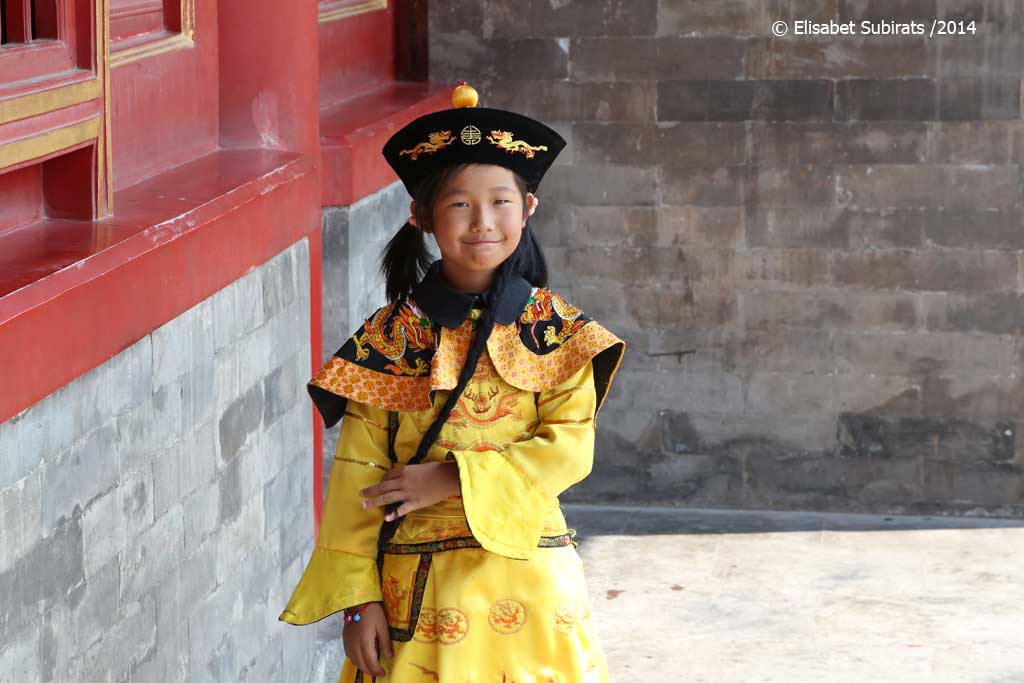 Without knowing it, I left the most beautiful and most impressive sights for the last day. In the morning Ilaria and I went to visit the Temple of Heaven and its park. Not far from the Forbidden City, this is where the most solemn rites to Heaven were performed by the emperor and his main officials. 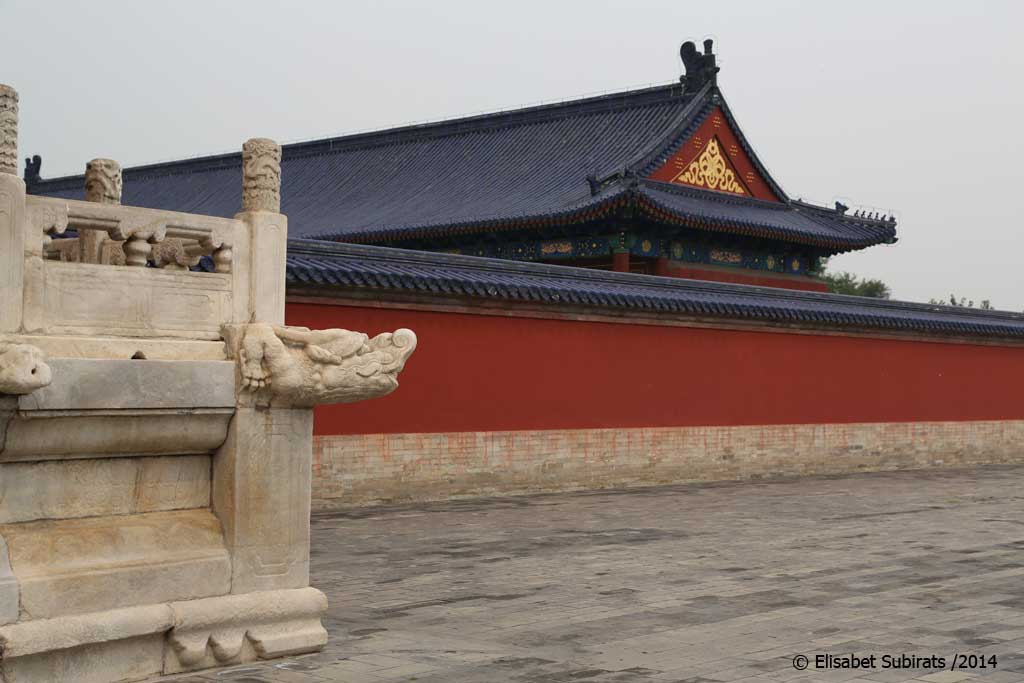 In this complex one can breathe Confucian symbolism and harmony everywhere. Built also by the emperor Yonglé, the North end of the park is quadrangular to symbolize the Earth while the South end is semicircular and slightly elevated symbolizing Heaven. The main buildings are located on this North-South axis. All finished with its blue tiled roofs (the color of Heaven) they are really beautiful. 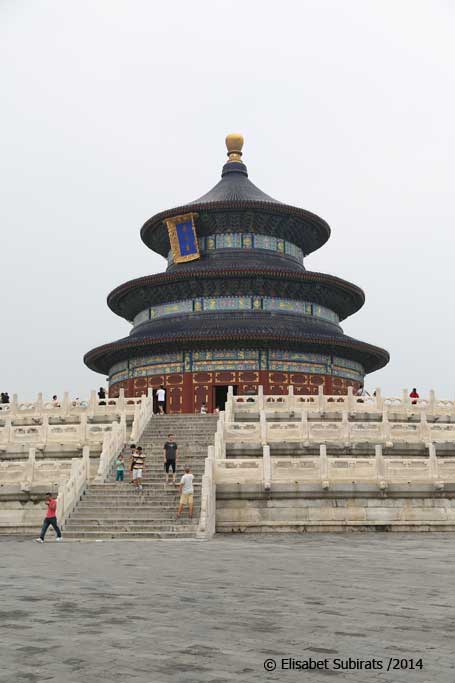 It seems that this complex is a popular spot for photographers and we could see different photo shoots that morning. I took advantage of all the photographers’ paraphernalia to have some fun me too. 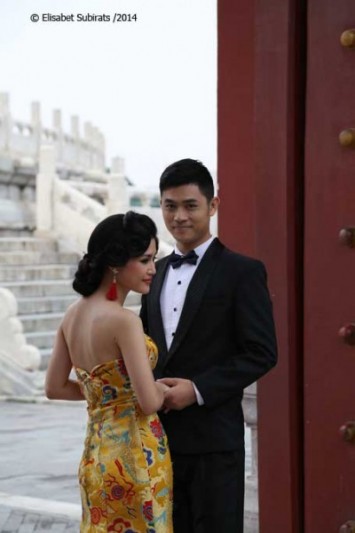 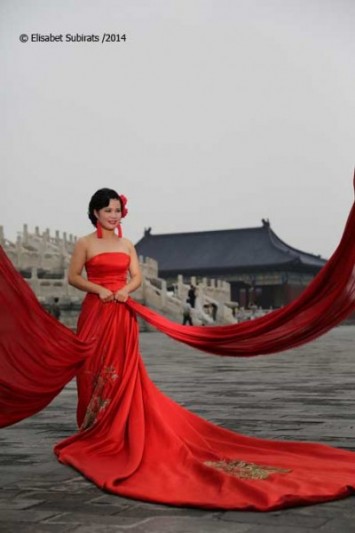 After lunch we went to Jingshan Park, just on the North of the Forbidden City. Its hills were created from the earth excavated to make the Forbidden City moat and it seems they also protected it from evil spirits and storms. From the top of the main hill there is the most impressive view of the Forbidden City and its golden roofs. It’s from here that one can realize how huge the complex is, actually the Forbidden City is the biggest complex of ancient wooden structures in the world. If you don’t feel like going with the crowds come directly here, this view is something not to be missed. 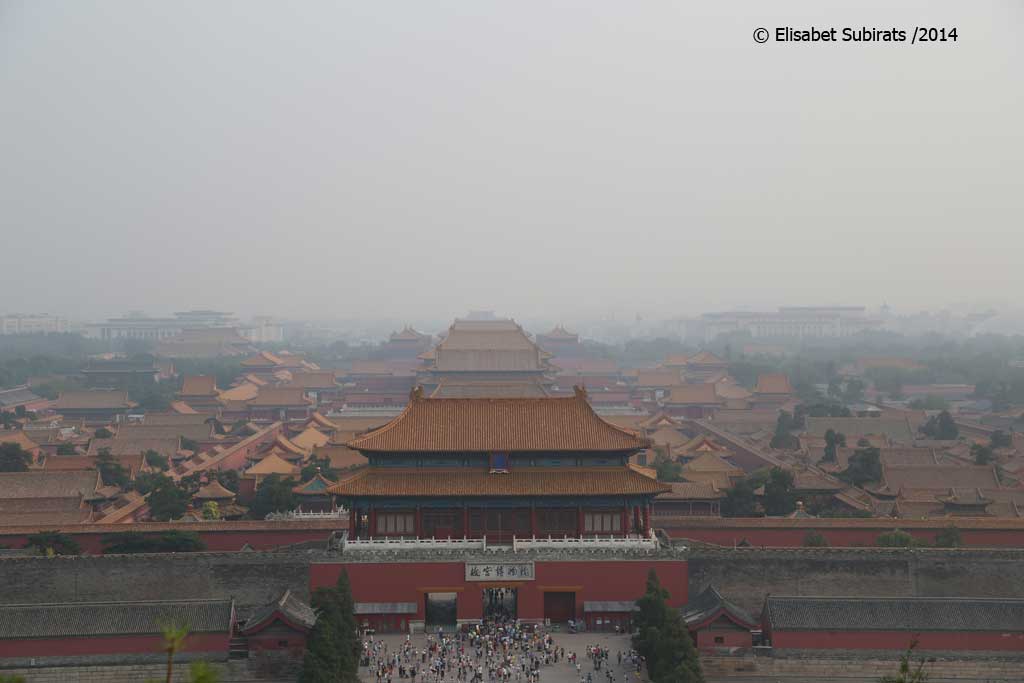 At night, it was time to leave Beijing by train. I had only seen half of what the city has to offer, just a taste of Beijing. But China is big, visa time is limited and there are other wonders out of the capital so it was time to go west.

Permanent link to this article: http://holaworld.fr/beijing-sightseeing/