A huge, overcrowded (21.150.000 people in 2013) and polluted China Town, Beijing is also an oven in summer time. However, being the cultural and political centre of one of the most ancient empires for more or less eleven centuries, Beijing has many interesting historical sights to visit.

First day was spent trying to fight against heat, tiredness and jet lag. I was not fit for major sights so I only visited few things around like Lama Temple (considered the most renowned Tibetan Buddhist Temple outside Tibet) and Confucius Temple, both located not far from where I was staying. I especially enjoyed Confucius Temple, a peaceful site with few tourists, beautiful pavilions and gardens and many shady corners to rest. This is China’s second largest Confucian Temple and also the academy where the emperor expounded the Confucian classics to a thousands of kneeling students. Since Daye Era, imperial officials were selected through a system of public examination and new admitted scholars had their name engraved on huge stone tablets which still can be seen today in the gardens of this temple, like a stone forest. 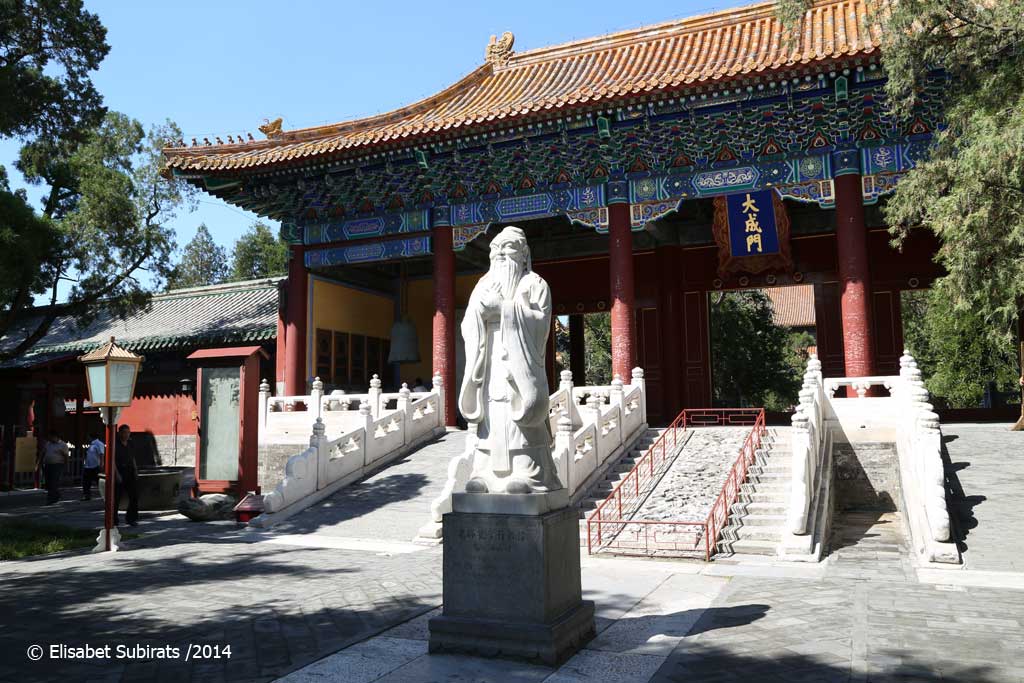 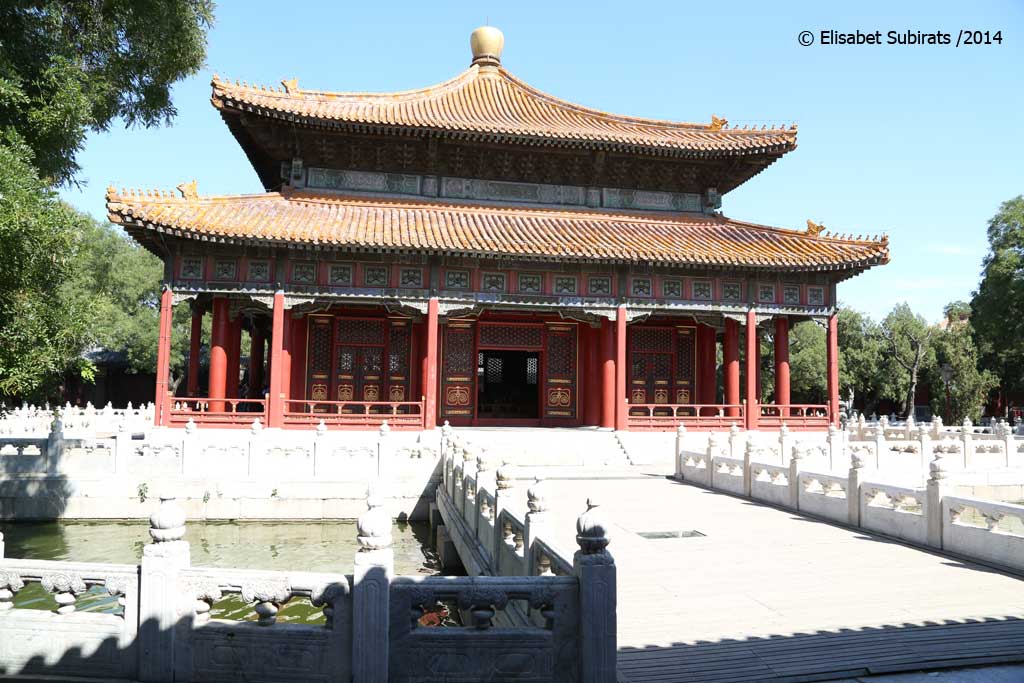 After lunch I went to discover the Hutongs of Beijing, the historical residential areas around the Forbidden City. In Beijing, hutongs are alleys formed by lines of siheyuan, traditional courtyard residences. Many neighborhoods were formed by joining one siheyuan to another to form a hutong, and then joining one hutong to another. From the alleys I could not see much, it’s just an ensemble of parallel and perpendicular streets with few ornamented gates from time to time but I tried to go into one of this gates and inside the siheyuan’s structure was much more interesting, even intriguing. Sadly most of these hutongs are much deteriorated with only few exceptions like Nanluogu Xiang (maybe too much restored) which has become a tourist magnet full of western cafes and souvenirs shops. Maybe I prefer the deteriorated alleys. 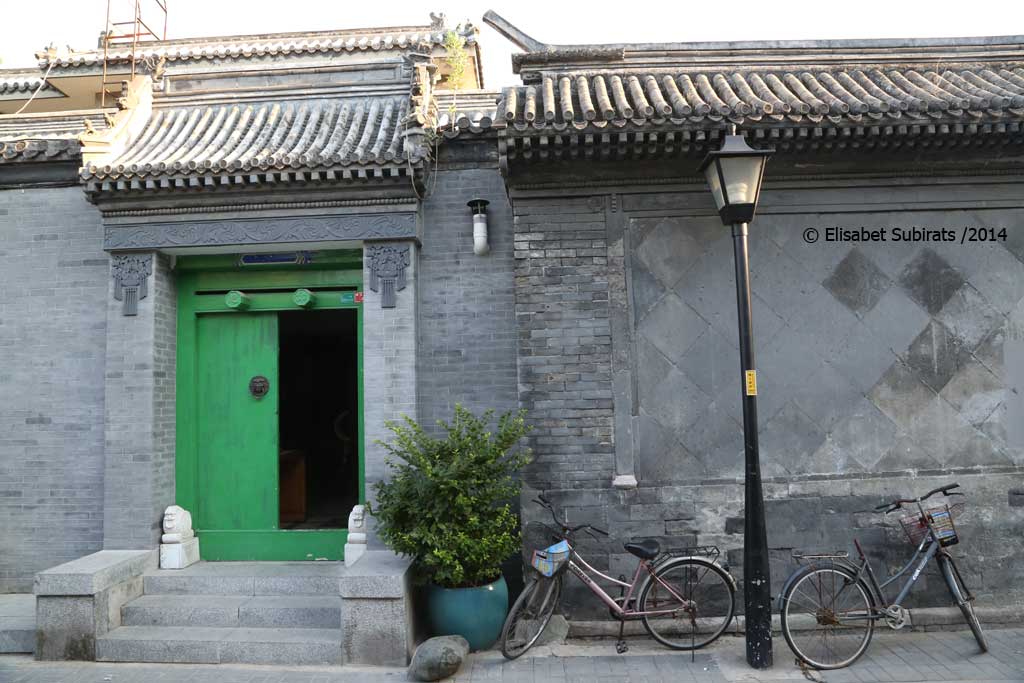 After the foundation of the People’s Republic of China in 1949, many old hutongs in Beijing disappeared (and are still disappearing) to be replaced by wide boulevards and high buildings. It is a pity because they offer a glimpse of how was Beijing during the past generations.

But Beijing not only has traditional architecture so I headed to the Olympic Park to see some contemporary buildings. If you wondered why steel’s price exploded before the Beijing Olympic Games the answer is here: meters and meters of concrete and steel on a huge park – avenue with no soul. 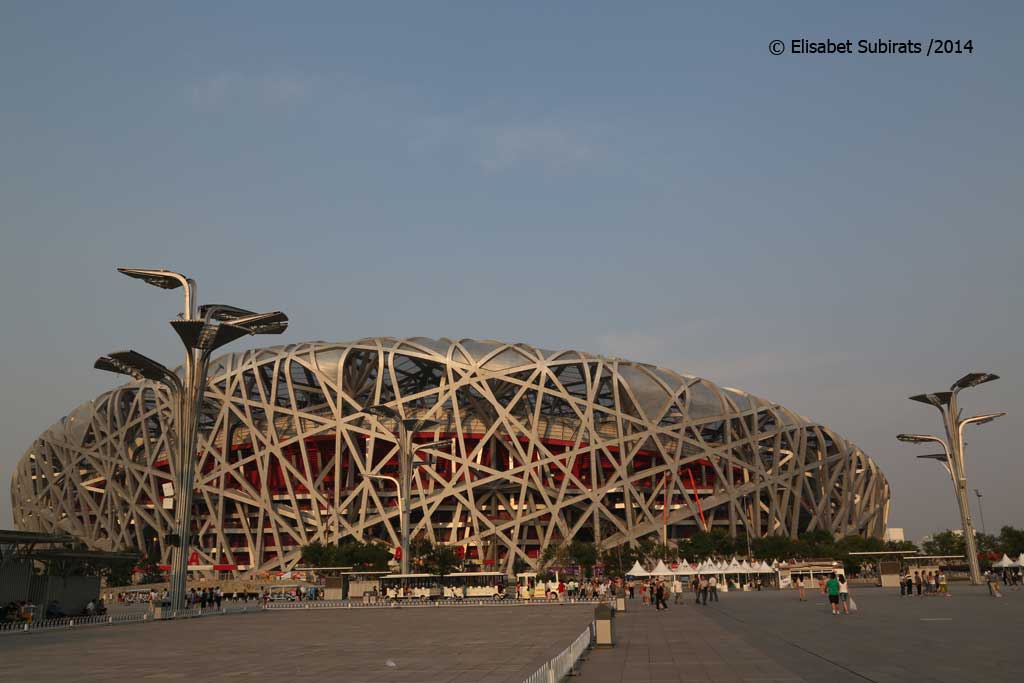 The most emblematic constructions are the Beijing National Stadium (the bird’s nest on the picture above) and the National Aquatics Centre or water cube. The second one has weird facades-bubbles which must be more interesting when illuminated at night. It was designed by a partnership of Chinese + Australian architecture firms. The Chinese contributed to the project with the symbolic design and proportions of the building while the Australians added the bubbles, lol. These bubbles turned out to be very inspiring because in this cube swimmers broke 25 world records during the 2008 Olympics. 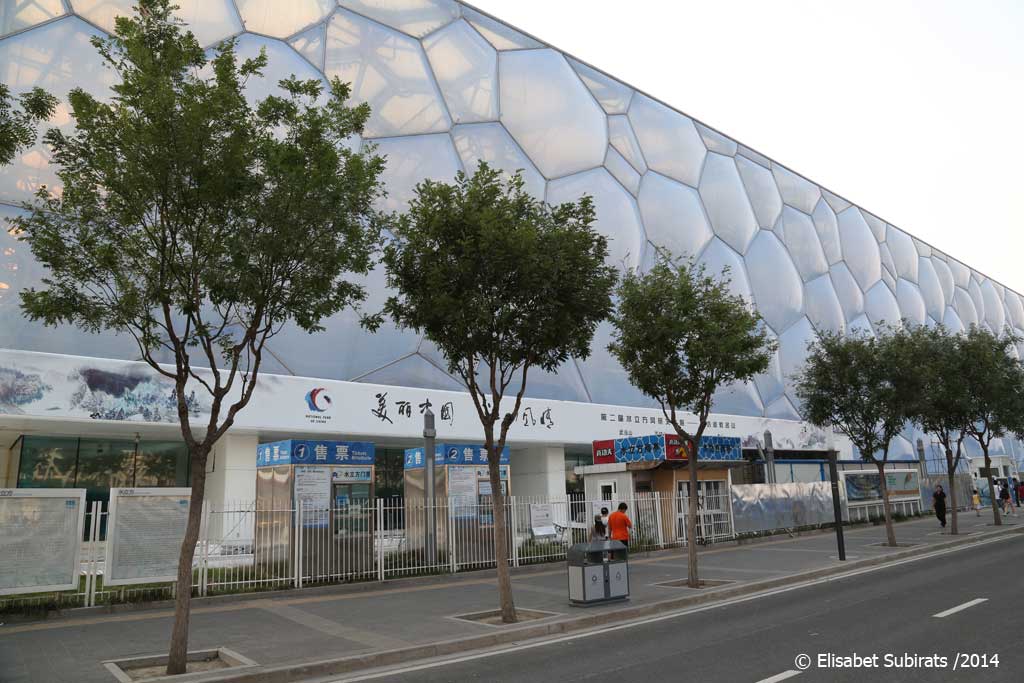 Night Markets? Yes, Dong’ Anmen Night Market was the best! I enjoyed particularly the food stalls where locals can enjoy some peculiar staples. 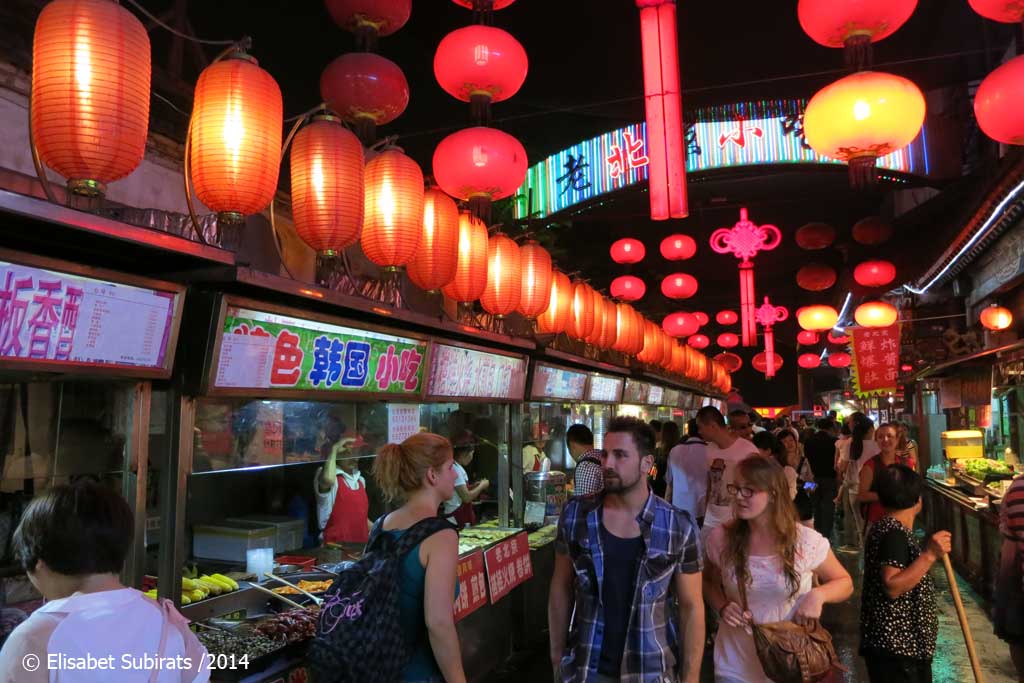 These little ducks are Beijing’s local specialty, aren’t they cute? Now I understand why all ponds in Beijing are empty of animals, 😉 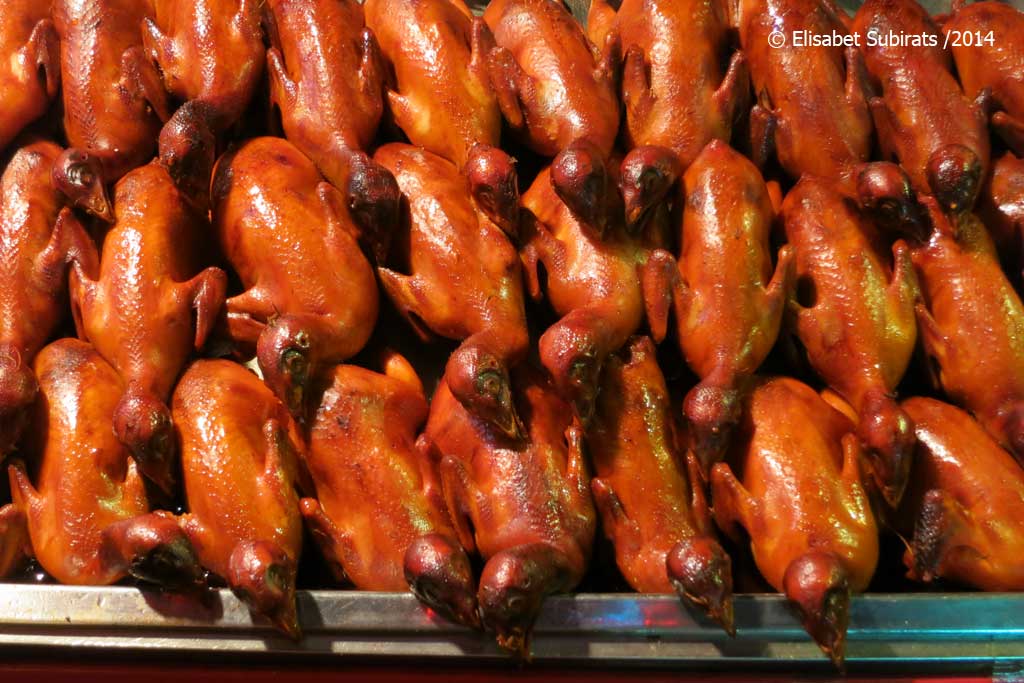 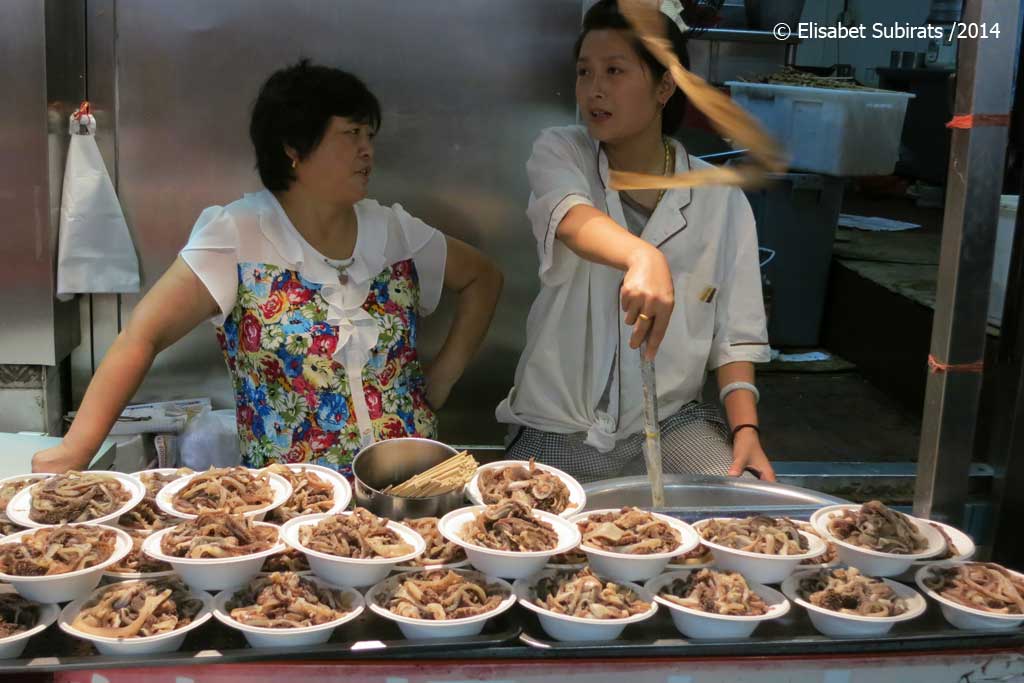 Or maybe you prefer a little scorpion, a grasshopper or those little insects saying hi! with all their legs? So much to taste! 🙂 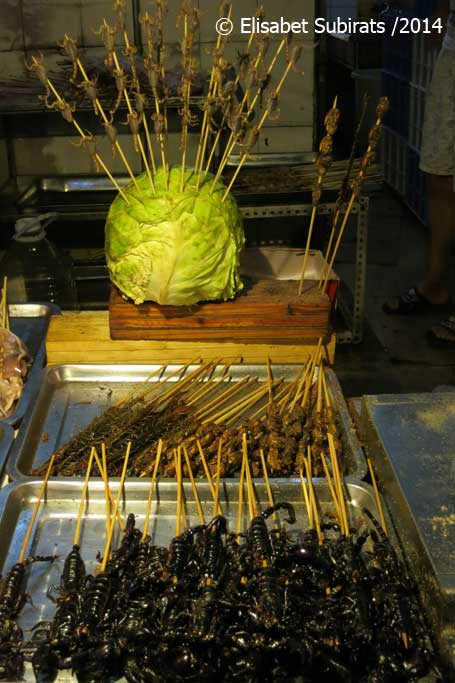 Permanent link to this article: http://holaworld.fr/biggest-china-town/