Manaus and the jungle

Down the Amazon River

When I was preparing the world tour, sailing down the Amazon was one of the musts of this trip. Of course, I knew it was not Francisco de Orellana‘s or Aguirre’s big adventure any more but I wanted to live for a few days this life on the boat with the Amazon as our only reference.
Seeing the Amazon Forest for the first time from a plane is priceless and also difficult to describe: it’s a neverending beauty. From Bogotà I landed at Leticia, Colombia, where I spent two days basically doing all the arrangements for the boat trip.
Boats leave from the other side of the border, from the Brazilian town of Tabatinga. One can go from Colombia to Brazil without any kind of control, there is no formal procedure as long as you don’t want to go further. There is not much to say about Tabatinga, a small harbor town which surprisingly had more churches than boats but hey, it was my first contact with Brazil so it was cool. 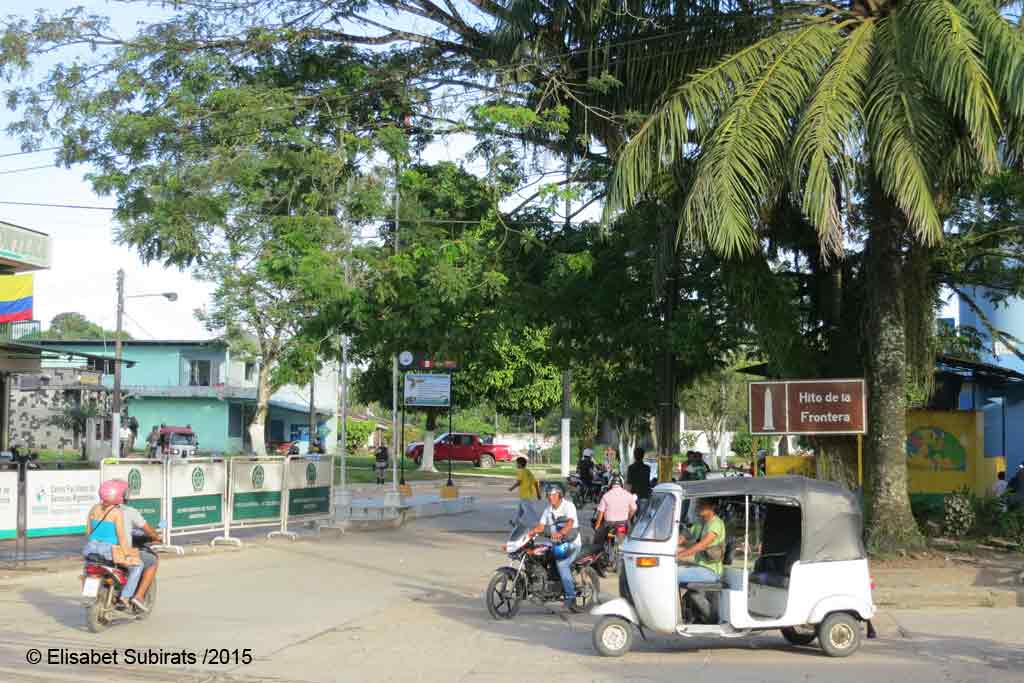 kind of border between Colombia and Brazil

There are 2-3 boats a week leaving Tabatinga to Manaus so unless you have unlimited time to wait, you will take the first one to leave so the “boat thing” is a kind of lottery. The boat leaving next was Manuel Oliveira, a big new one which looked very clean, safe and with lots of space. The only “bemol” about this boat was that, being an Evangelical boat, alcohol was prohibited so no sunset beers on the Amazon.
The day before the big departure was spent doing paperwork and shopping and the best way to do it was by motorbike because it was faster, cheaper and funnier. First stop: Leticia’s airport to get the Colombian exit stamp. Second stop: Tabatinga’s harbor to buy the tickets. Third stop,  back to the border to get the Brazilian entry stamp but wait, no, the office moved to Tabatinga centre so had to take the motorbike, which was parked on the Colombian side, to go to Brazil again . . . Last stop was in Tabatinga market area to buy the hammock and some fruits for the trip.
The departure day finally arrived and I was the first to arrive to the harbor to get a good spot for my hammock. This is very important because having a good or bad spot on the boat can condition your trip. Despite being a big boat it was very crowded but I was hanging next to a pillar so I had enough space. 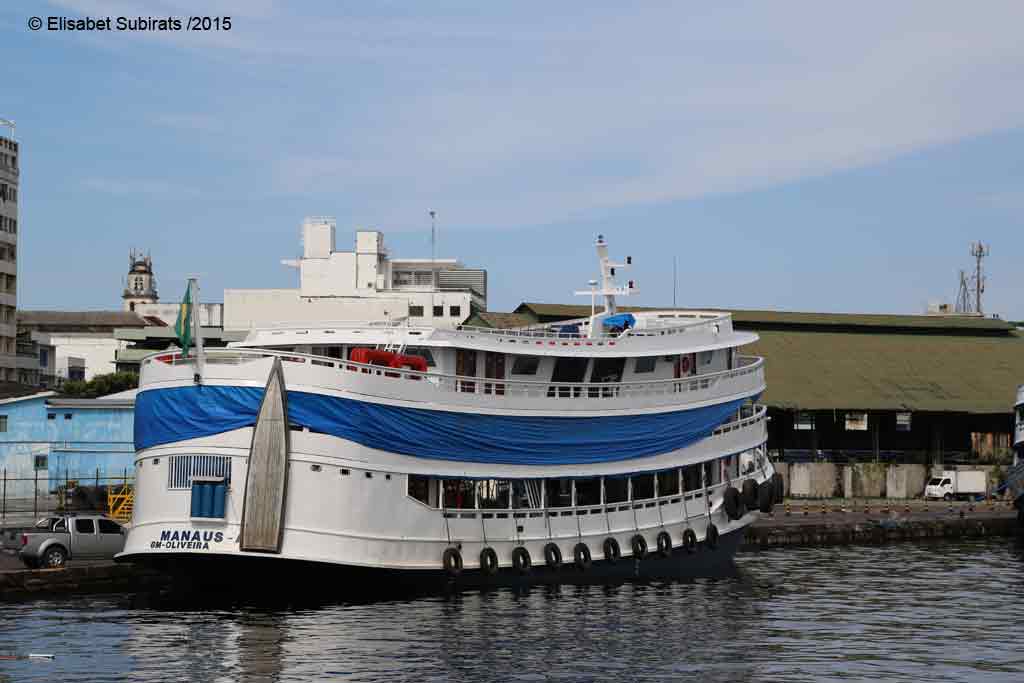 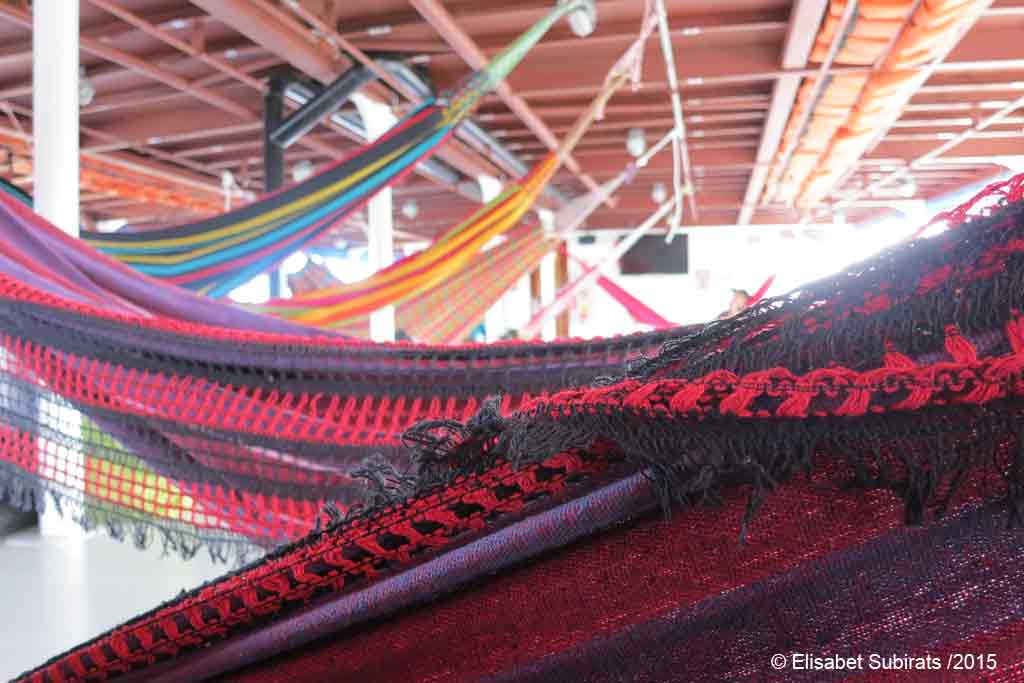 view from my hammock

Life on the boat was very simple: wake up with sunrise, some stretching exercises (necessary after a night sleeping on an hammock), shower and breakfast at 7.00 am. After that I went to the upper deck to study Portuguese, work on my blog or just read, activities that were interrupted from time to time by the amazing landscape on the river banks. 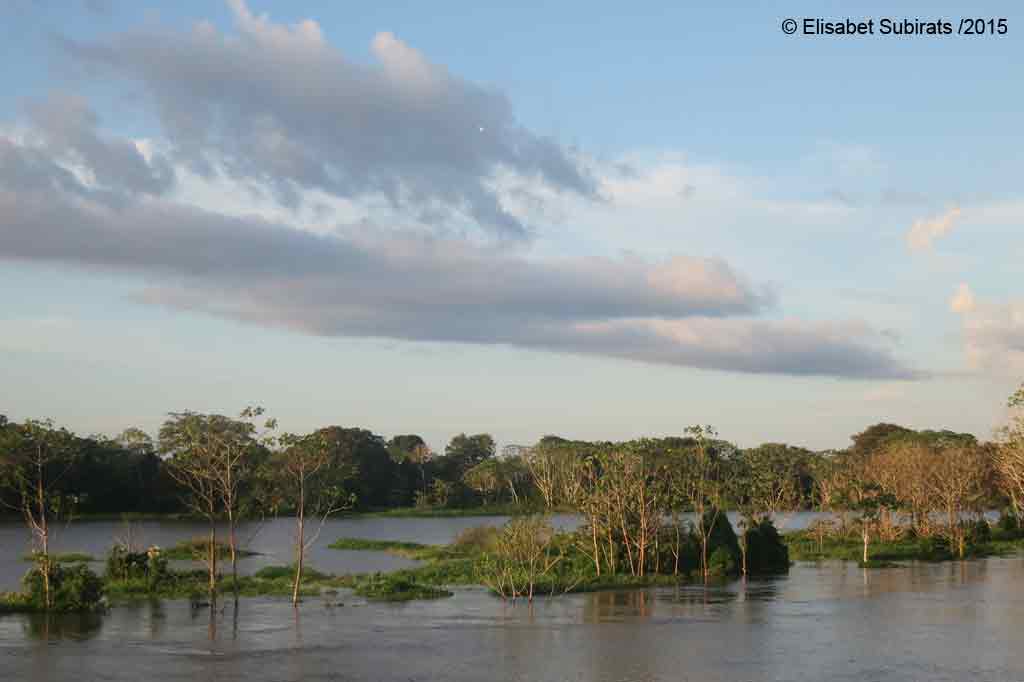 Before the boat trip I read some blogs about it and all recommended to sail upstream. It is a slower trip but the boat gets closer to the river banks to use the river currents so it is possible to see more. As I decided to sail downstream, I did not have big expectations about the sightseeing part of the trip and I concentrated myself on the human part of it (life and people on the boat). However I was happy with what I saw because from time to time the river got narrow enough to see the shores plus we did some stops on the way with time enough to see a little bit of local life. 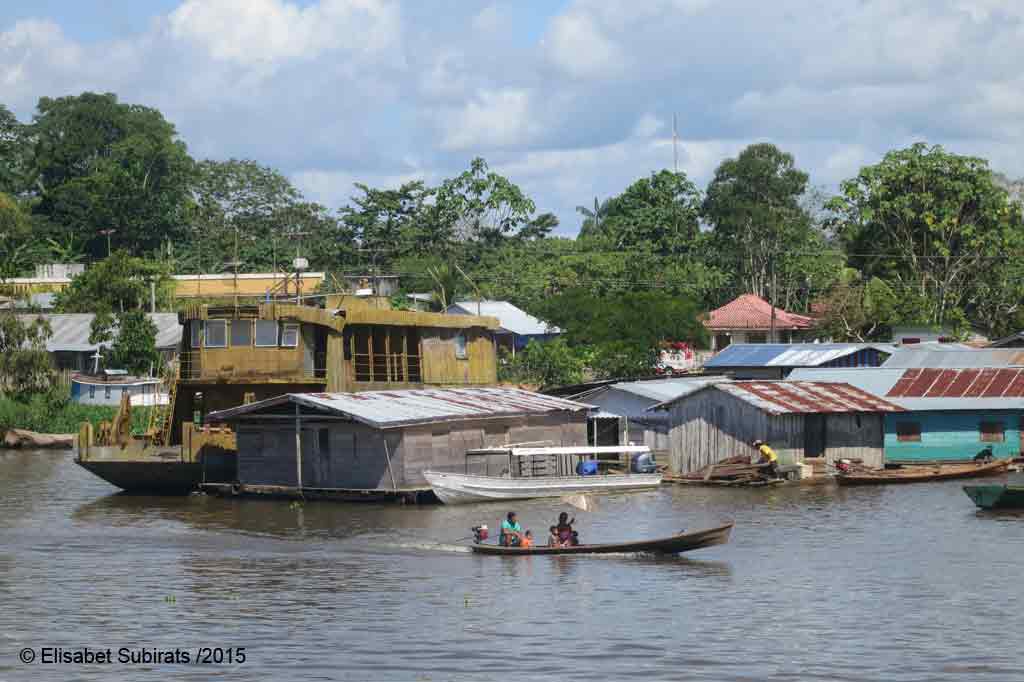 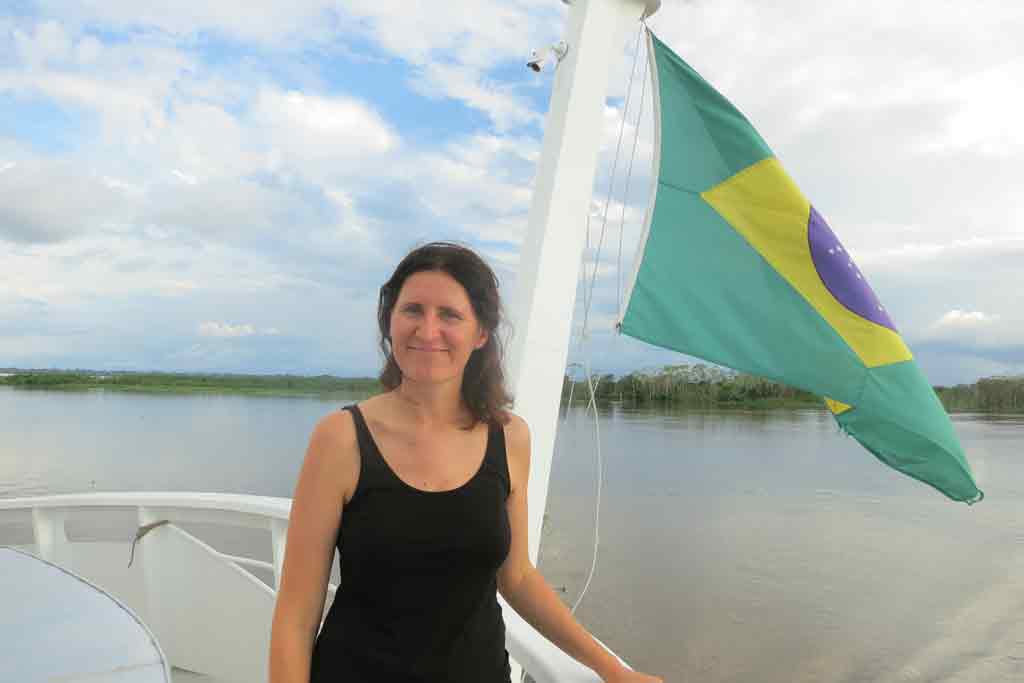 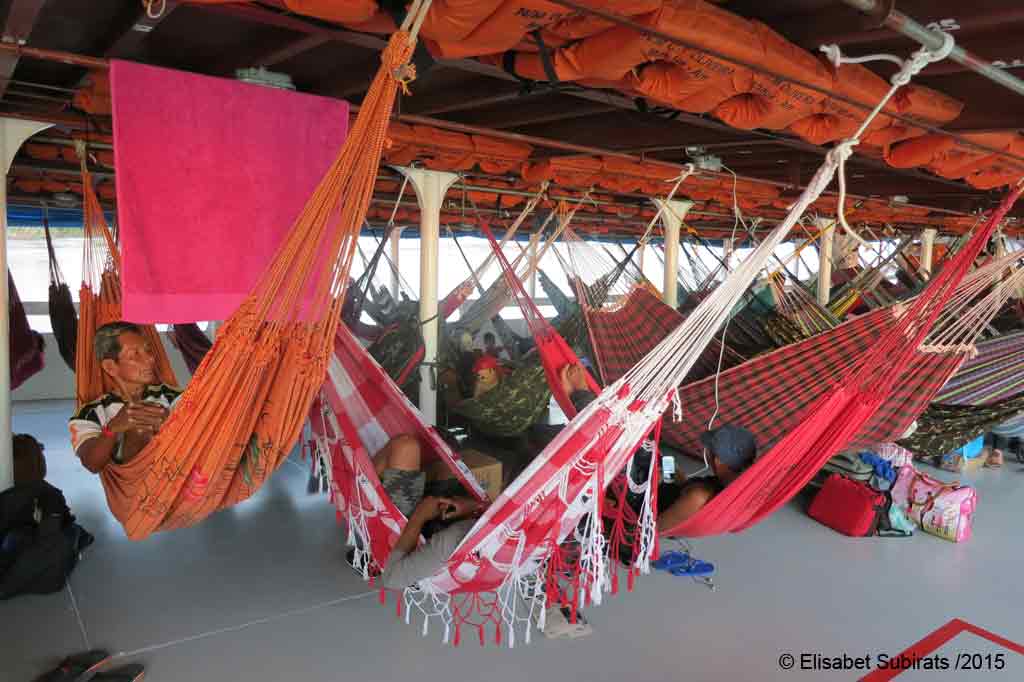 Lunch was at 12 and after that there was usually a nap on the hammock, some chat with the neighbors (good to practice Portuguese) or “soap opera” (telenovelas) watching until 6.00pm, when the dinner was served. After dinner it was time for sunset watching, again on the upper deck. Sunsets in the Amazon, if there are no clouds, are amazing and as you can see on the picture river and sky come together on the horizon so you can’t tell exactly where one begins and the other ends. 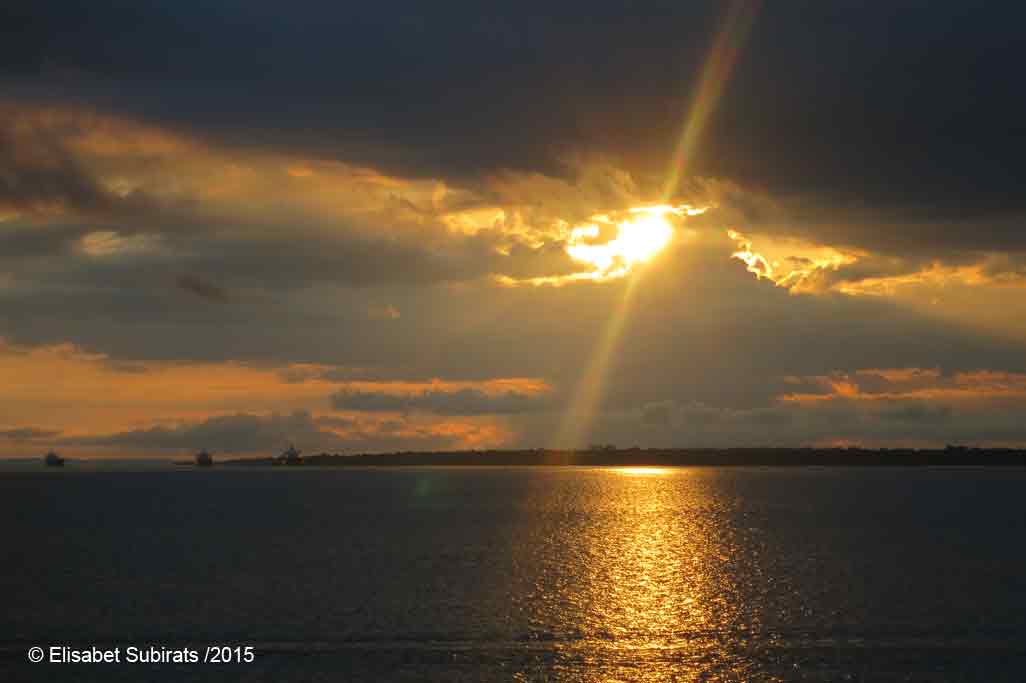 In this relaxing way we arrived to Manaus in the morning of the fourth day.

Permanent link to this article: http://holaworld.fr/down-the-amazon-river/