Chilling out on the shore of Lake Tana

Harar is a place apart in Ethiopia, far away from the North Historical Route (the main purpose of my trip). This place has always been a crossroad for commerce in India, Africa and Middle East. During XVIIth and XVIIth centuries Muslims, who were already there one century before, converted Harar in a cultural and religious focus being considered Harar the forth holiest city of the Islam. For years and years Harar was a closed city for the unfaithful and the adventurer Richard Burton only could enter the city dressed up as an Arabic merchant in 1854. Later, in 1875, Egyptians took Harar and opened it to international trading companies. This is why many foreign merchants – Arthur Rimbaud between them – could enter the city only with the Egyptian Administration’s OK. You still can feel the colonial atmosphere from those years in many corners of the city.
I went to Harar because my travel mate wanted to follow Arthur Rimbaud’s steps. It is a long day trip from Adis Abeba by minibus only entertained by terrific landscapes and co travelers’ laughs after eating their chatt dose. But there is not much left from Rimbaud apart from some objects and old photos in a house (turned into museum) which never belonged to him. 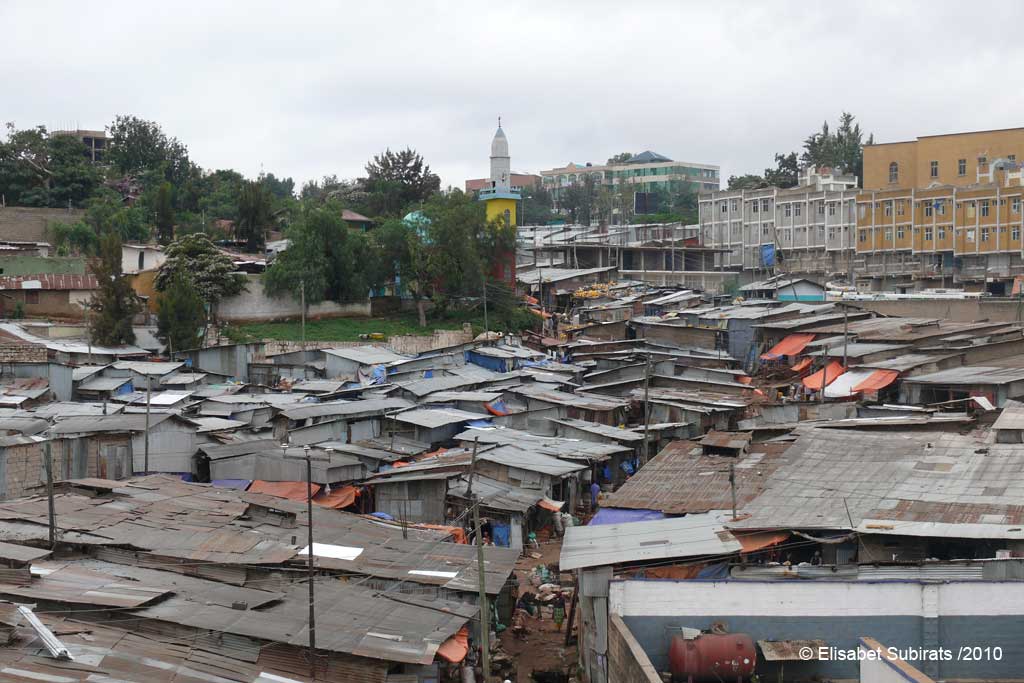 In 1887 the city surrendered to Emperor Menelik II but the Hararis have always kept a kind of ethnic and cultural independence and own language until our days. This is the interest of a visit to Harar: its old markets and streets where there is always something different to see and smell, crooked minarets, colorful houses or just a little bit of people watching from a terrace, always with a beer. 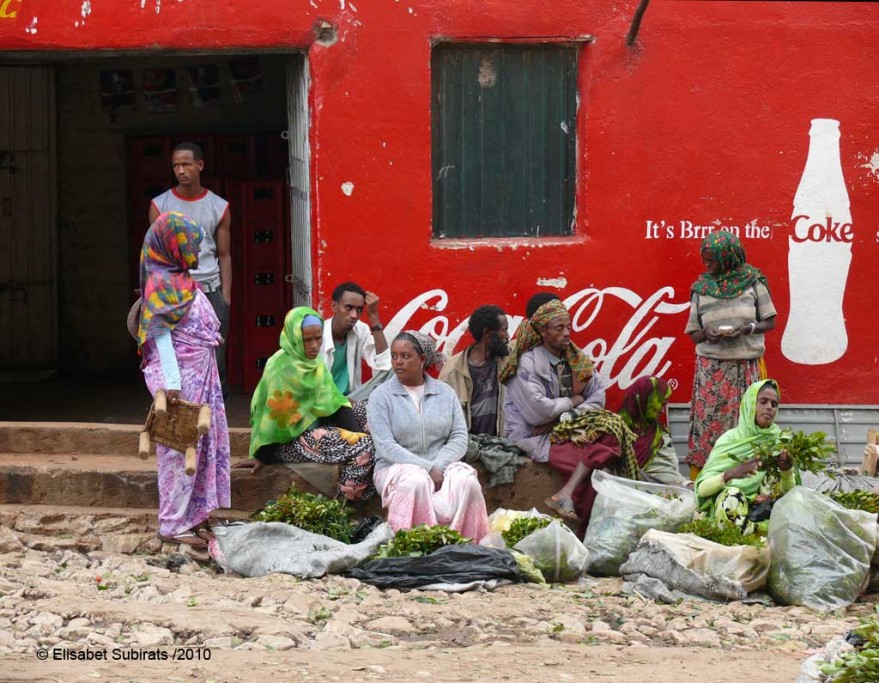 One full day in Harar was enough for me  to catch the spirit of the city and visit its main spots. Harar by day is a busy, brilliant and noisy city. The colorful souq is an immersion to the Harar’s everyday life with interesting smells and colors. 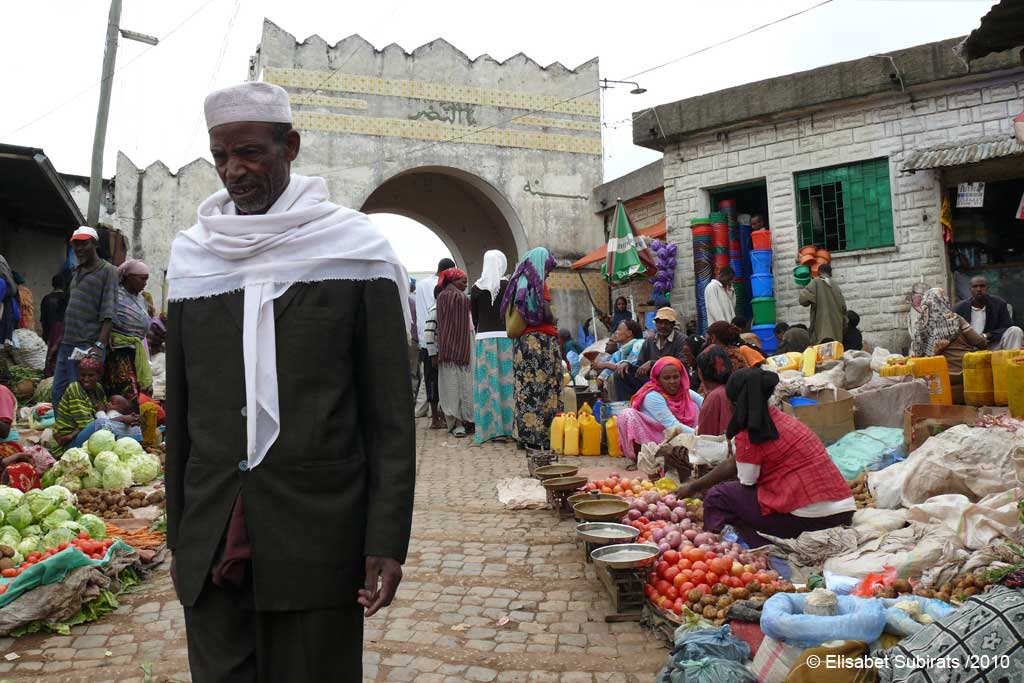 I took my time also to explore the city’s narrow streets and the walls around it: even if the architecture is very poor, with almost no details, there is always a surprise around the corner. 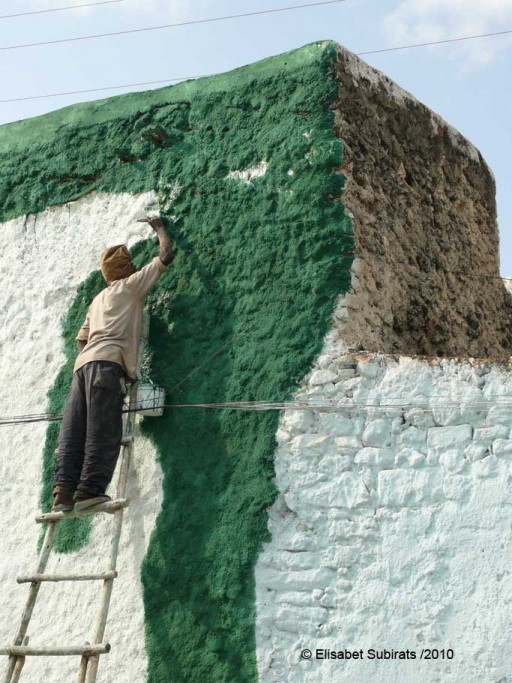 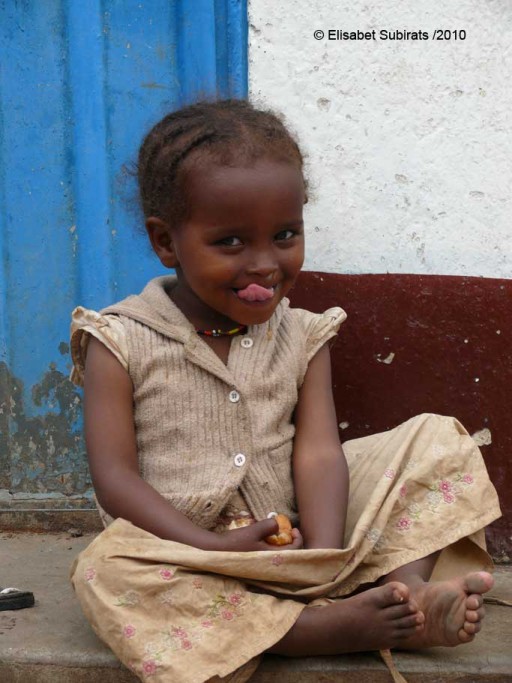 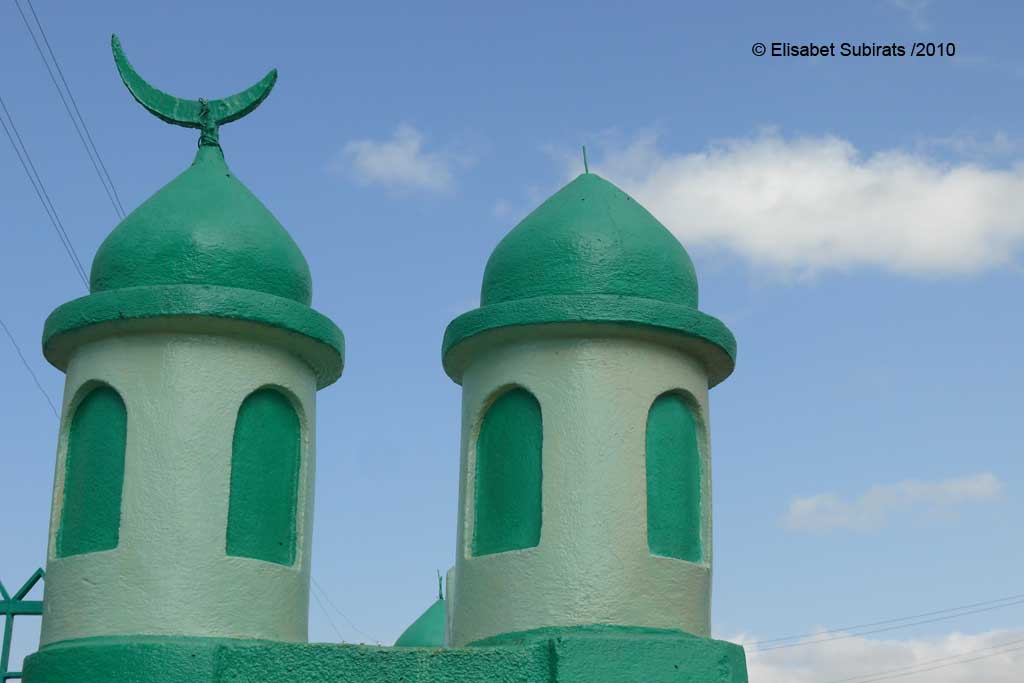 Crooked minarets are always a reference dot on the skyline and also put some color to the flat ensemble. I found very interesting the Sewing Machines Street where all the tailors work on the streets in front of their workshops. 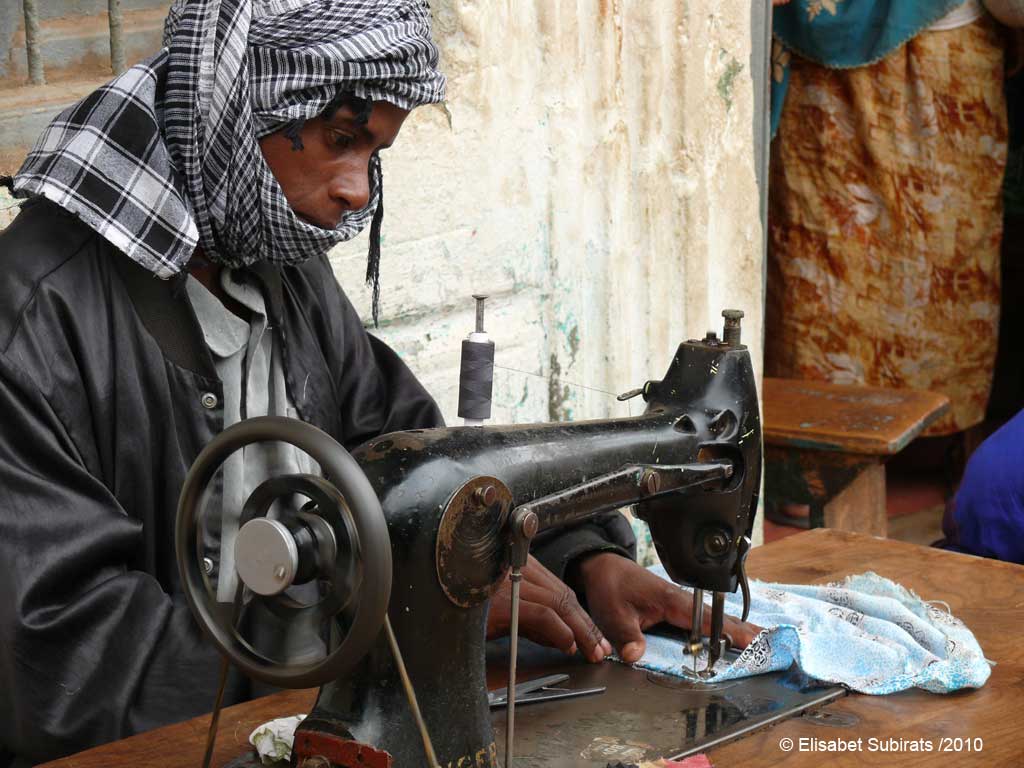 Rimbaud’s House was for me only an opportunity so see some Rimbaud’s stuff in a beautiful colonial architecture. The girls on the picture are not Ethiopians but Somalian tourists, easily identified by their features and typical clothes. 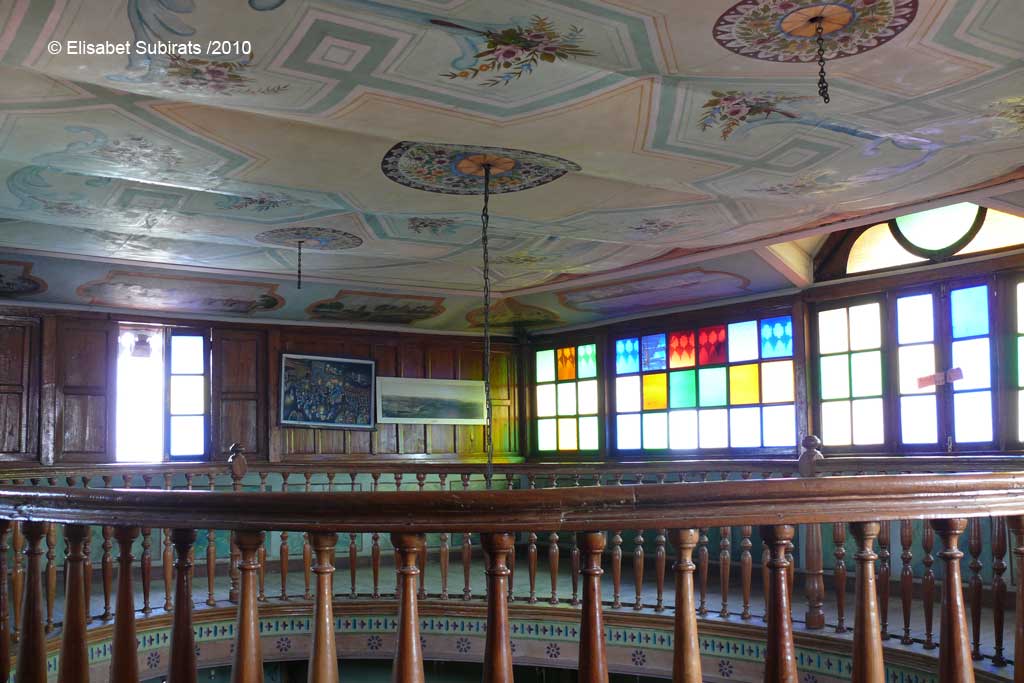 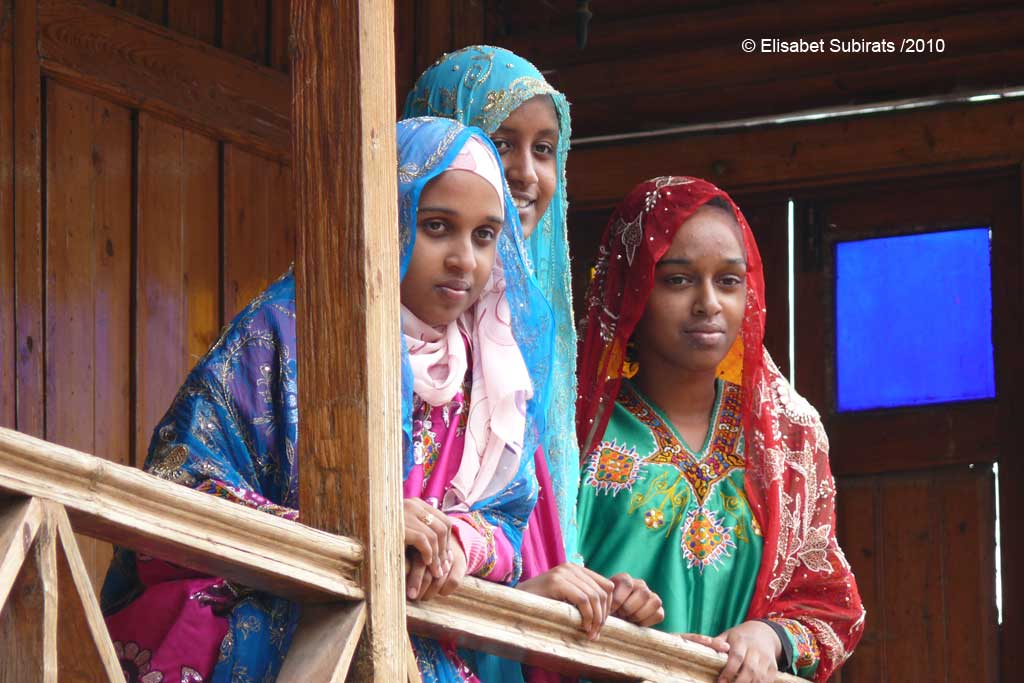 Harar by night is dark and lonely. Outside the walls there is still some life, with last people selling chatt and the hyena feeding show for tourists, that I did not want to watch. Inside the walls red light pubs open its doors widely, even in Ramadan time. It’s also prostitutes’ turn, who don’t mind to smile and look brazenly at men-foreigners even in presence of their female partners!

Permanent link to this article: http://holaworld.fr/harar-the-holy-muslim-city/