Jakarta and temples of Yogyakarta

I started my Indonesia tour with style. In Jakarta, I stayed the first two nights at Amine’s. We had worked together in the past and now he is working in Jakarta as expat, I was happy to see him again! Amine not only proposed me his beautiful guest room with amazing views of Jakarta, I could also use his private driver for sightseeing while he was in the office, so cool! I spent the day visiting the city, from Monas Monument to Kota, where one still can find some Dutch colonial architecture. 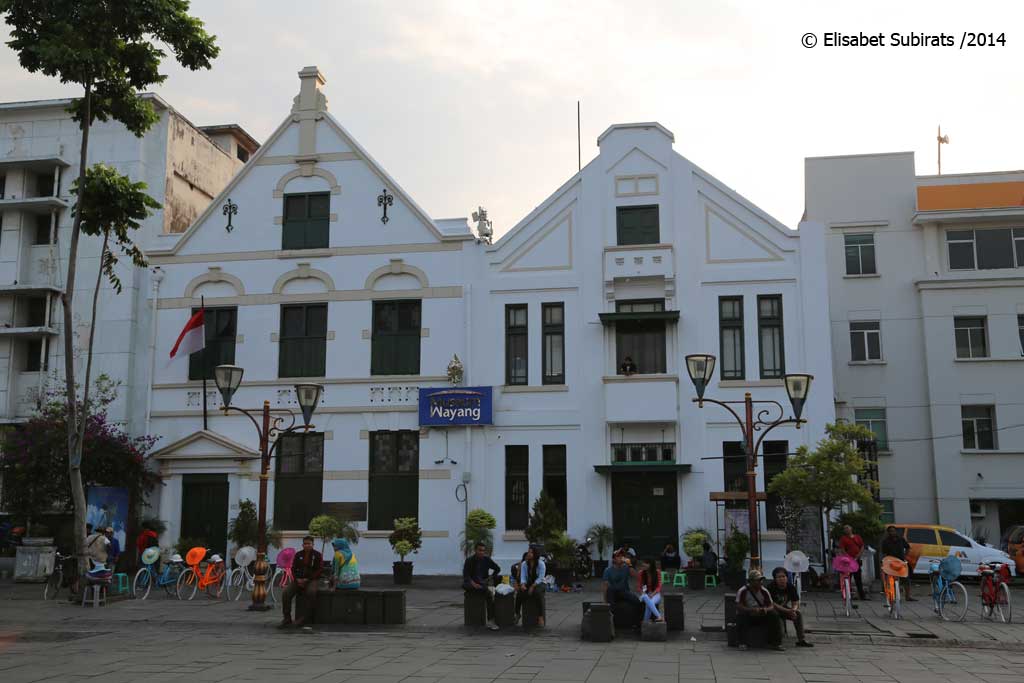 Jakarta is famous for its nightlife and after work Amine tried to show me a little bit of it, in Kemang village. It was Tuesday night so there were not many people around but that not prevented us from having a good dinner and playing pool in one of his favorite restaurants. It’s a good thing that we are better planning engineers than pool players, ha haaa. I had a great stay in Jakarta, thanks Amine!! 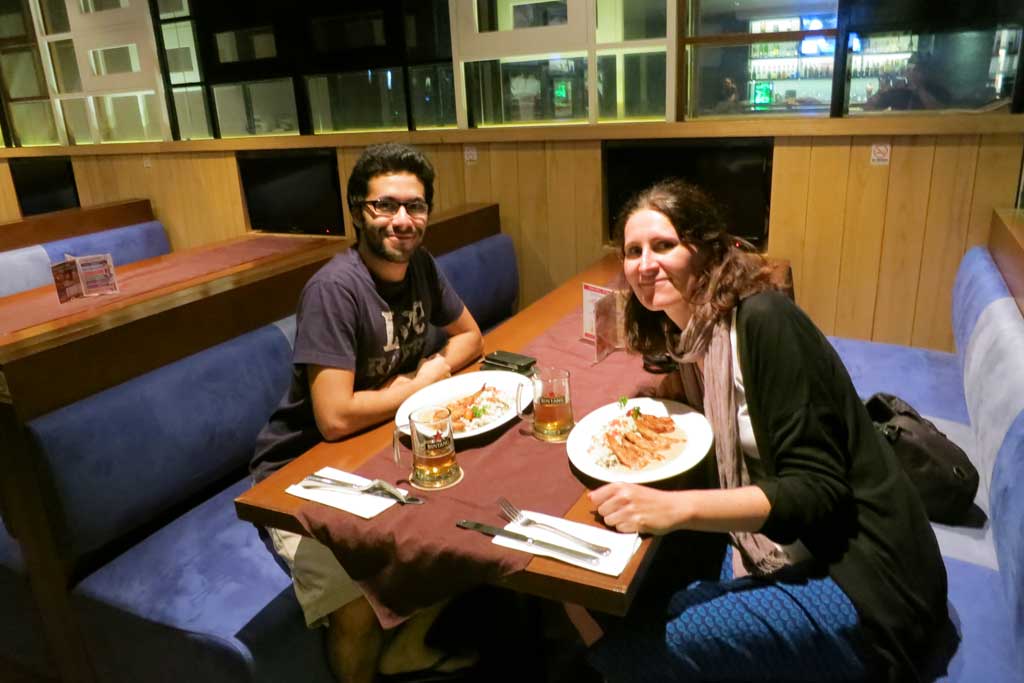 After Jakarta I took a train to Yogyakarta, the cultural heart of Java. Yogya is not a beautiful city but there are many things to do around. I found a nice guesthouse with swimming pool and a super atmosphere for backpackers and that’s when I forgot about the rest of the world and this blog . . 😉 I spent in Yogja a total of 6 nights.

On my first day in Yogja I went to visit the temples of Prambanan, the best remaining examples of Java’s Hindu period, built between VIII and X th centuries. The three main temples are dedicated to Shiva, Vishnu and Brahma. I found especially interesting the carvings on the inner walls of Shiva Temple which tell the story of Ramayana. 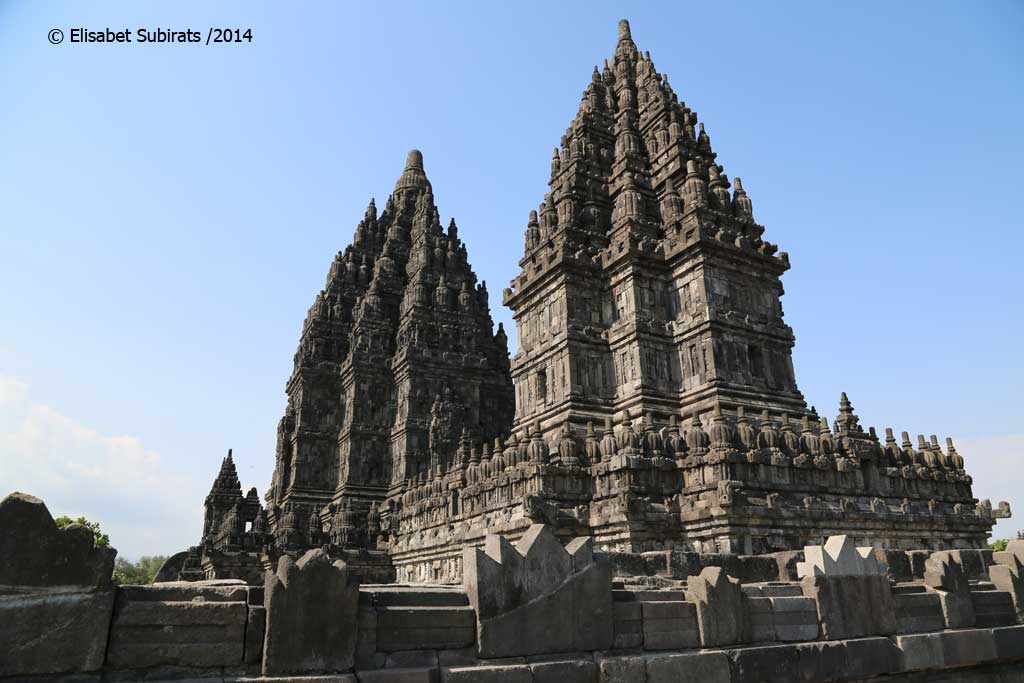 In Prambanan there are also Buddhist temples, maybe because sometime in this period the Buddhist dynasty who ruled in the South and the Hindu dynasty ruling the North were united  by a marriage. It is interesting to see the differences in architecture and sculpture between these temples. 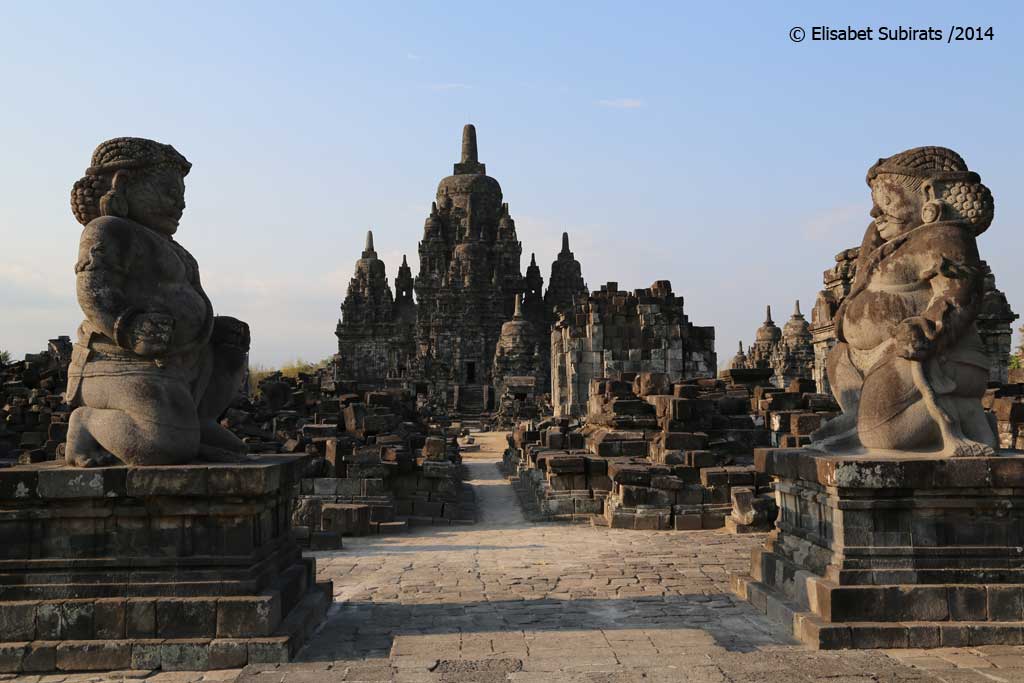 I stayed in Prambanan until night to see the Ramayana Ballet. This group of dancers and gamelan musicians perform the Ramayana (one of the great Hindu epics) with the illuminated temples as background almost every night for the last 25 years, a record! I enjoyed this Javanese show a lot and at the end of it we could join the dancers for some shots. 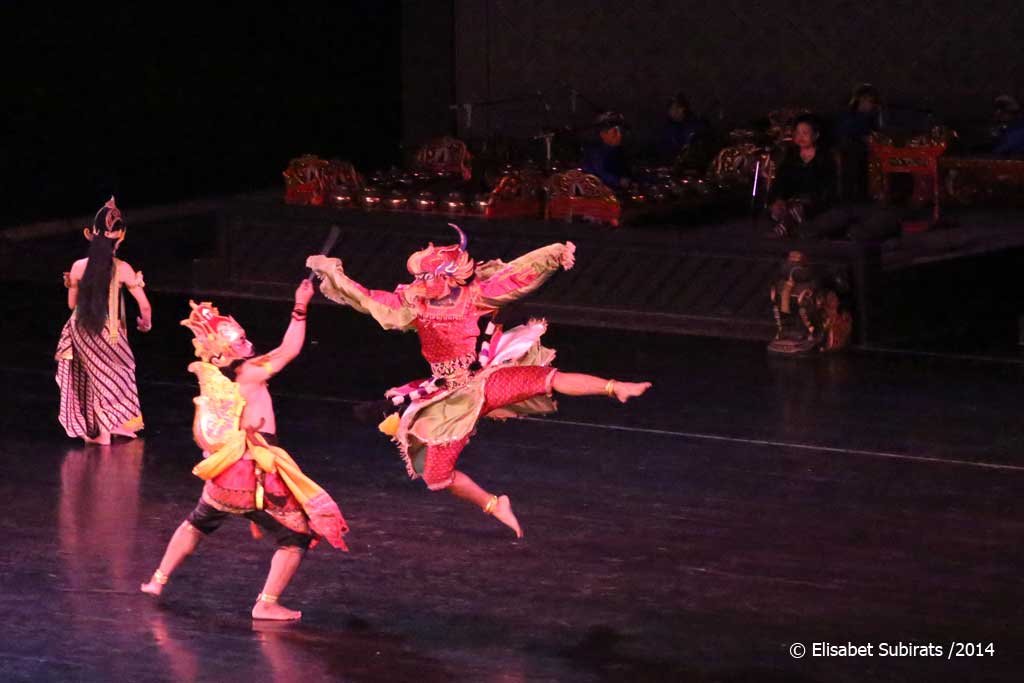 Two days later I woke up at 3 am to see the sunrise from Borobudur Temple, it was nice! After breakfast I spent the morning visiting this wonder, started by Hindus and finished when Buddhism was the main religion in the region, in the IX th century. Like any monument – stupa Borobudur is a guide to reach the unconditioned, the nirvana. It is organized around a central axis representing the centre of universe and its architecture has a tripartite division which reflects the three domains of existence for Buddhism: the base represents the world of desire, the intermediate section represents the world of shapes and the upper part represents the sacred domain where men abandon their material concerns. It is only when pilgrims arrive to this level that they can admire the main stupa fully and other 72 little stupas that cannot be seen from the lower levels. This is the metaphysical level, without shape. 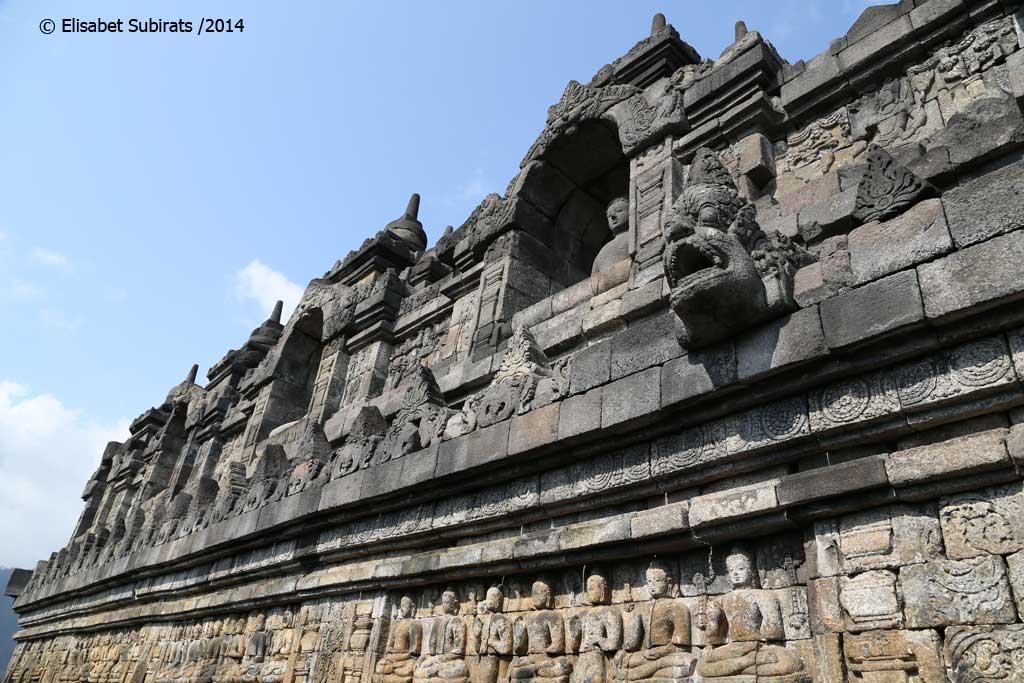 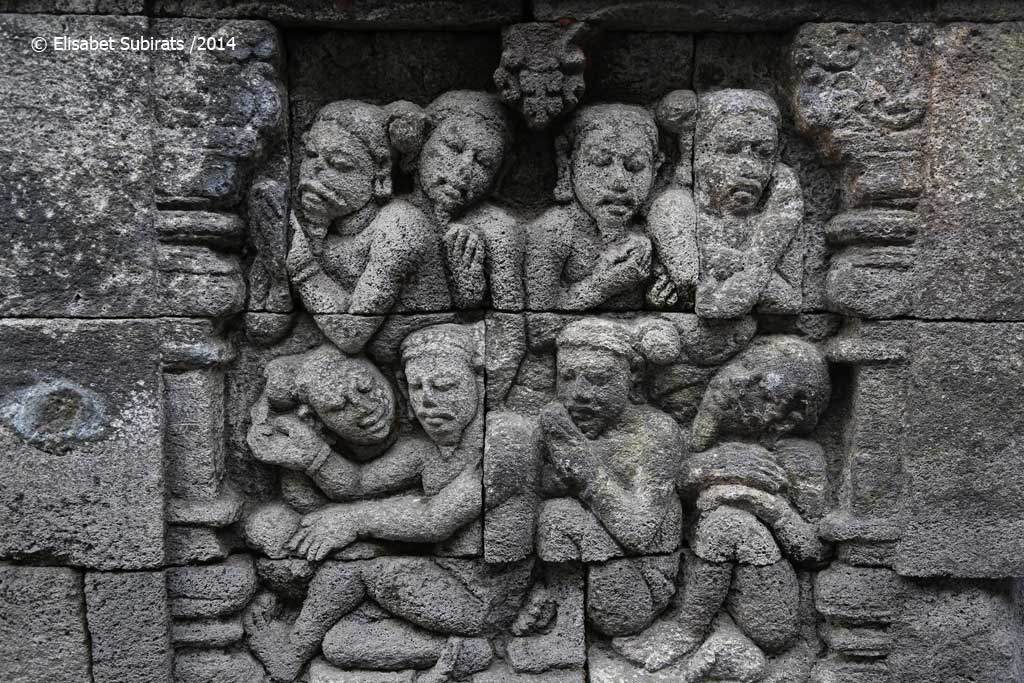 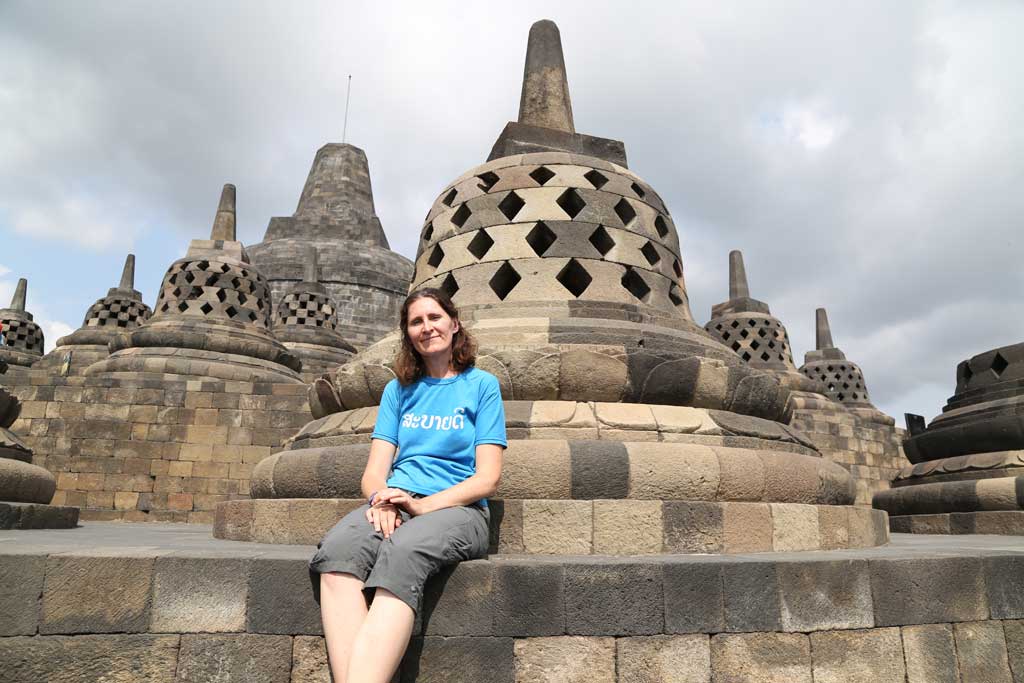 Borbudur is the perfect representation of cosmos and the ascension looking for the enlightenment and that’s why Buddhists from all around the world come to Borubudur to pray.

Between temple and temple I found the perfect place for a coffee which also had some great local food : Via Via is a new concept of guest house – restaurant – tour office which also proposes yoga and other courses. Every day the staff prepares 3 different typical dishes, all made with fresh food. From the moment that I “discovered” this place, my breakfasts always consisted in Javanese coffee and chocolate cake and I tried to taste as many local dishes as I could for lunch and dinner. They also had great desserts so who could resist the temptation? Not me!  I will write a full post dedicated to Indonesian food later, which I love! 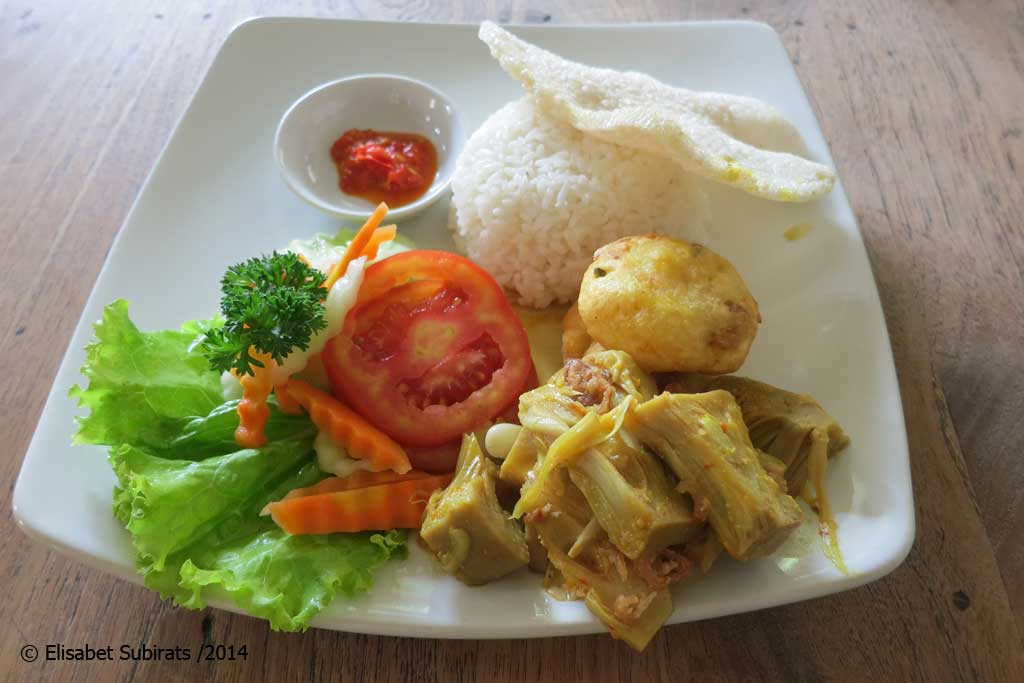 Permanent link to this article: http://holaworld.fr/jakarta-and-temples-of-yogyakarta/