The Camelot of Africa

On the following day, I visited the second group of churches. This complex includes Biet Abba Libanos, Biet Emmanuel, Biet Mercurios, Biet Lehem and Biet Gabriel Raphael, all linked through a variety of inner passages and tunnels. It is very different from the first group, let’s say more chaotic in its organisation, and some buildings don’t look like churches and don’t display the East-West orientation. That’s why many scholars believe that these buildings did not have a religious use but a civil use. Other scholars believe that this complex could represent the Heavenly Jerusalem –with Hell, Purgatory and Heaven- while the first group represents the Earthly one.
I think that locals believe this second theory because the guide made me cross a very long, completely dark underground passage that linked Biet Emmanuel with Biet Lehem bent down, all lined up like a train and with our torches off saying that it was the way from Hell to Purgatory. It was funny. He also showed me the “Roof of Heaven” but I did not want to climb there 🙂
From this group I found very interesting Biet Abba Libanos, which is partly hypogeal –three sides are still connected to the rock- and the twin churches of Biet Gabriel and Raphael, which nowadays are approached by a modern bridge. 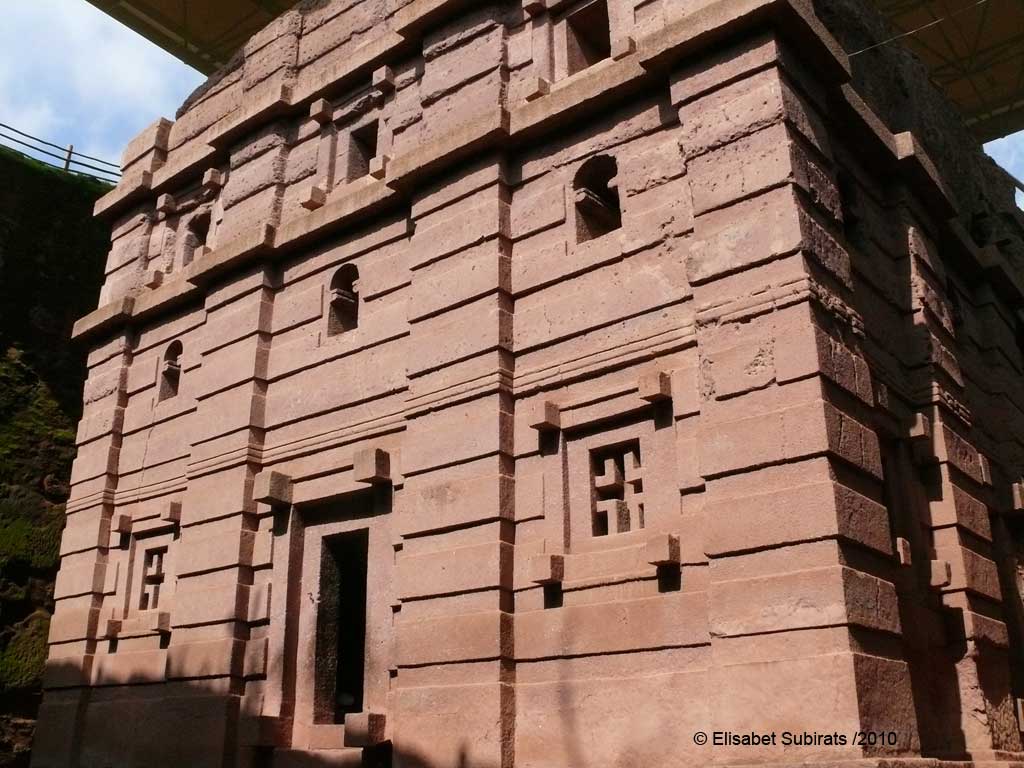 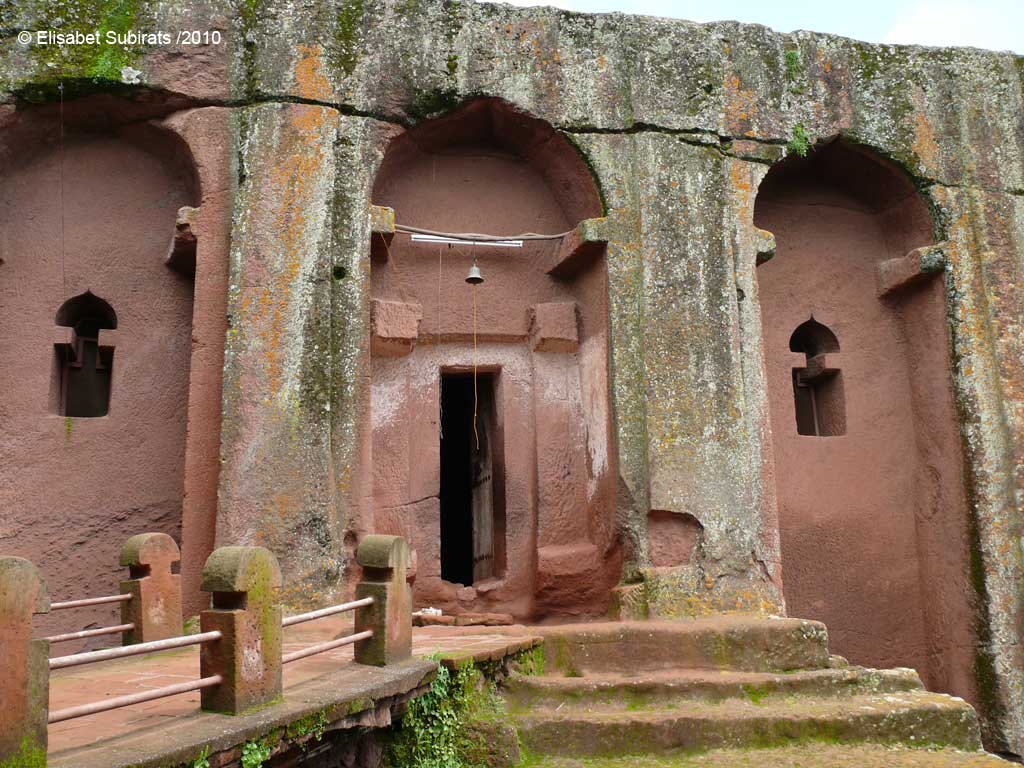 But the most spectacular church is kept apart from these two groups : Beta Giyorgis Church.

It seems that when King Lalibela finished the two groups of churches, he had an unexpected visit: Saint George, Ethiopia’s saint patron, was sad because any church was dedicated to him. The king was so sorry to have offended Saint George that he promised the saint to build the most beautiful church only for him. And voilà, that’s how this church was born!

This church has a Greek cross plan, with twelve sides. On the flat roof – fully visible from the edge of the huge trench –a triple cross is carved which is both a decoration and a water drainage system which ends with protruding gutters. Facades are simple in decoration with horizontal lines carved all around the church. On the ground floor doors and windows have the typical Aksumite protruding beam heads while the windows of the third order are pointed and decorated with acanthus leaves. 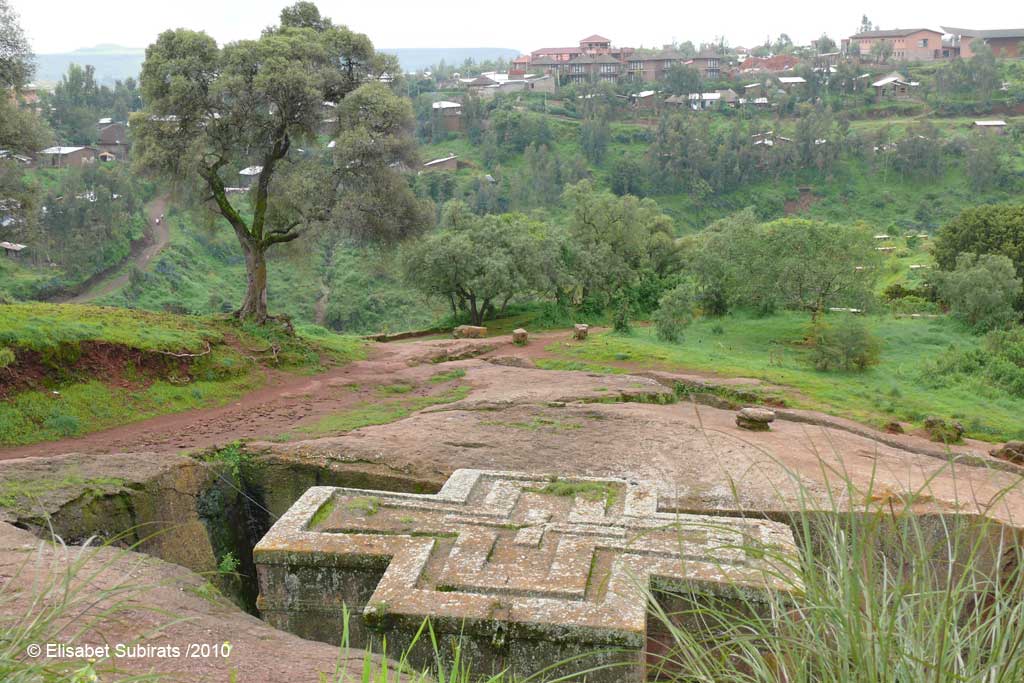 Local tradition believes that this church is the symbol of Noah’s Ark, which would explain the fact that in the first level all the windows are “blind” to avoid water come in. The guide appointed me a rocky mass outside, on the South East corner of this church, as Mount Ararat. 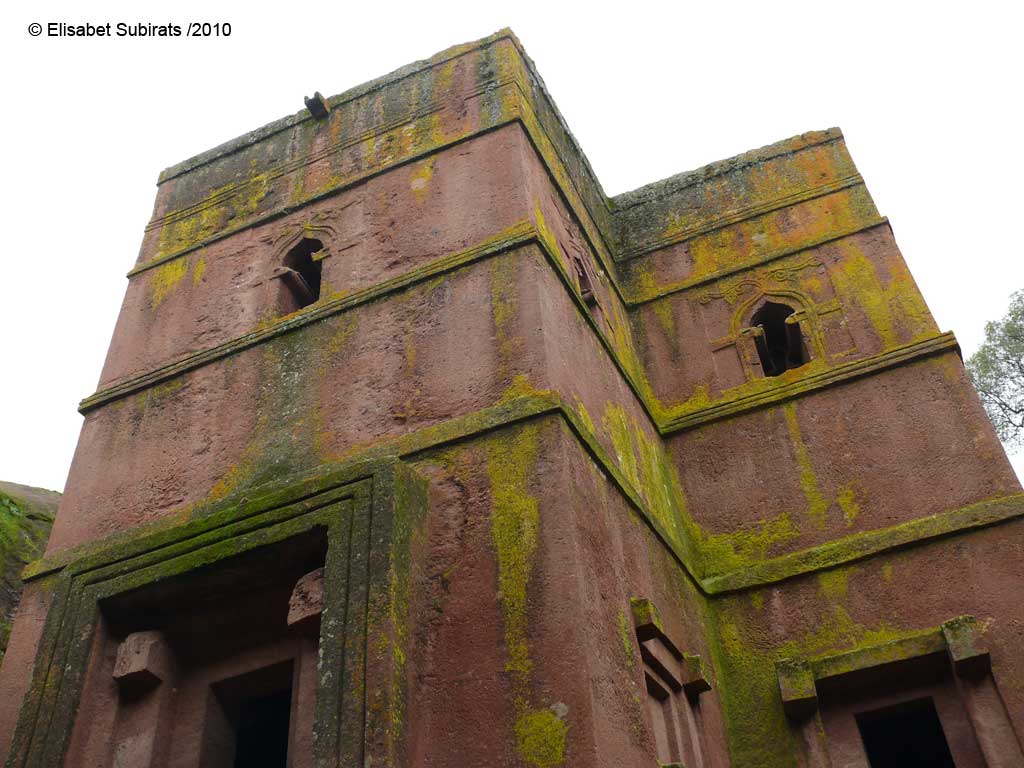 Beta Giyorgis is a good example to explain how these churches were built. Construction techniques implied removing the rock only, with no insertions or additions. The perimeter of churches was first designed on the rock by picks. This stage included the planning of the width of both the churches and the trenches, its heights, orientation, access points and drainage. Then they were excavated from top to down to the base. Once the block for the church was isolated from the rock bank, its inner mass was emptied out to create pillars and other features inside while at the same time the exterior was sculpted. This kind of rock is easy to work as it is either a red tuff or a kind of grey sandstone. Skilled men were needed and the main tool was double face cutting instrument: an axe on one side, a hoe on the other side. They also used chisels for the most difficult and narrow places.

These churches are very impressive in its execution and an important centre of pilgrimage for Coptic Christians since the XIIth century.The King of Lalibela set out to build a symbol of the holy land, when pilgrimages to it were rendered impossible by the historical situation. In the Church of Biet Golgotha, are replicas of the tomb of Christ, and of Adam, and the crib of the Nativity. The holy city of Lalibela became a substitute for the holy places of Jerusalem and Bethlehem, and as such has had considerable influence on Ethiopian Christianity. I have seen few unique sites like Lalibela. It is difficult (better say arduous) to reach by road but once you are there you are more than rewarded !

Permanent link to this article: http://holaworld.fr/lalibela-second-group-of-churches-and-beta-giyorgis-church/