The Moais of Easter Island

After two flights and more than a 24 hours trip, I finally landed at Mataveri Airport, the most remote airport in the world (2603km from the nearest other airport) and the only gateway to Easter Island. At the arrivals the owners of the hotel booked were waiting for me with a welcoming flower necklace: yes, I was in Polynesia!

Easter Island was formed by three separate volcanic eruptions from the ocean floor, between 3 million and 750.000 years ago, giving the island its distinctive triangular shape. Rapa Nui is its current name, also used for its inhabitants (the Rapa Nuis) and the language. It forms part of Chilean Republic since 1888 although its inhabitants feel themselves closer to New Zealand’s Maoris (during our chats, my host mentioned many times “Aotearoa”, the Maori name for New Zealand).

During the first day (and after a long sleep), I discovered Hanga Roa by foot. This is the only city in the island, with 4000 inhabitants and only one main road with all the shops and restaurants. The beach is never far and the city has also a small harbor, with some fish restaurants and diving clubs. 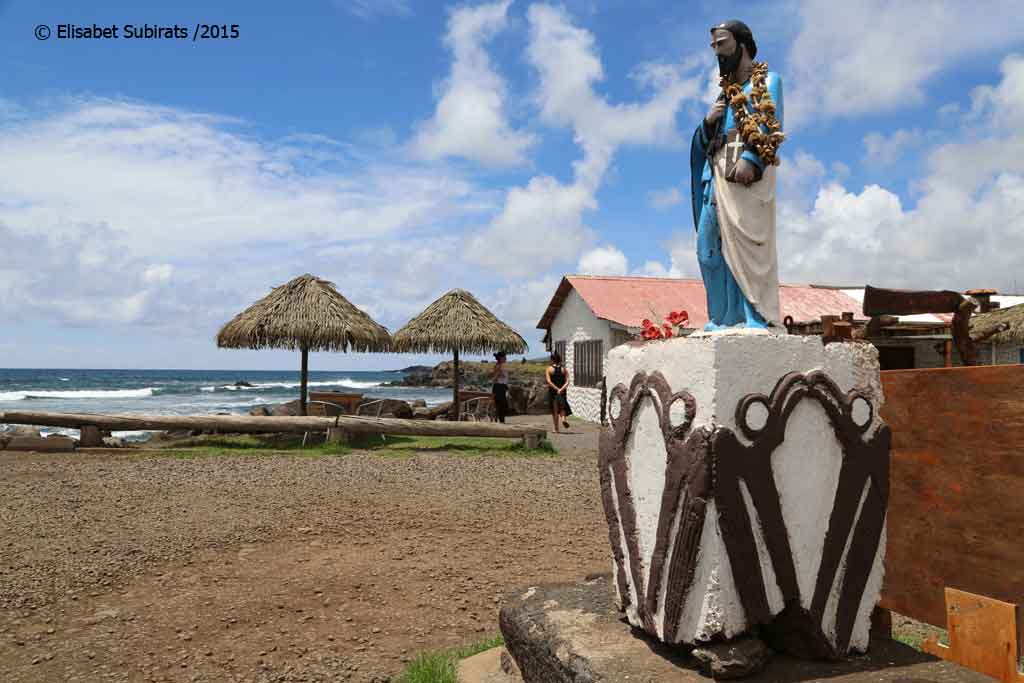 It was that same day when I saw the first moais, they are very impressive! On Easter Island from 1000 to 1600AD, when a chief or important member of a tribe died, a statue was erected in the village in such a way as to overlook the village and their descendants. That’s why the moais always face inwards, not out to sea. 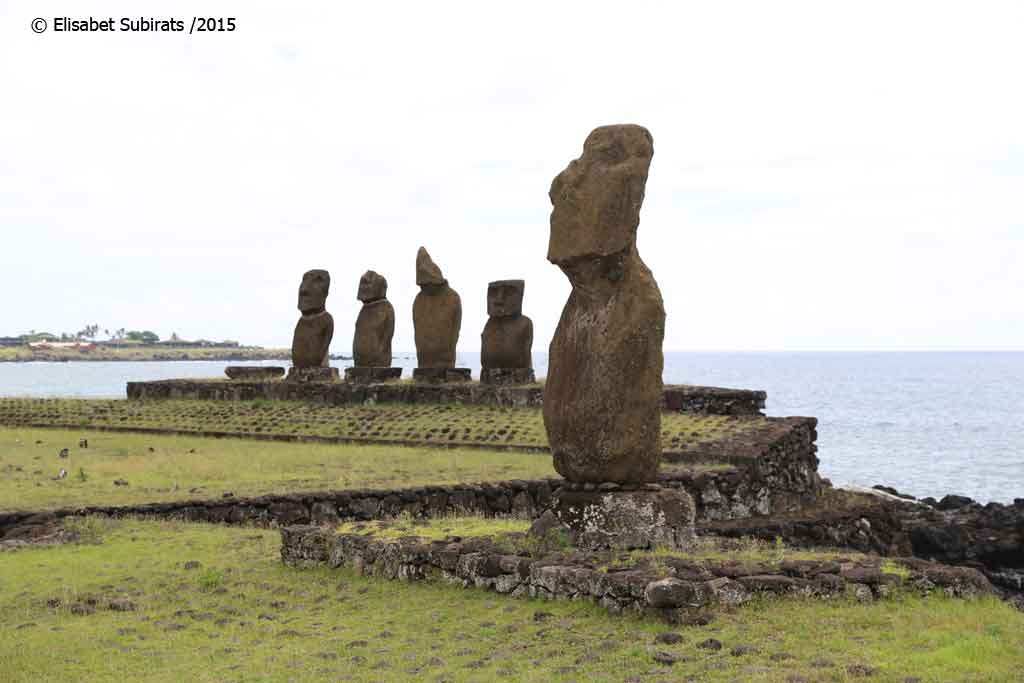 On the second day I felt fit enough to hike up to Ranu Kau, Rapa Nui’s largest volcanic crater and the island most impressive natural wonder. This crater offers protection to plants from the strong winds and animals that have ravaged other parts of the island and gives the interior a kind of micro-climate. Actually some species were saved from extinction thanks to this crater. 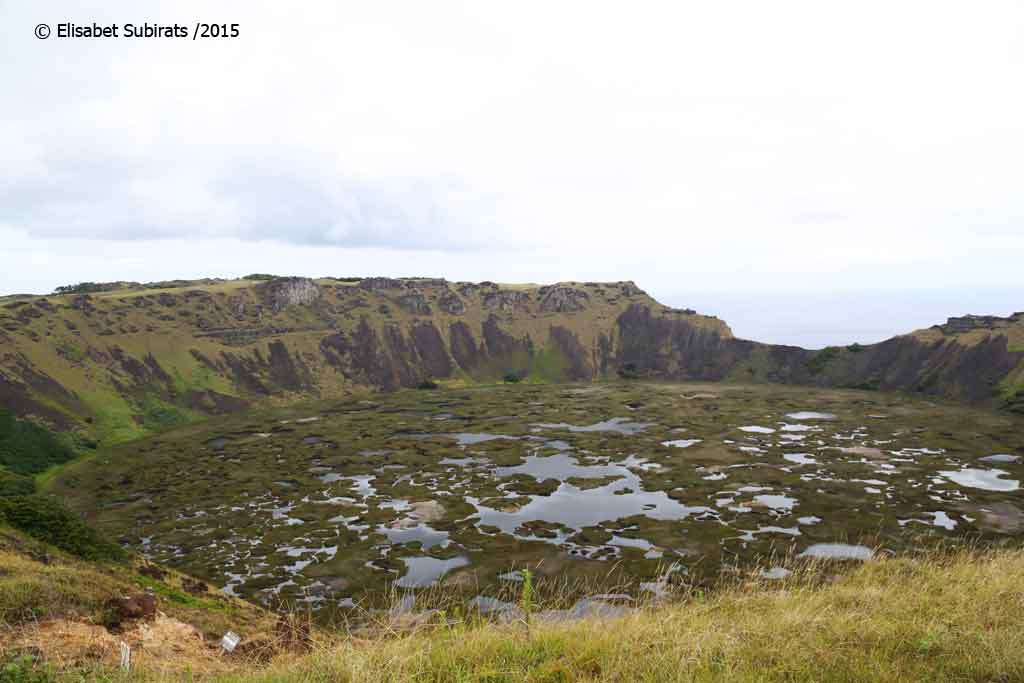 This is a beautiful sight, even with bad light like that day. The hike to the crater (45min, one way) was in the past  the ceremonial route taken by Rapa Nuis to reach the sacred village  of Orongo, where the bird man competition took place. 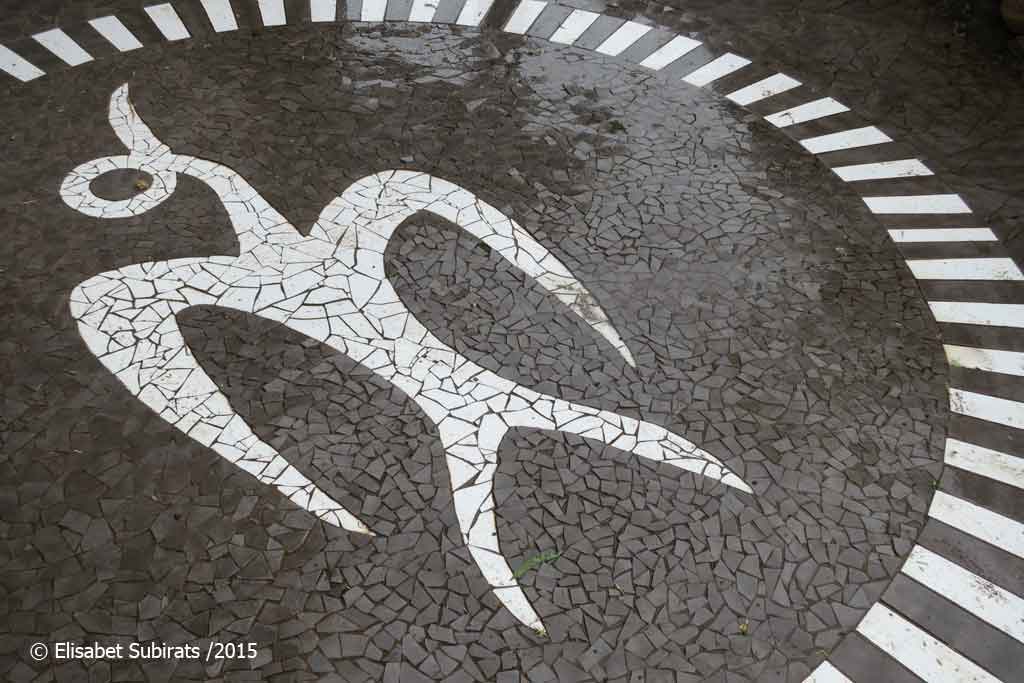 After 1600 AD, the Rapa Nui king lost the power in the island and (most probably) the lack of natural resources lead to a civil war. Little by little all the moais were thrown from their platforms and the system of government in the island changed. The bird man competition took place every year and was a competition between all the tribes to determine which village would rule the island (with a preferential access to the resources) for one full year. Every tribe chief chose “his man” for this competition, that started when the first birds (sterne fuligineuse) arrived at Motu Nui little island. All the competitors climbed down the crater to the sea and from there they had to swim to Motu Nui, 2km far from Rapa Nui (!) and there they waited until the bird layed its first egg. The competitor that managed to take the egg made a sign to his tribe to warn his chief and had to swim back without breaking the egg. The winner became the bird man, a hero with right to marry the most beautiful girl of the island, and his chief ruled the island for one year. 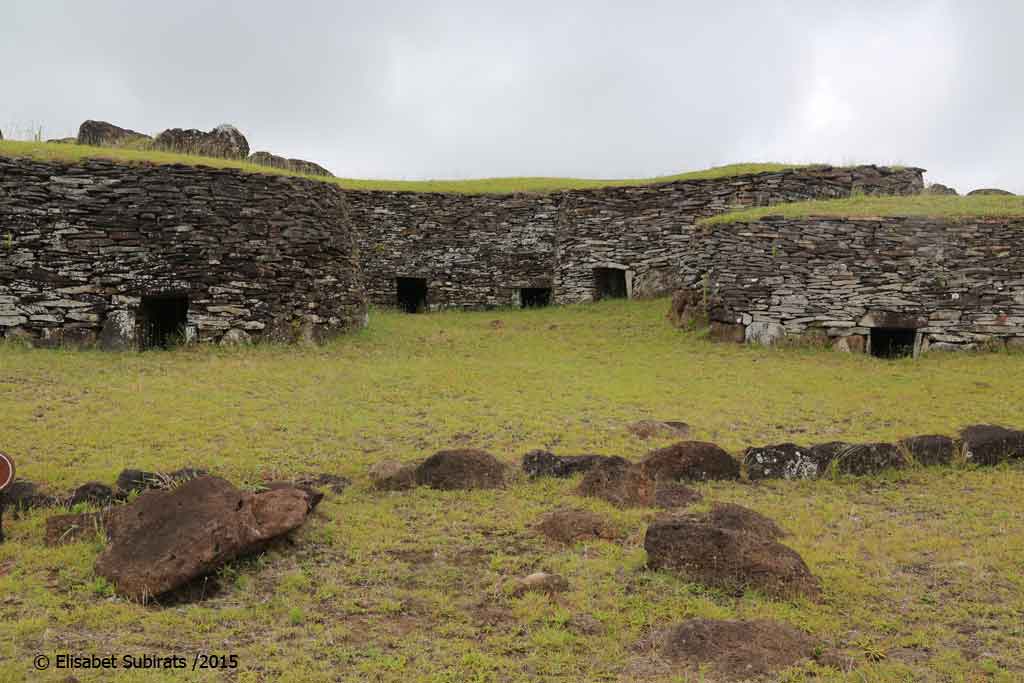 This is the sacred village of Orongo, only inhabited during the bird man competition and with some interesting petroglyfs (rock carvings).

I got stressed when somebody told me there are 35.000 archaeological remains in Easter Island, my 4 days trip did not look enough to me! For the last two days I rented a car (30.000 to 40.000 pesos a day while tours are very expensive) that I shared from time to time with some hostel mates. For the historical background I had bought  “A companion to Easter Island”, a super guidebook with all the information about the island and moais that I needed. Driving around the island is super easy (30 to 60km/h and few cars) but one must be careful with the 3000 wild (and unpredictable) horses around the island, especially because the cars are never insured: if there is any damage, all the expenses go to your pocket!

Two sites not to miss were Anakena and Tongariki, for its beautiful location by the sea. In Tongariki we met my favourite moai, the “Traveler Moai”! This moai was used by Thor Heyerdahl to test his “moais transportation” theory and later the Chilean Government sent it to Japan in appreciation to their help restoring Tongariki site, destroyed by the 1960 tsunami. 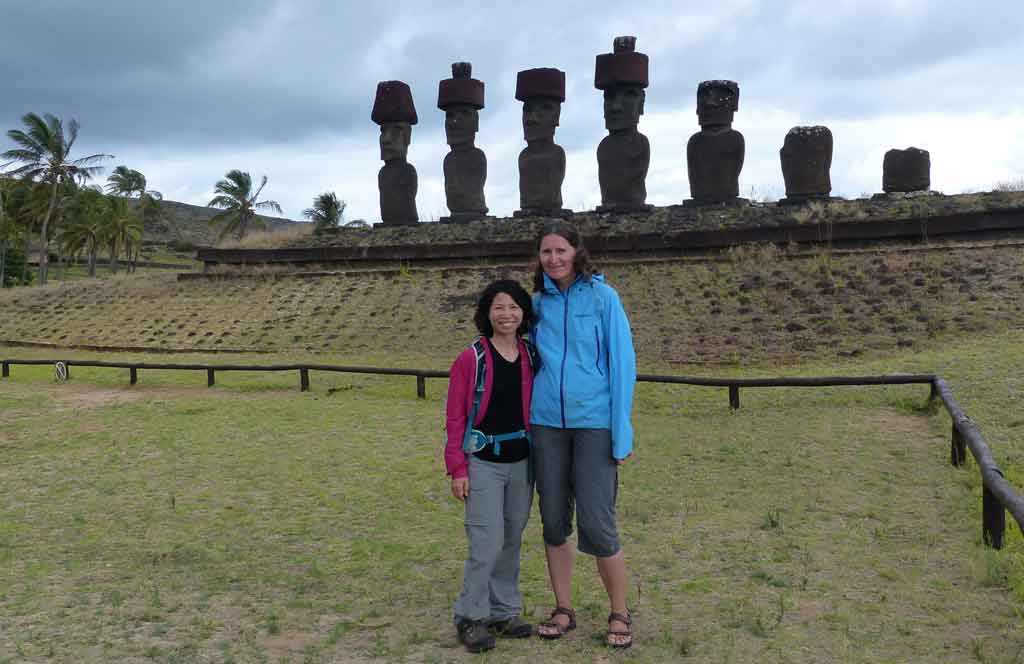 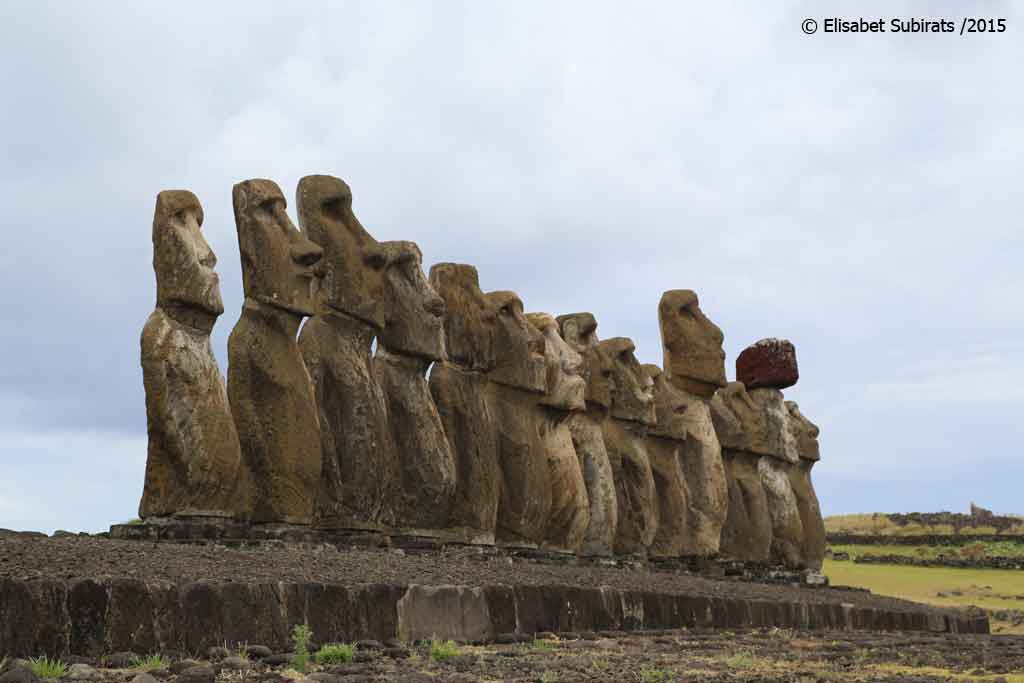 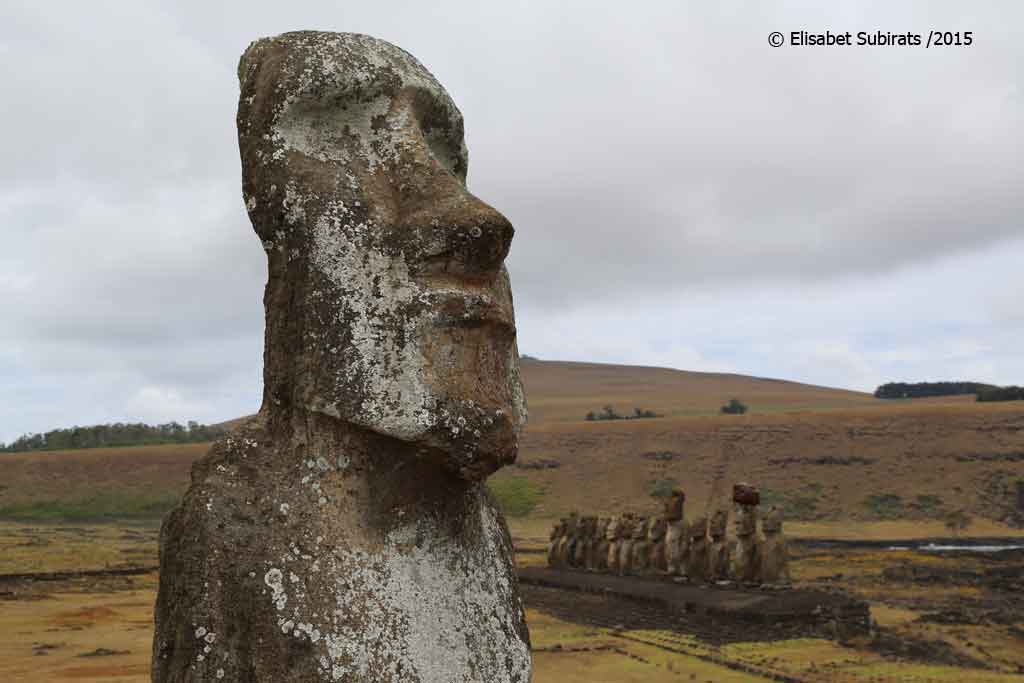 Say hi! to my favourite moai, the traveller moai!

However my favourite site was Rano Raraku, the quarry where nearly all the moais were carved and where almost 400 unfinished moais still lie in various stages of carving. 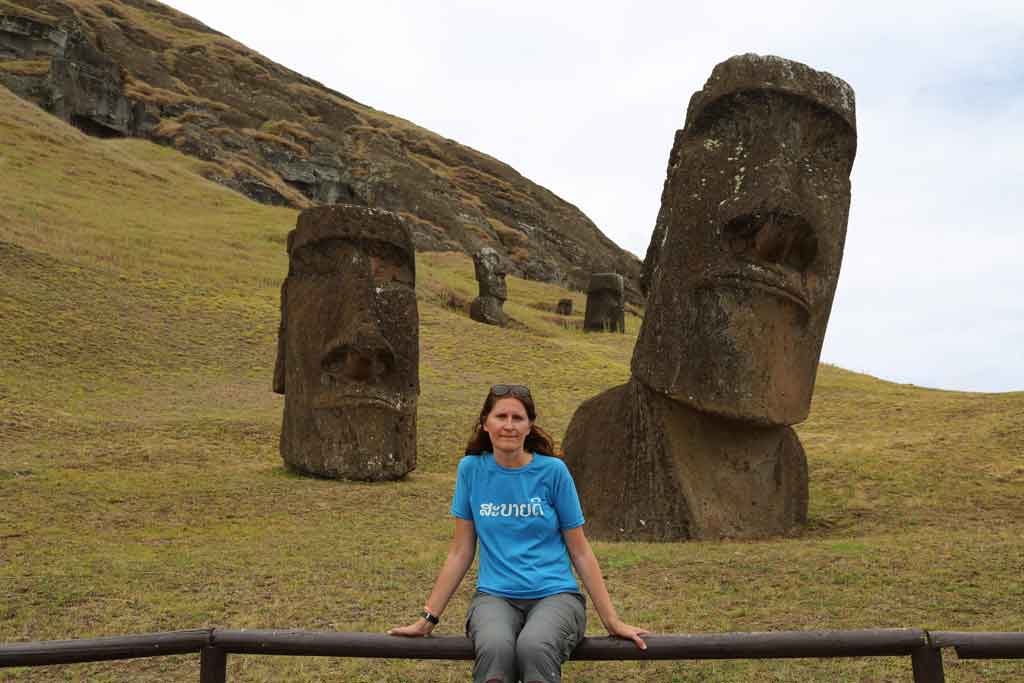 A large moai took up to 2 years to be carved by a team of workers, under the guidance of a master carver. When the carving was finished the moai was ready to begin its journey across the island, along one of the 5 “moai roads” to its final destination. Only once the moai had been erected onto its platform the topknot (comping from Puna Pau quarry) was added, the eye sockets were finally carved and the eyes opened. In this way the ancestor’s mana (soul) was revived and his spirit brought back to life. 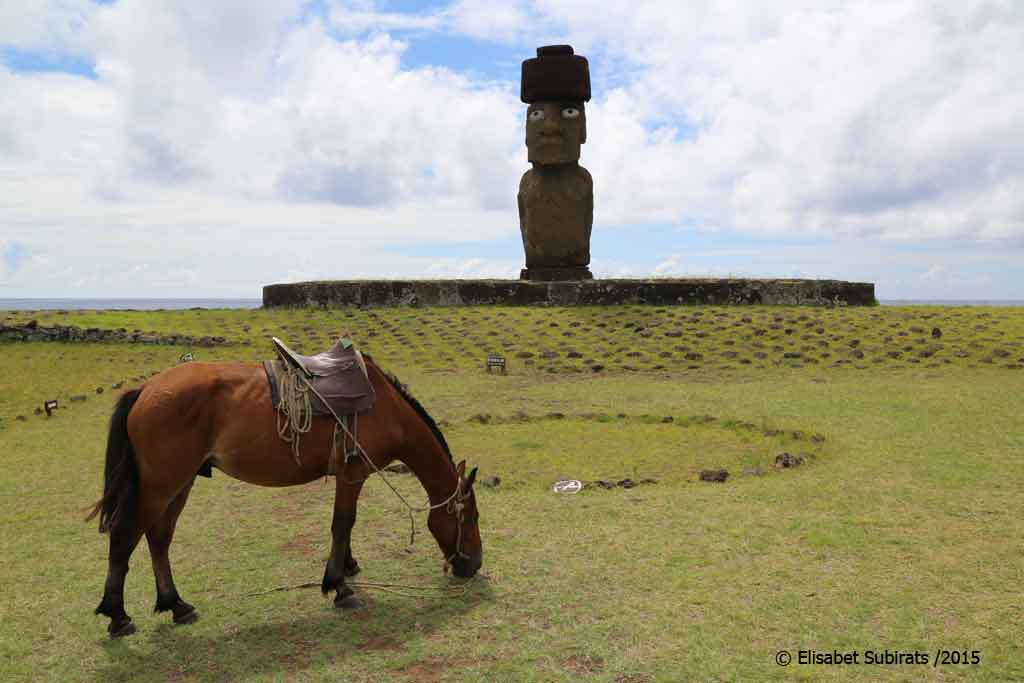 On the last days I climbed up to the island highest point in the island and one of the three original volcanoes, Maunga TereVaka (507m, 9km, 3hrs), to have a 360° view of Easter Island. I also visited the last major sites. 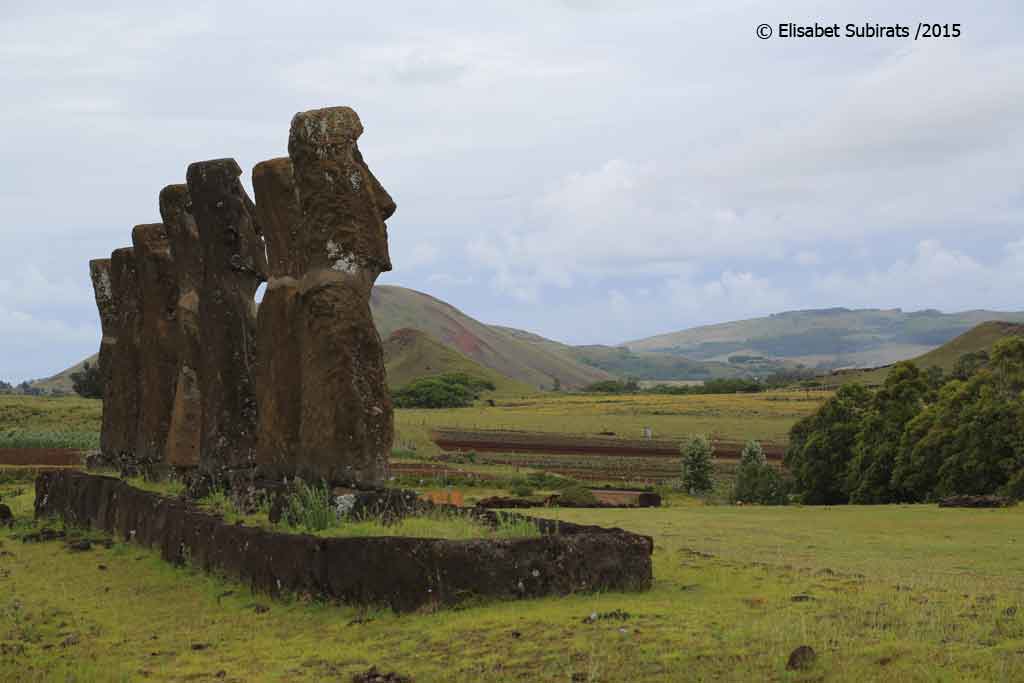 I found Easter Island much more interesting than I thought. This is a unique place in the Earth for its history and cultural heritage. I Know I am very lucky to have visited this tiny island lost in the middle of Pacific Ocean, only 200 people arrive and leave the island every day! After this polynesian parenthesis it was time to fly back to Santiago to start the second part of my Round the World trip: South America!

Permanent link to this article: http://holaworld.fr/the-moais-of-easter-island/