One hundred days on the road!

Lights up, this is Sydney!

One does not need a lot of imagination to guess why the central part of Australia is called “the Red Center”, the view from the plane of this huge desert area is just amazing! 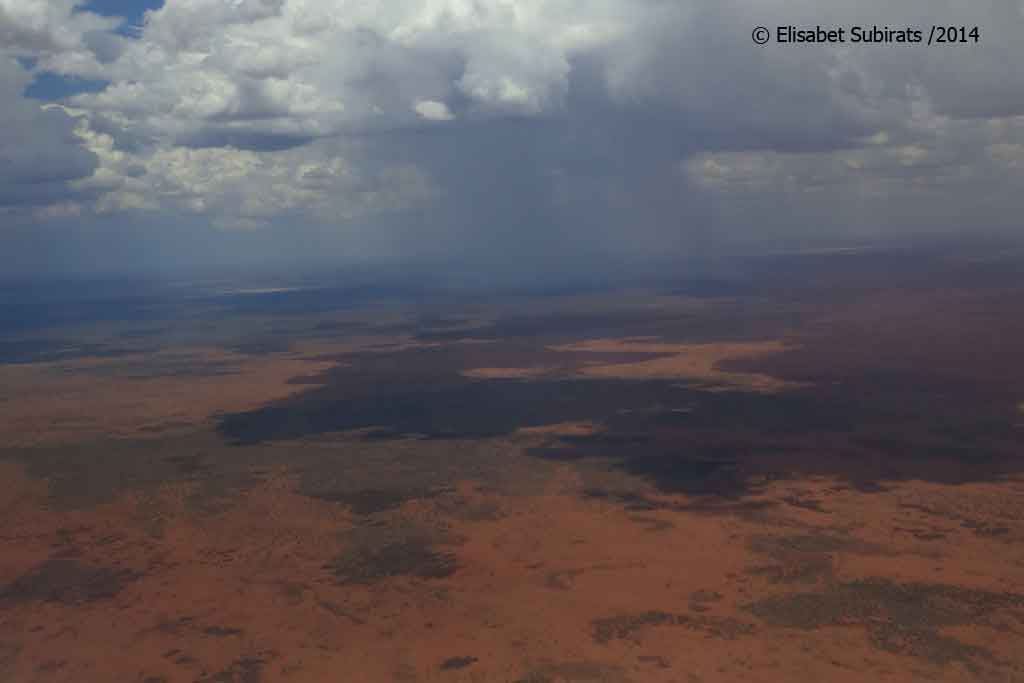 I spent my first two nights in the Northern Territory in Alice Springs, an outback town with a pioneer past. In Alice Springs there are some interesting things to see, I just visited the Royal Flying Doctor Service Base. The RFDS is an aeromedical organisation which provides since 1928 emergency and primary health care services for those living in rural and remote areas in Australia.

After this interesting museum I took a bicycle along the usually dryTodd River to the start of Larapinta Trail, passing by the old Telegraph Station. Built in the 1870s, it used to relay messages between Darwing, Adelaide and Great Britain and the first European settlement in the area was developped around it. The visit of the ensemble costs 9$ but I could see much of its architecture from the fence. It’s also here where I could spot my first (alive and jumping!) kangaroos, so cute! 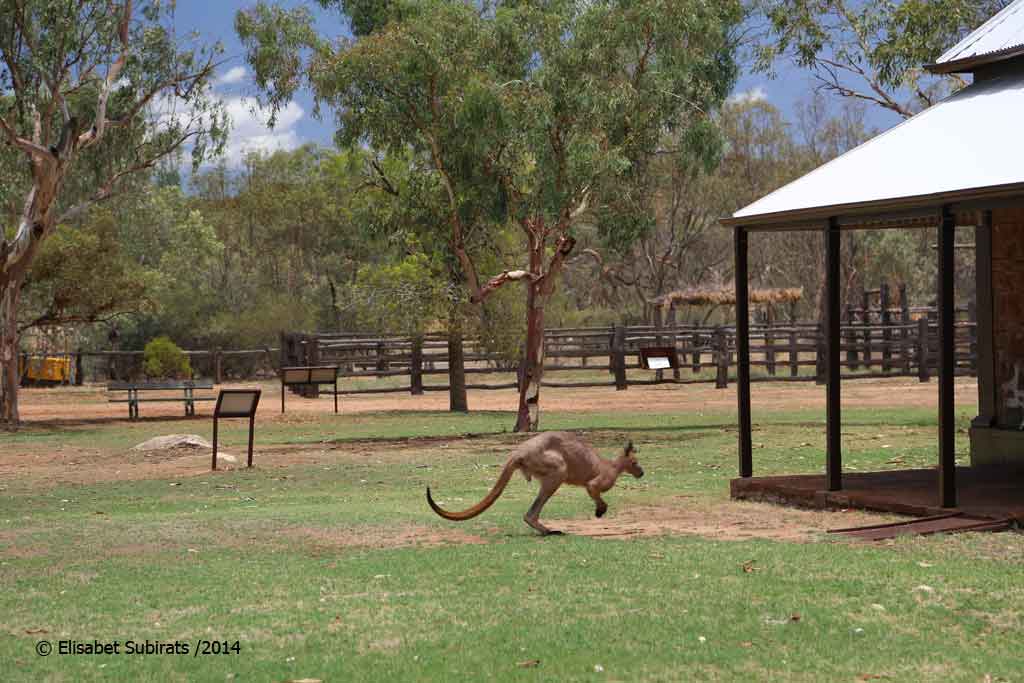 In Alice Springs I joined the Rock Tour to explore the Outback for three days. On the first day, the group left early in the morning to Kings Canyon for our first hike. Once there it was so hot (+42C) that the main walk, the Kings Canyon Rim Walk, was closed so we could only enjoy the Kings Creek Walk a short stroll along the rocky creek bed (2km return). It was a nice walk but too short for my taste, I was so sad! 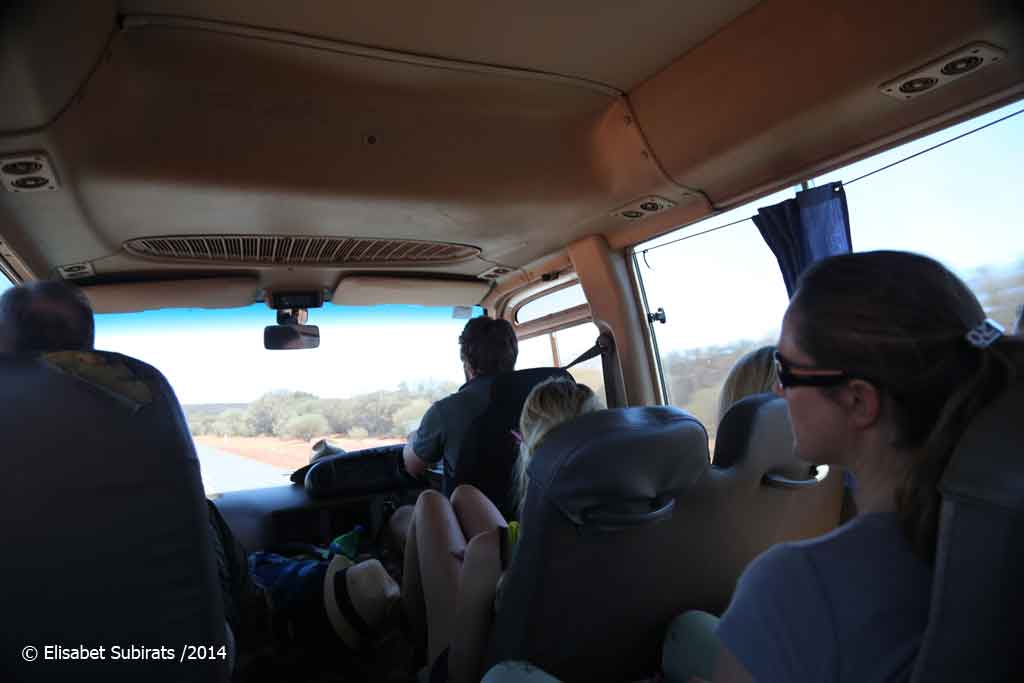 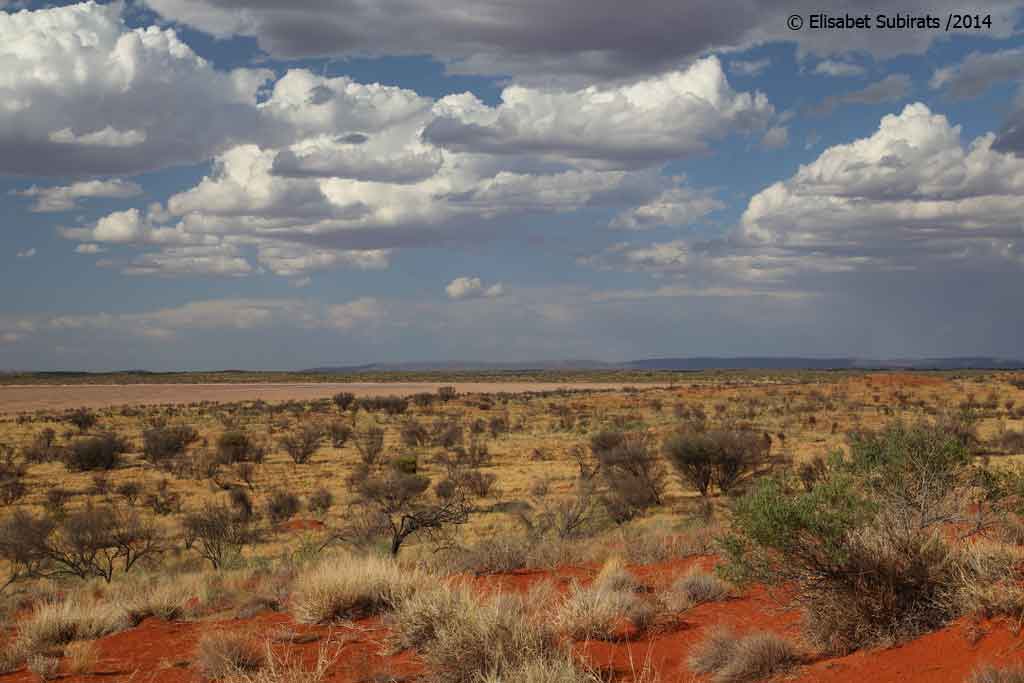 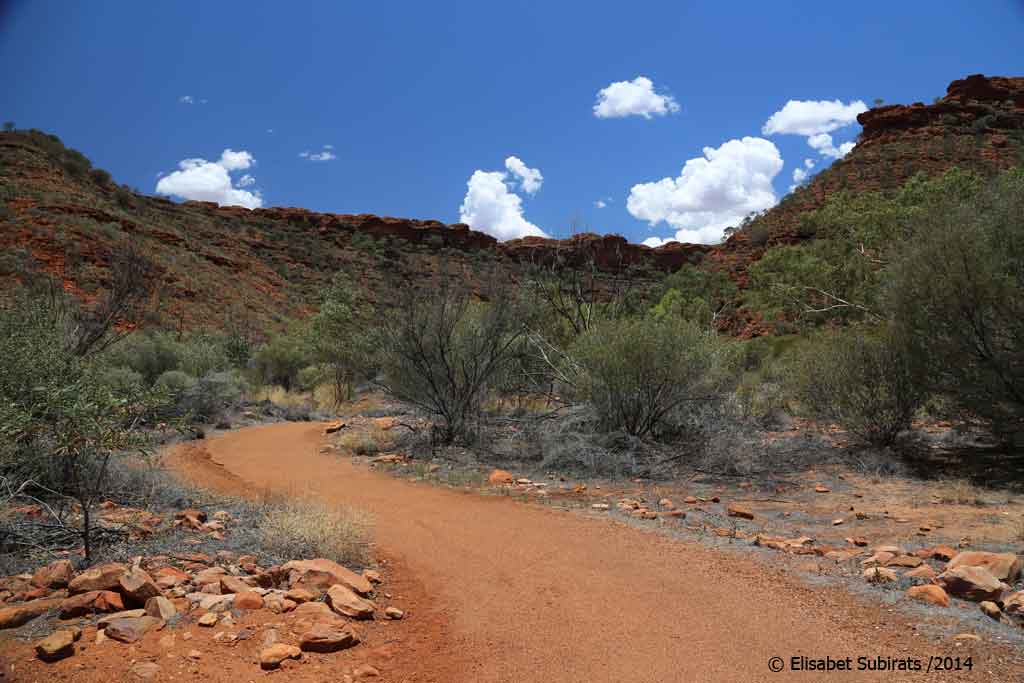 That evening at the base camp we had a big storm which spoiled a little bit our camp-oven dinner (we had to eat under a shelter) but at the end we could sleep around the fire in our cozy swags as planned. It was the beginning of the rainy season and I had a storm everyday since my arrival to the Northern Territory so I did not expect beautiful sunrises or sunsets on the coming days . . 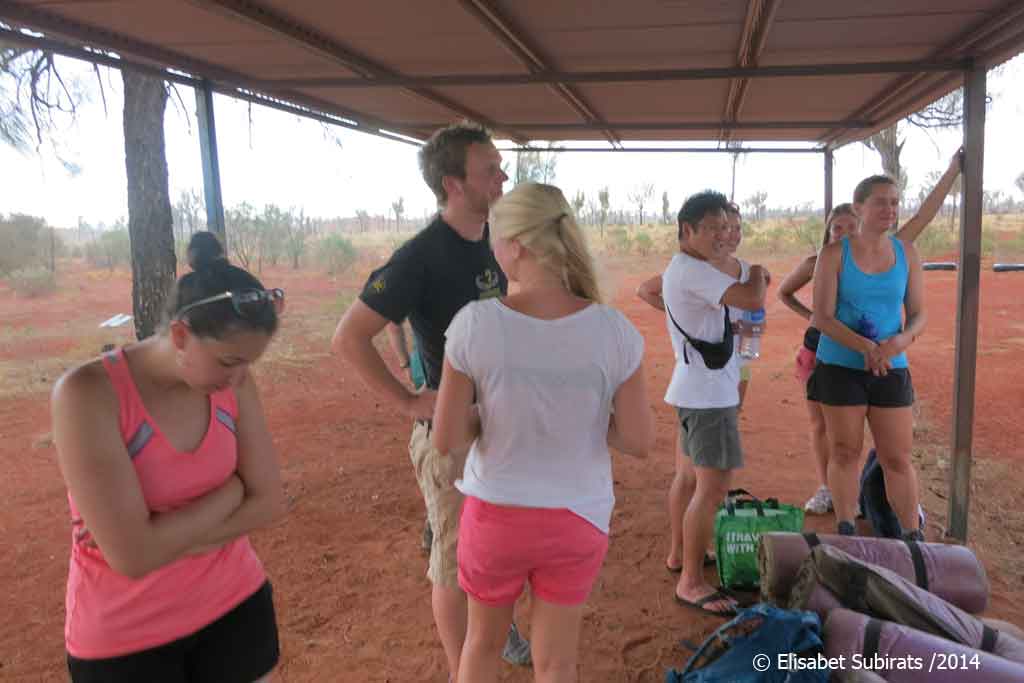 On the second day we arrived to Uluru – Kaja Tjuta National Park. This is one of the few properties in the world to be dual-listed by Unesco for its natural and cultural values. This Park is also an example of good management and cooperation between Anangus (the traditional owners) and white people.

First we went for a hike at Kaja Tjuta, a group of domed rocks which is an Anangu men’s site and it is sacred. We started walking early in the morning to avoid the heat and we went through the Valley of the Winds (7.4km, 4hr). This is not a difficult hike but the heat (always +36C) made it a little bit hard. However the views are breathtaking so it was worth the effort. 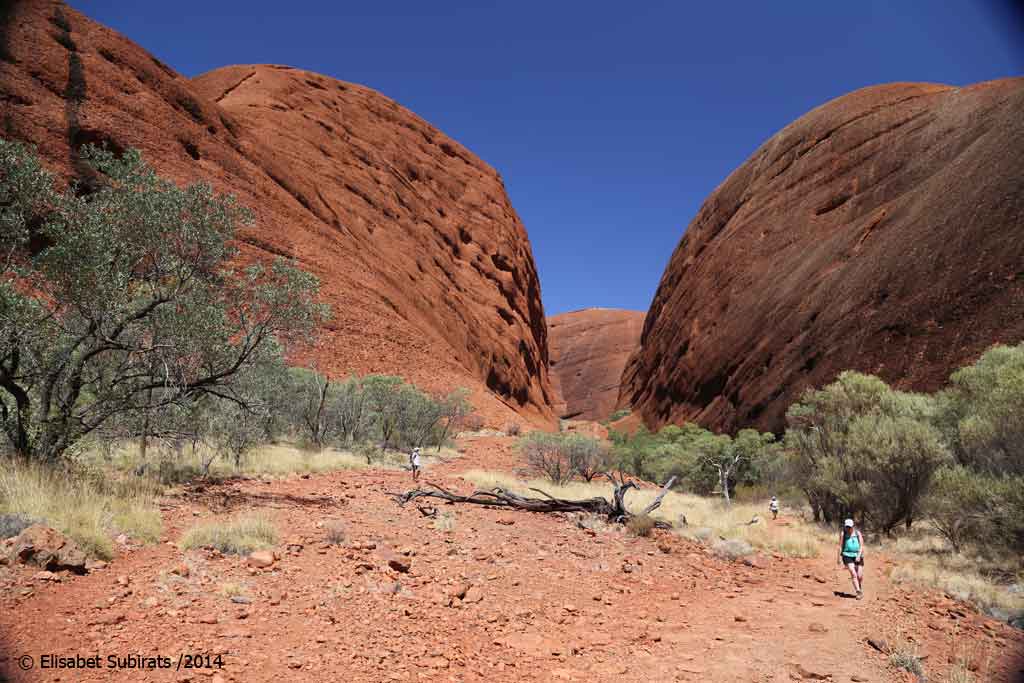 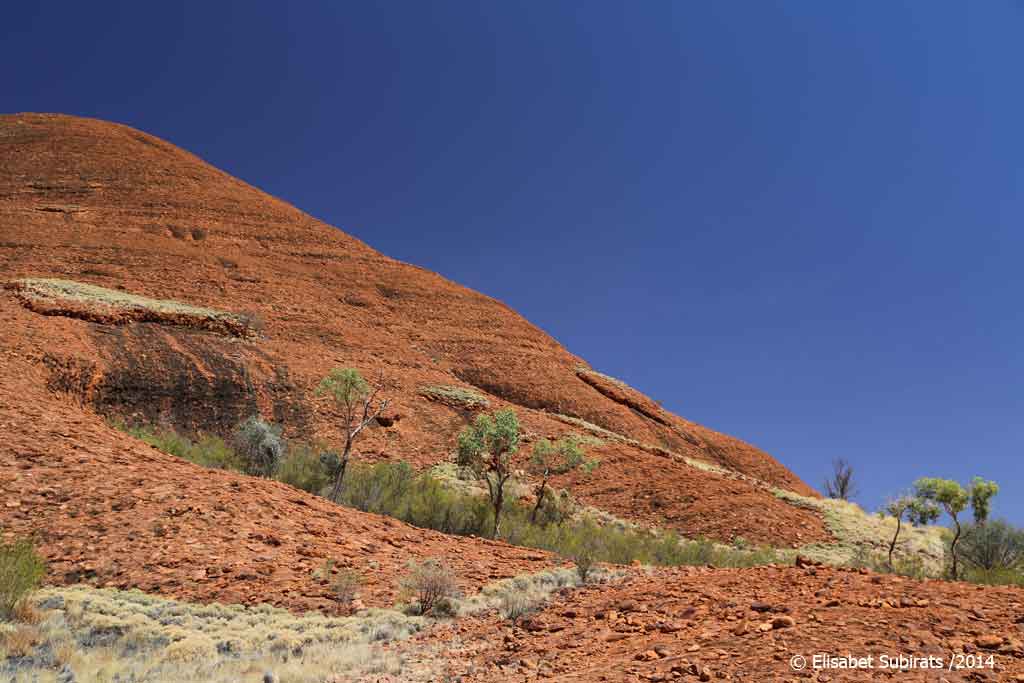 In the afternoon our guide took us to the Cultural Centre to learn more about Anangus, their culture, traditions and beliefs.  It was on the way to the Cultural Centre when we could see Uluru (the Rock) for the first time, it’s so imposing! Even if I had seen it thousands of times before on pictures or books, the view of the Rock “for real” impressed me a lot. 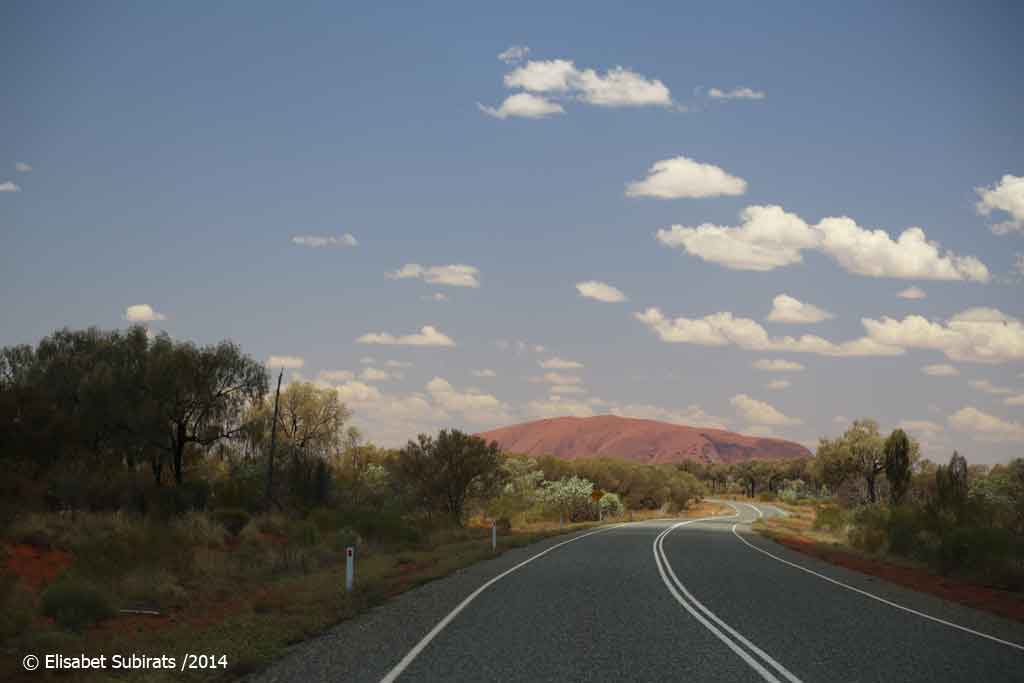 After an introductory short walk, the Mala Walk, we reached the spot for Uluru sunset by 6.30pm, too early in my opinion because after two hours of waiting at +30C with no shade and too many beers I could not see the Rock’s “awesome changing color”, for me it was brownish all the time, lol. 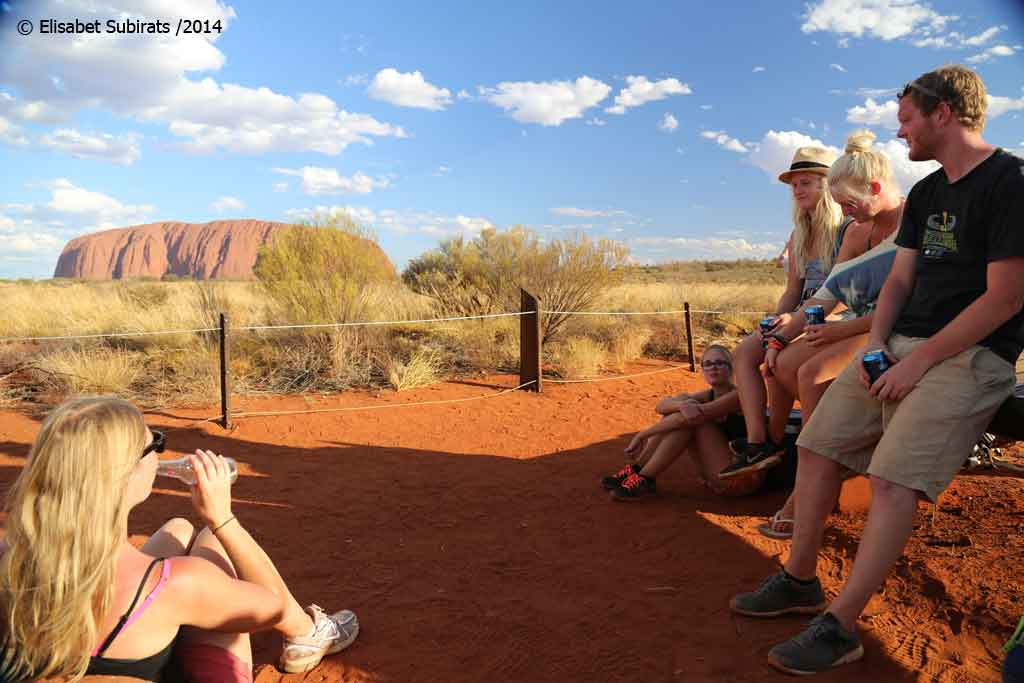 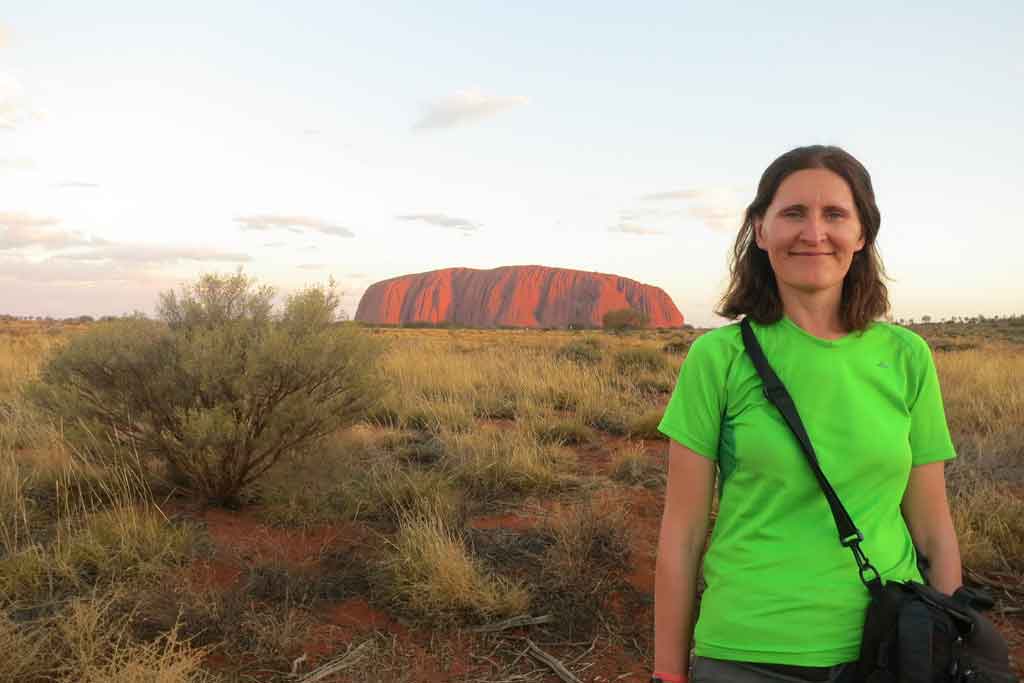 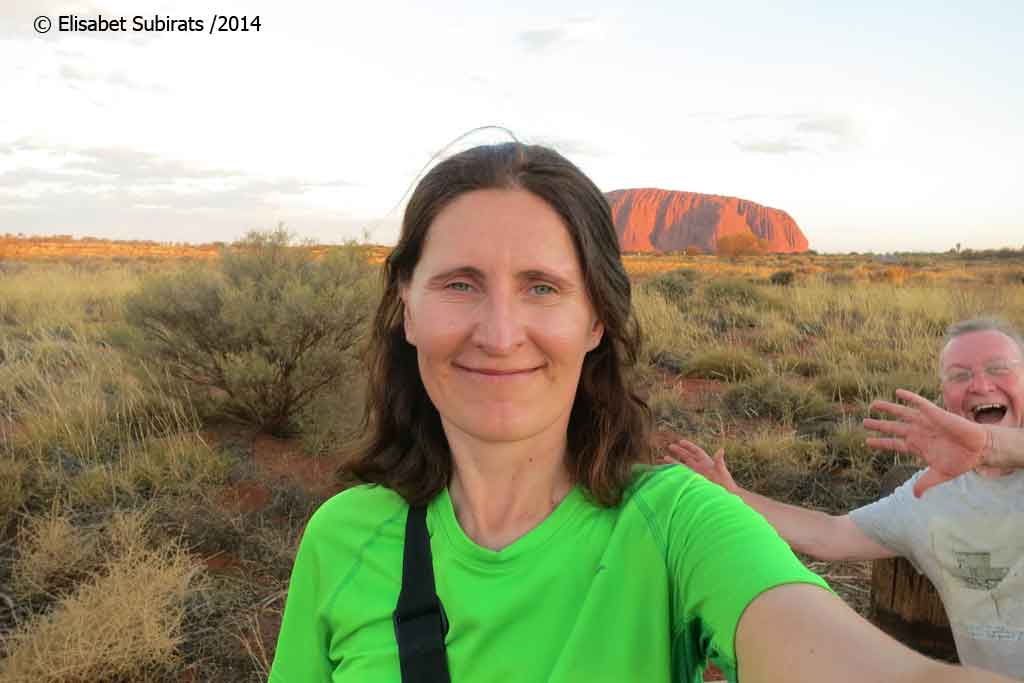 On the third day we woke up very early to see the Uluru sunrise from a good spot. We were very lucky because the sunrise was amazing, one of our guide’s best sunrises (he said) and I believe him! 😉 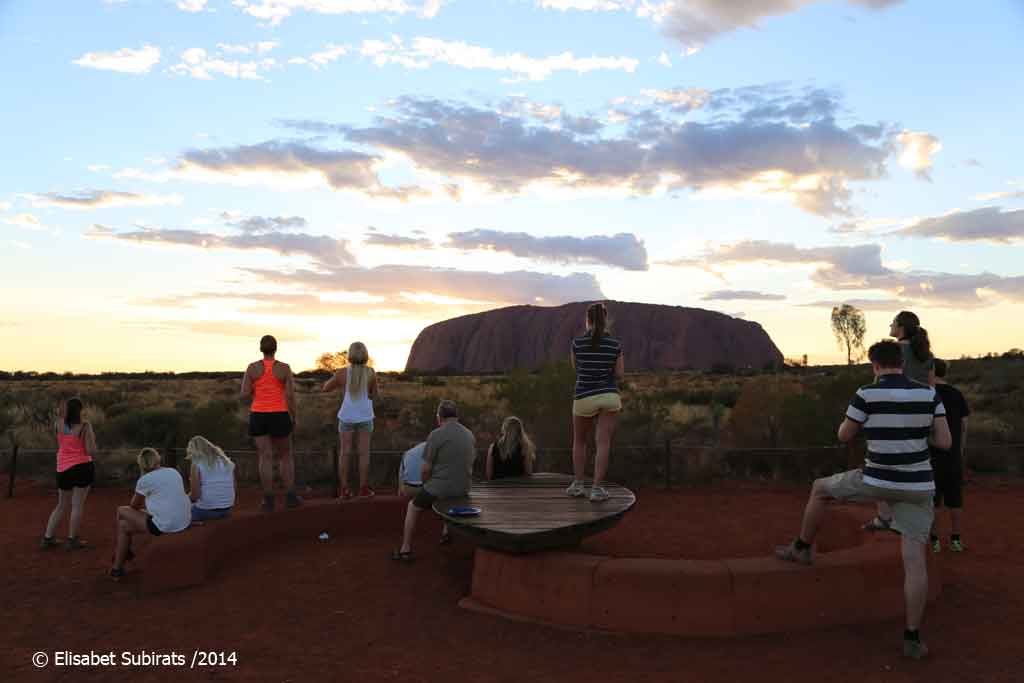 After a good breakfast we went back to Uluru for the Base Walk. This track circumnavigates the Rock and it is far from being a boring walk because we passed caves, paintings, acacia woodlands and rock holes and abrasions. The Rock is so huge that we needed 3 hours to complete the Base Walk! 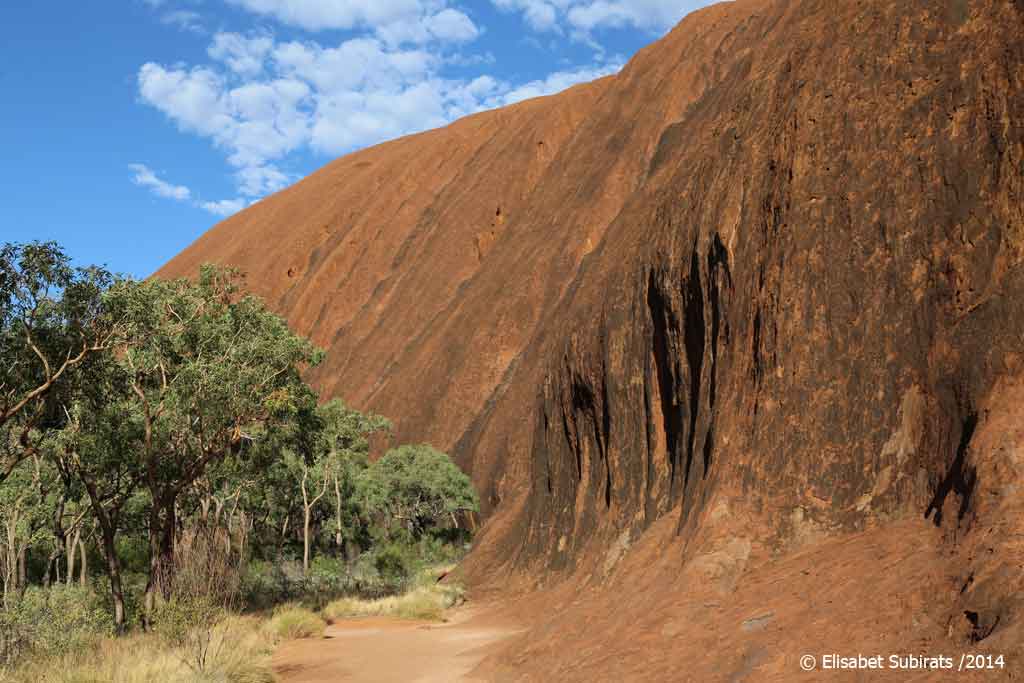 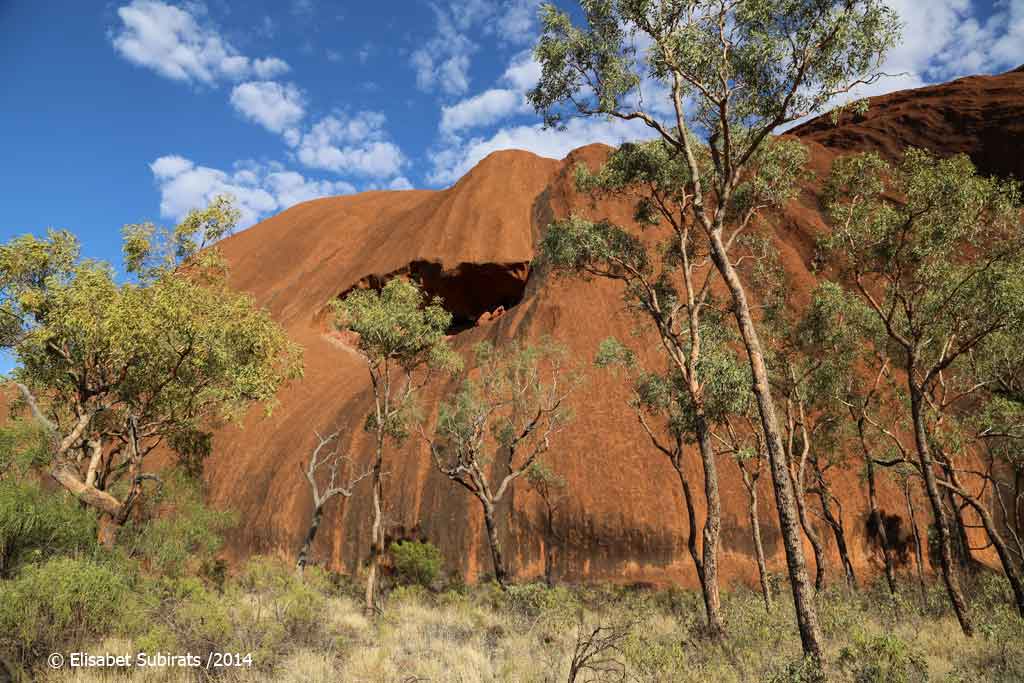 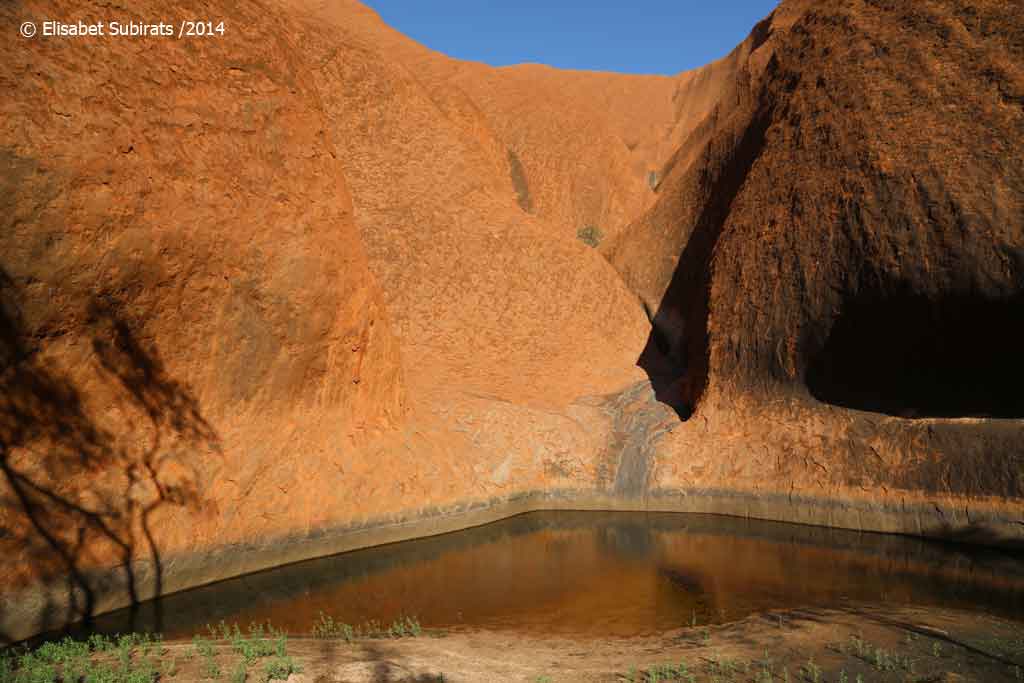 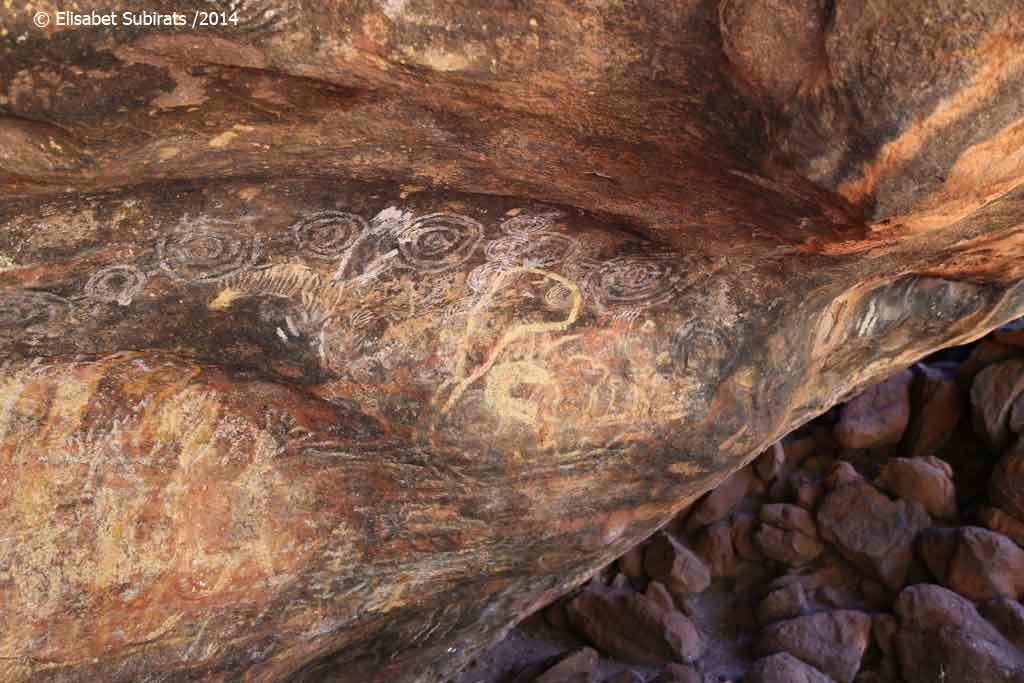 Permanent link to this article: http://holaworld.fr/the-rock-tour/