Yadz was another must on my Iranian wish list. This desert city is considered the oldest living city on Earth because it has been continuously inhabited for about 7.000 years. Yadz is also home to Iran’s largest population of Zoroastrians and its Ateshkadeh (fire temple) was the main reason of my visit to Yadz.

But Iran is a very huge country and Yadz is located at two day’s camel ride north of Kerman  so even if we exchanged the camel for a comfortable bus, we decided to cut the road trip in two and spend a night at the restored Caravanserai Zein-o-din, like travelers of  ancient times. Zein-o-din is a fantastic 400 years old caravanserai built on the orders of Shah Abbas I as part of a network of hostels to promote the trade along the Silk Road. Like in old times, the accommodation is spartan with raised rooms full of mattresses on top of carpets with just a curtain which separates people from the corridor. There are also few basic twin rooms around the central patio. The decoration is simple but everything is done with a great taste. Fortunately they have included fantastic external toilets that make life easier for women, lol. As the caravanserai is very isolated, one must eat here but I had no complaints because food was delicious. I spent a great time in Zein-o-din . . . 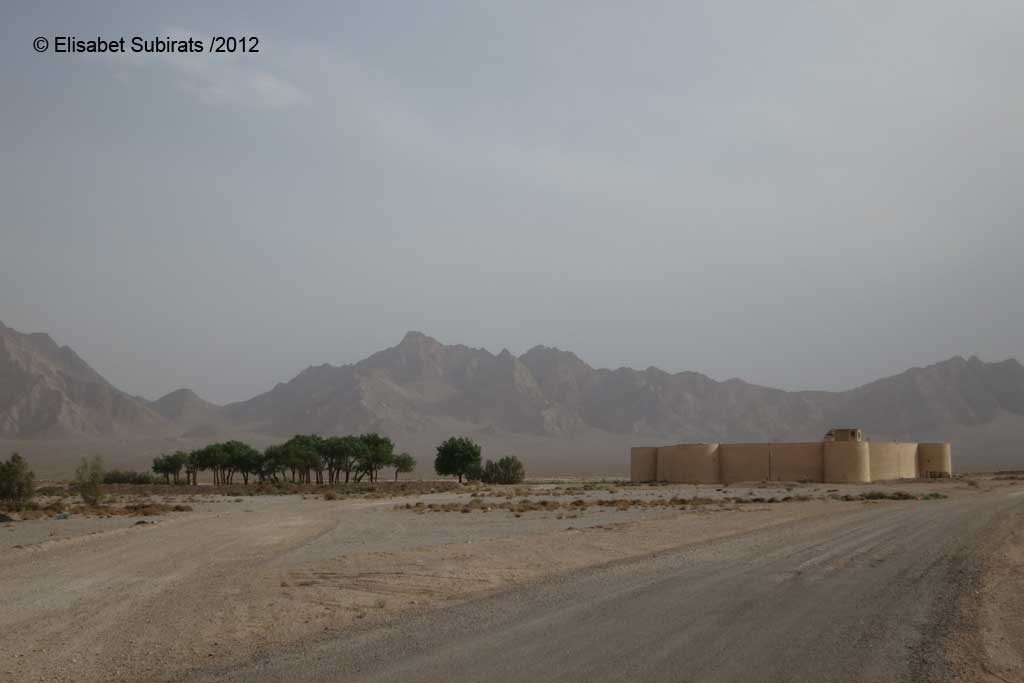 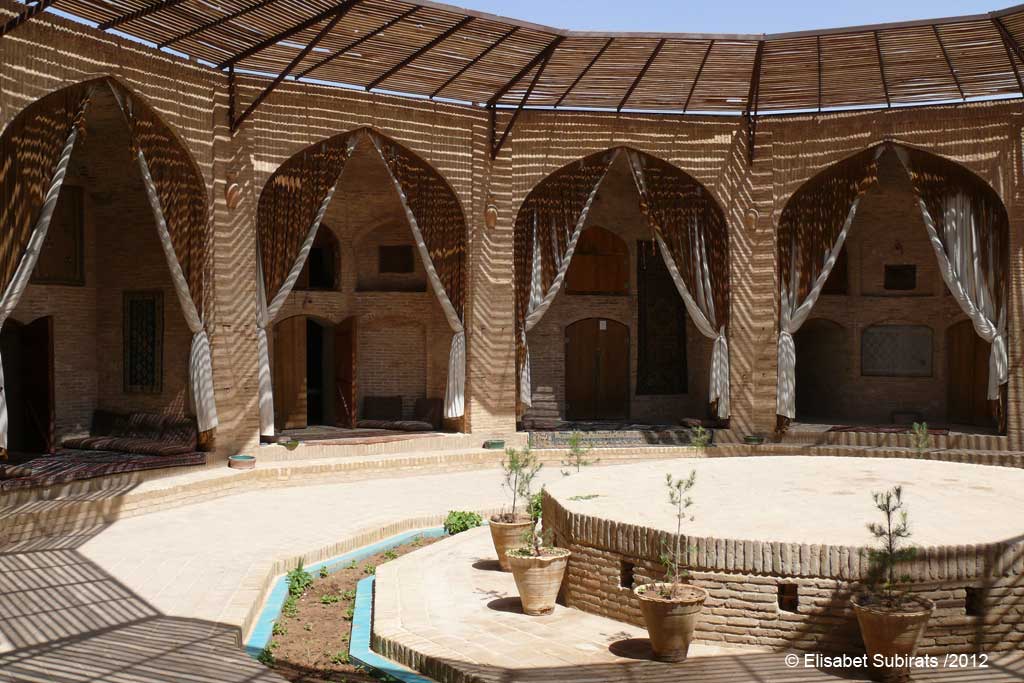 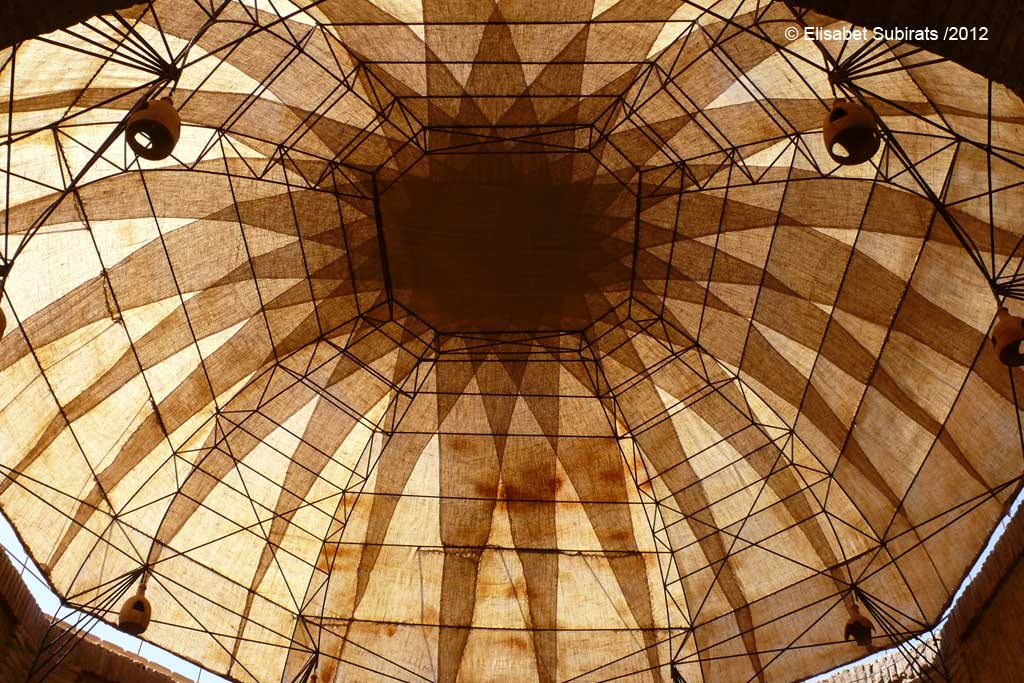 The following day the caravanserai’s owner drove us to Yaz, we were very lucky! After leaving our backpacks at the hotel, we went directly to the Ateshkadeh.

Zoroastrians come from around the world to see this Ateshkadeh, often referred to as the Zoroastrian Fire Temple. The sacred flame, visible from the entrance, is said to  have been burning since about AD 470 and was transferred from Nahid-e Pars to Ardakan in 1174, then to Yazd in 1474 and to its present site in 1940. Above the entrance of the temple you can see the Fravahar symbol, one of the best-known symbols of Zoroastrianism, the state religion of ancient Iran. 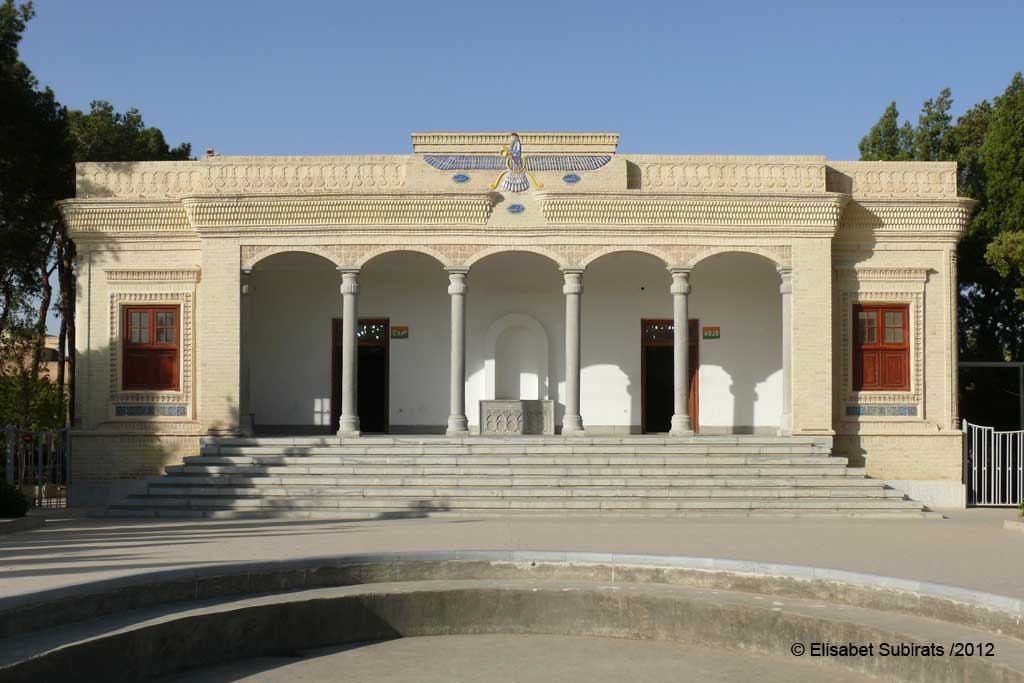 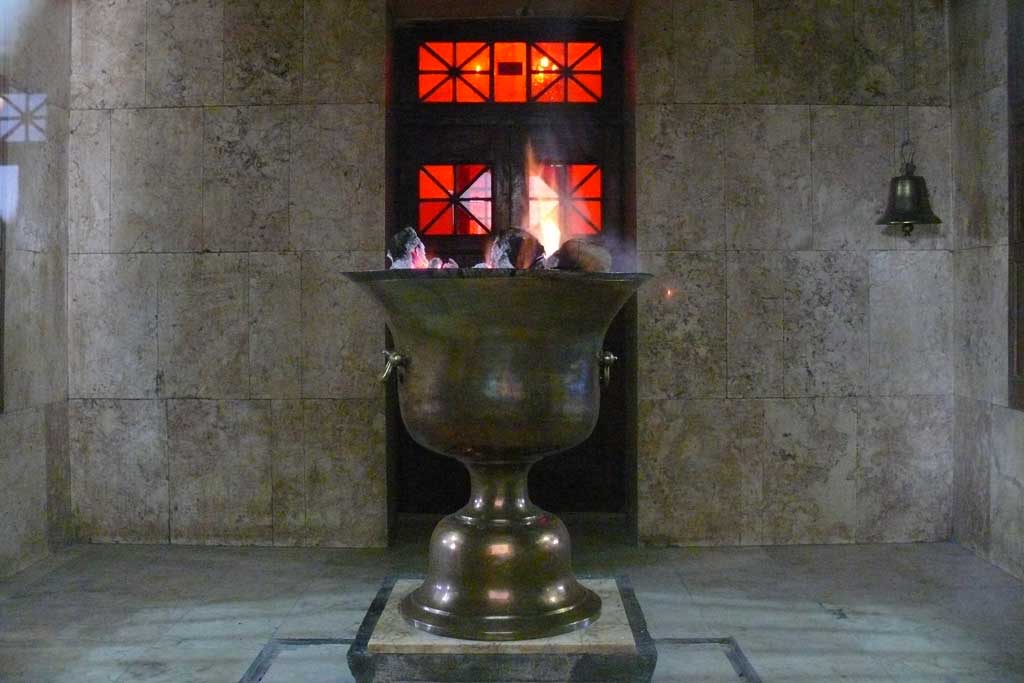 After paying my respects to the Sacred Flame, we took a taxi to visit other Zoroastrian structures, the towers of silence, a little bit far from the city. Zoroastrians believe about the purity of the earth and dead bodies were not buried but left on these towers of silence where vultures can clean everything. 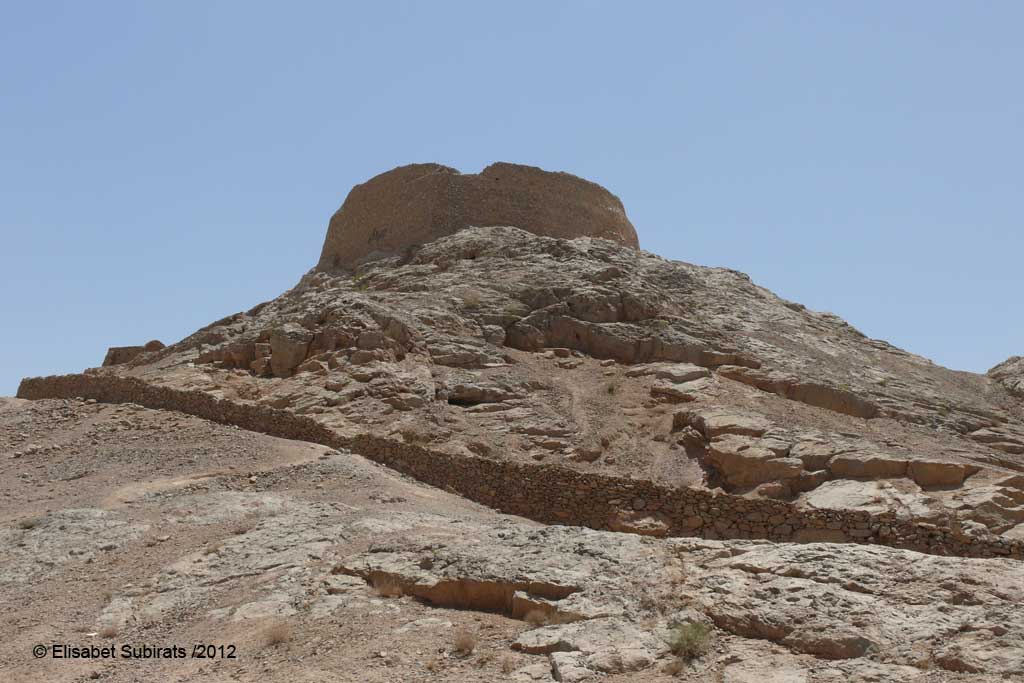 These towers are not used since the 60’s and one can climb up to the top to visit them. During the trek to Zagros my poor trekking shoes, the ones who accompanied me to Machu Picchu, Patagonia, the Balkans and Pyrenees died after 7 years of loyal service. I did not find a better way to honor my heroic shoes than a Zoroastrian burial, like in ancient times. Hope that nobody saw me! 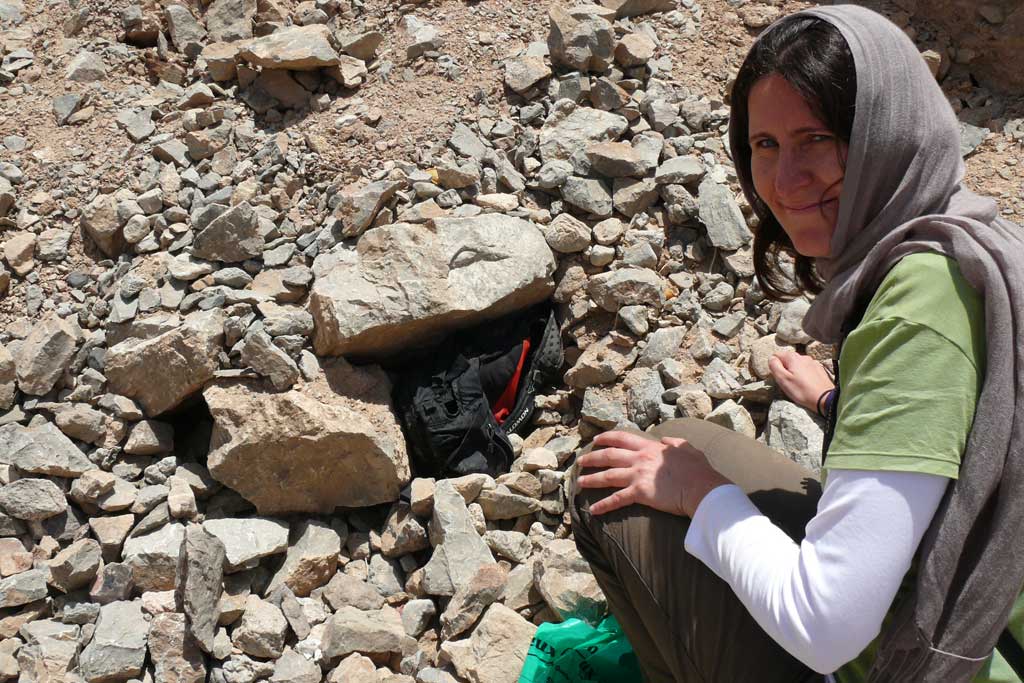 Back to the city, we got lost in Yadz’s labyrinth of alleys, with no direction. The old town is basically an ensemble of mud buildings with its characteristic badgirs or wind towers. This ancient air conditioning system consists in catching the breeze and direct it to the rooms below. Unfortunately I could not do an extensive visit of the city because it was really hot and all these clothes + scarf on me were killing me. It was really a good break to visit the very interesting the Yadz Water Museum with super explanations about the city’s underground water channels (qanats) and ventilated wells to irrigate fields and supply the city with drinking water. 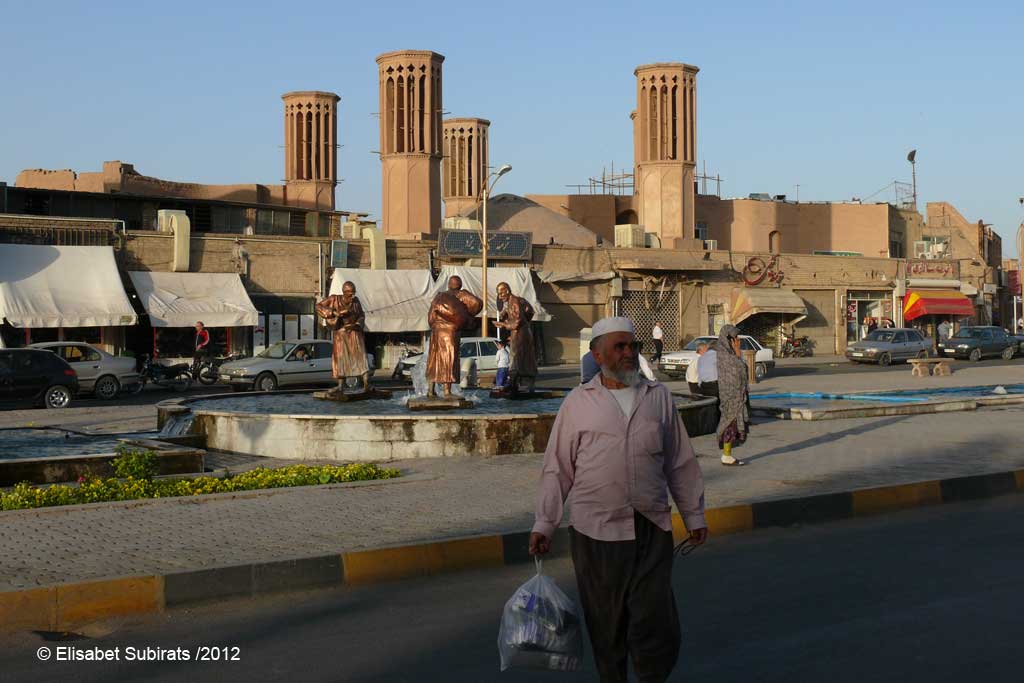 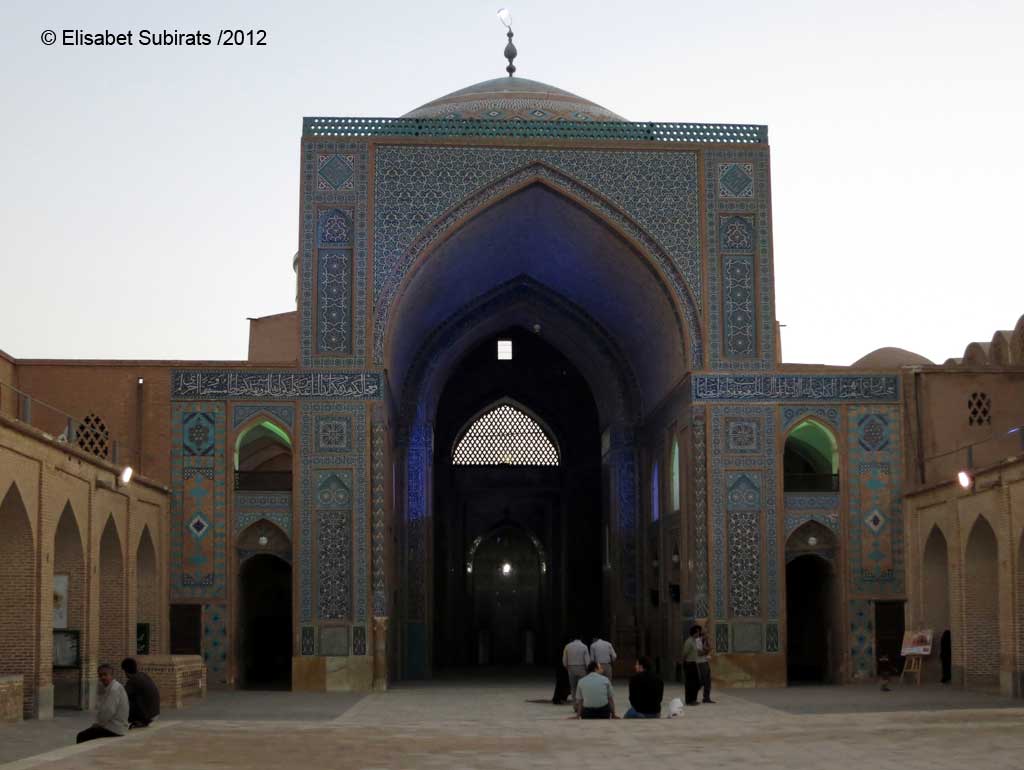 Permanent link to this article: http://holaworld.fr/the-sacred-flame-at-yadz/