All the colors in Sichuan

In the heart of Yunnan province, the fast flowing Yangtze River has cut a dramatic gorge so narrow in some places that, according to the legend, a tiger jumped across it to escape from a hunter. That is how Tiger Leaping Gorge, also reputed to be one of the deepest gorges in the world, got its name.

The Tiger Leaping Gorge is considered one the most beautiful treks in China and I did not want to miss that so from Chengdu I took a flight to Lijiang, a popular stop before the trek and which I visited during my first day in Yunnan.

Lijiang is a beautiful town of cobbled streets, wooden houses and small canals, once the home of Naxi minority. Today it has the Unesco stamp and every inch of the Old Town is occupied by souvenir stalls, cafés, banks or restaurants. 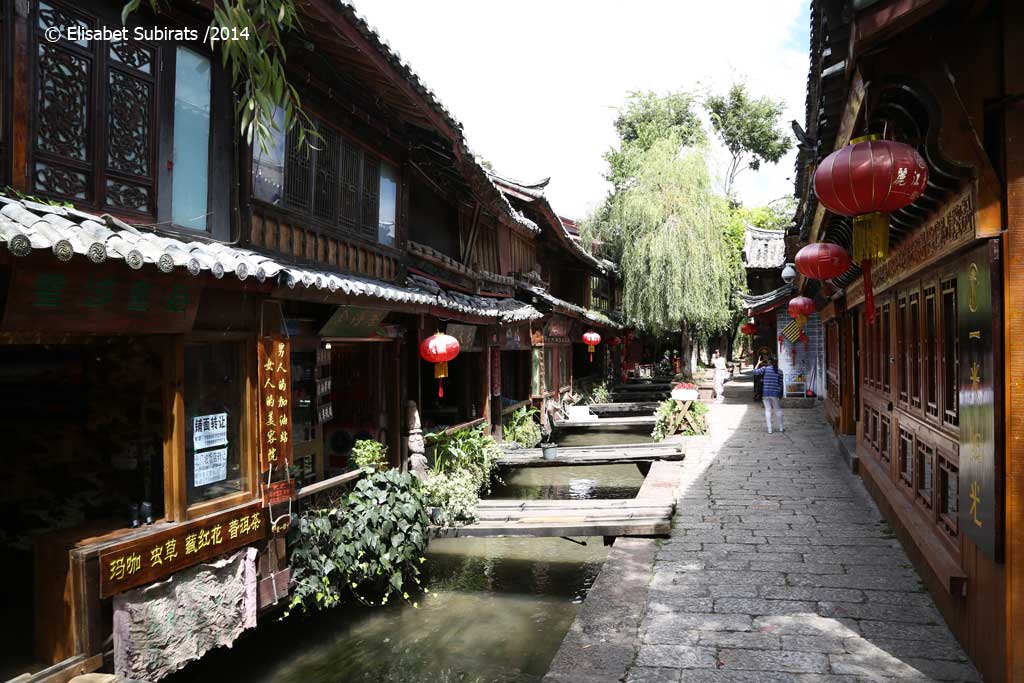 Five millions of tourists a year concentrated in Market Square and surrounding alleys, Naxi music, Naxi cuisine, Naxi scarfs, Naxi calligraphy . . . but where are the real Naxis? I guess they fled from Lijiang long time ago (and I did not want to stay longer). 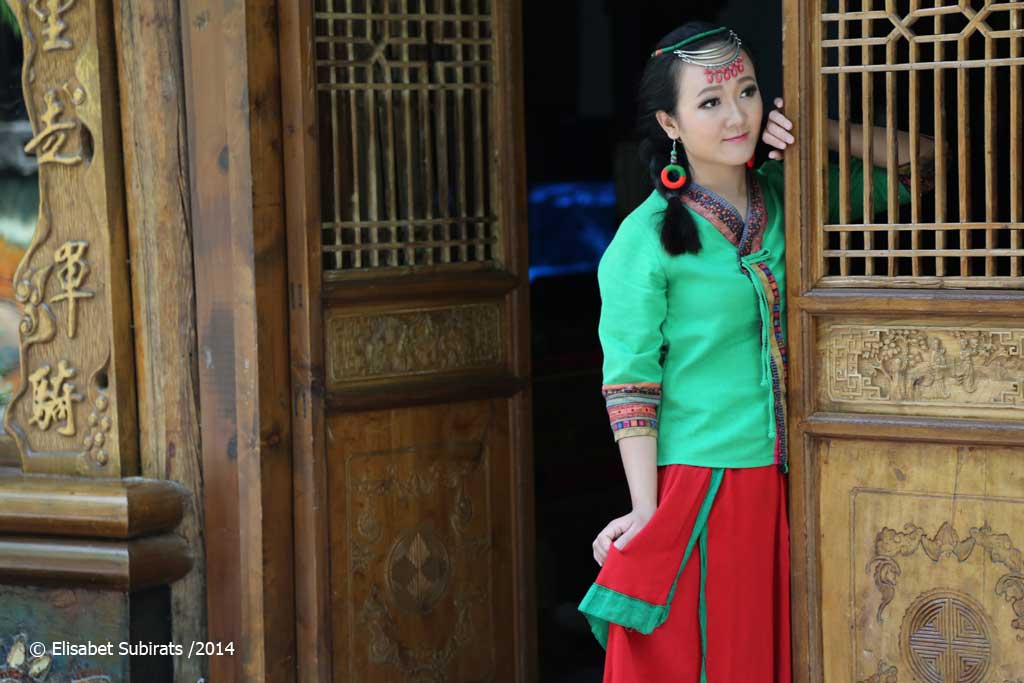 The two days trek started the day after at 7.30. From Lijiang there is a local bus to Shangri La and people can ask the driver to drop them off at Qiaotou, the starting point of the trek. I did not want to do the trek alone (guidebooks say it can be dangerous) so I preferred to pay a little bit more and take a private bus going from the guesthouses directly to the Tiger Leaping Gorge, where it was easier to find other trekkers. And that’s how I met Fathiyah, Itai and Shay my mates for this trek 🙂

At Qiaotou (1.835 m) there are two routes through the gorge: the “low road” runs close to the river, is paved and accessible to tourist buses and other vehicles while the “high road” is the old path that links the few houses along the gorge and that’s the road that we took. 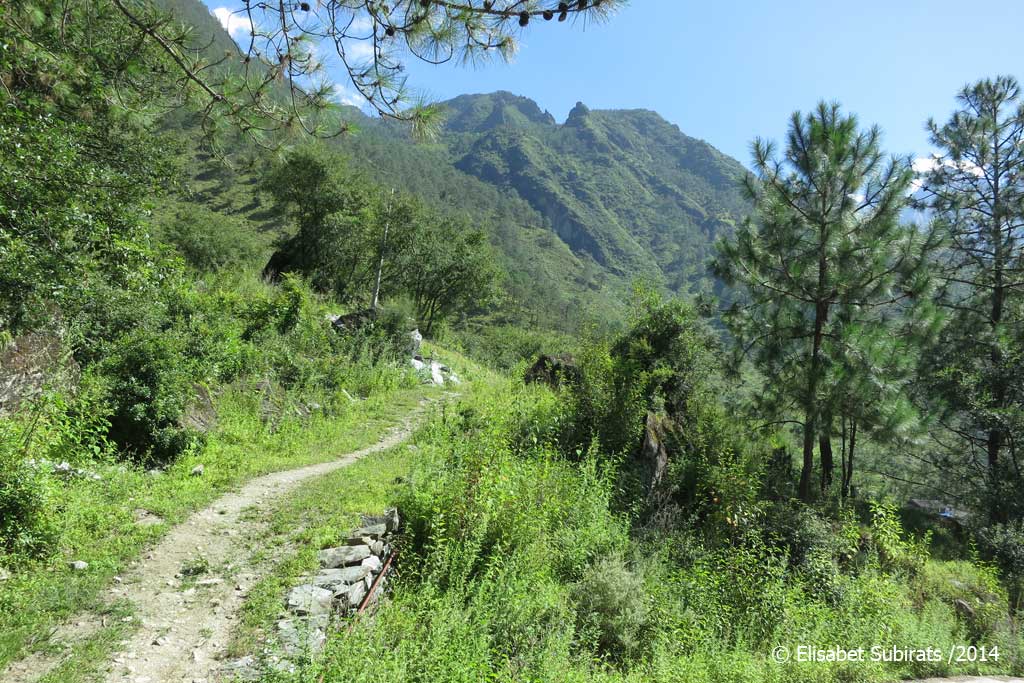 The first day (20 km, 8 hrs.) was the hardest with a combination of new road and small farmers’ trails. We were following a Dutch group with their own local guide and I think that we took many shortcuts because we never saw any of the red marks indicating the good trail that we were supposed to see. Anyway, we always were climbing up and taking the left path. The first two hours passed quickly and we were soon at our lunch point, a simple restaurant managed by a Naxi family. 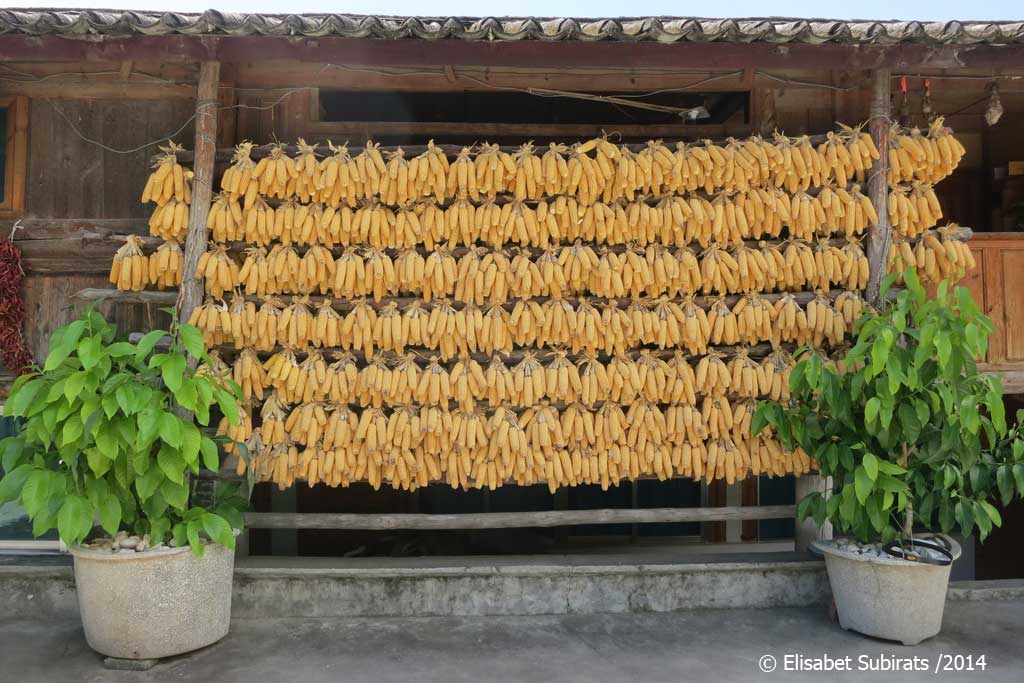 We made sure to fill our stomachs well because after that stop the famous “28 bends”, where the path twists and turns, were waiting for us. I had read about this 28 bends (marked on the trail as 24 bends) and although the climbing was steep I did not find them so difficult but it was terribly hot so it was very tiring. 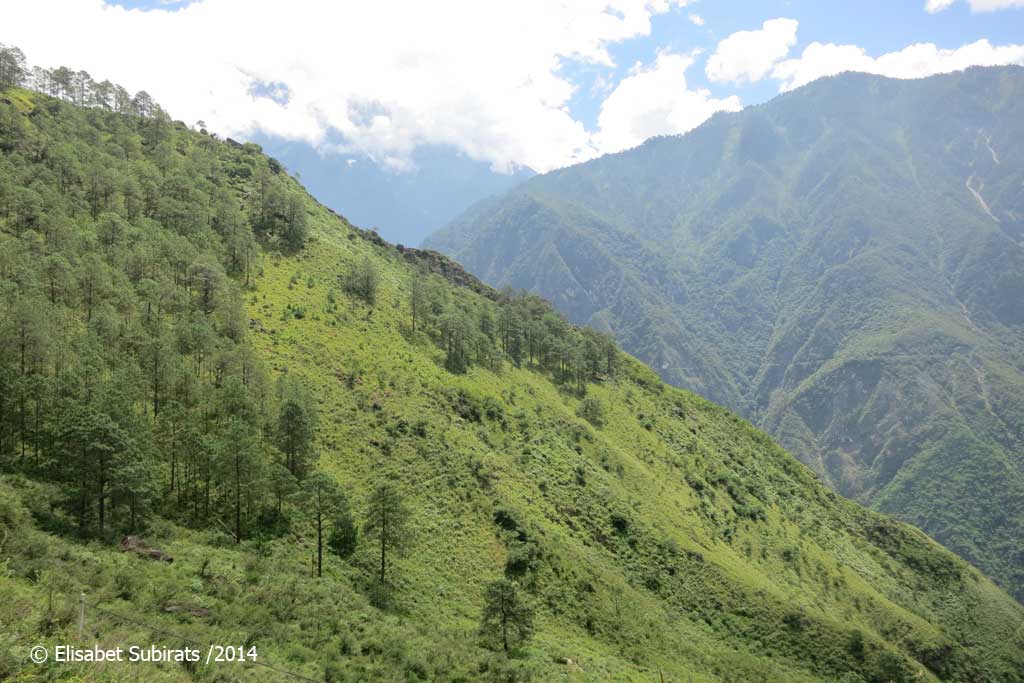 There is the possibility to hire a pony for some yuans but only the Dutch’s local guide needed it, ahahah. After many stops we arrived at the highest point of the trek at 2.660 m with breathtaking views of the river and mountains. 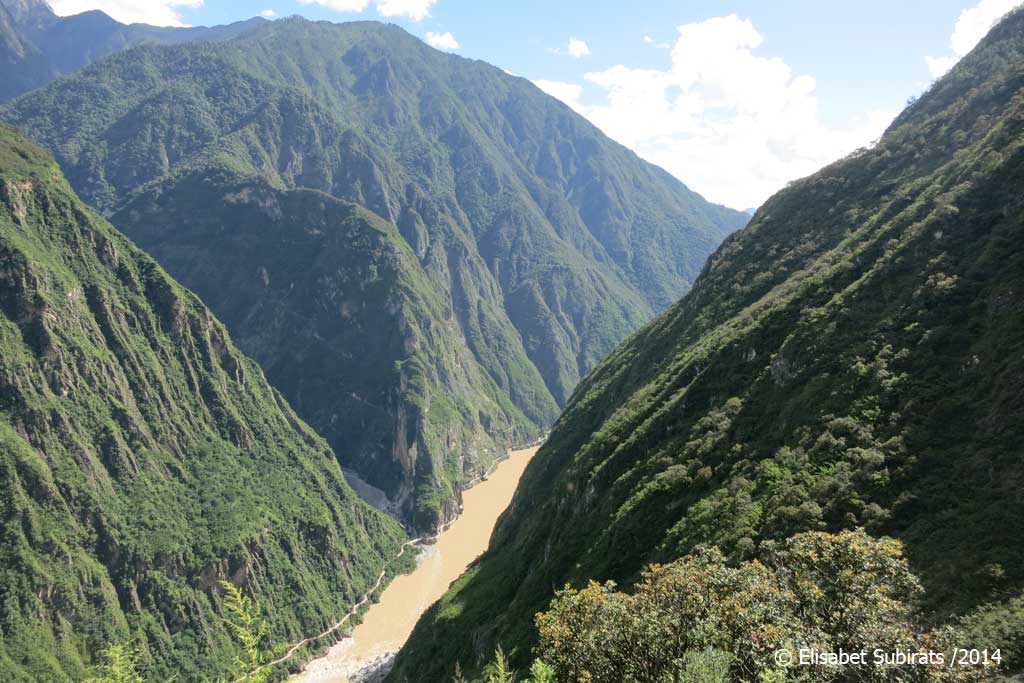 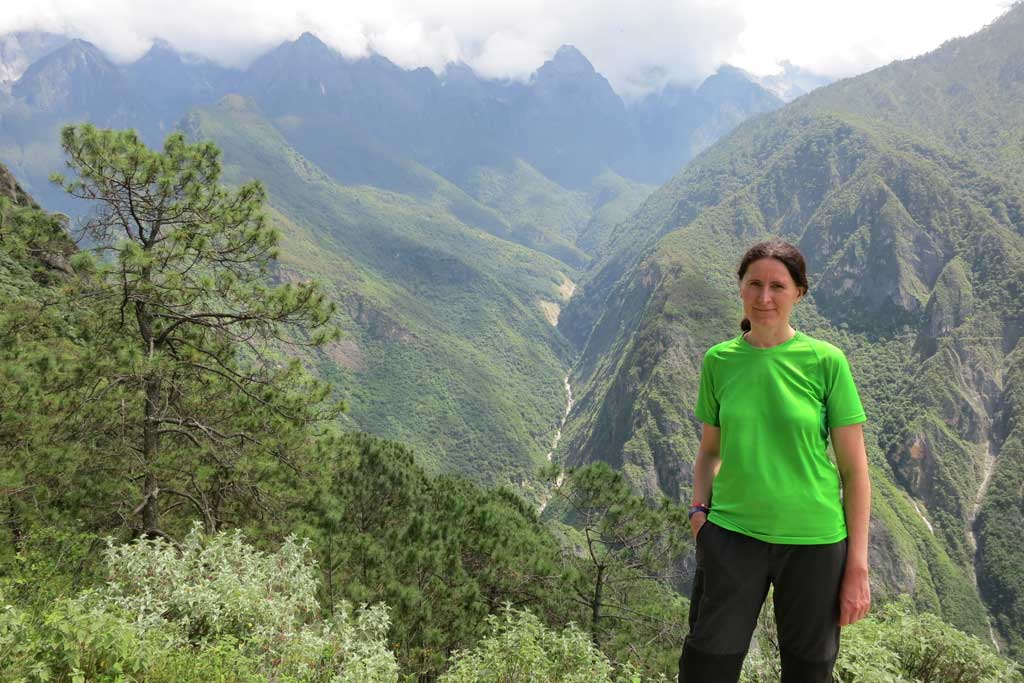 We still needed two more hours of flatter land to get to Halfway Inn, where we had decided to stop that night. 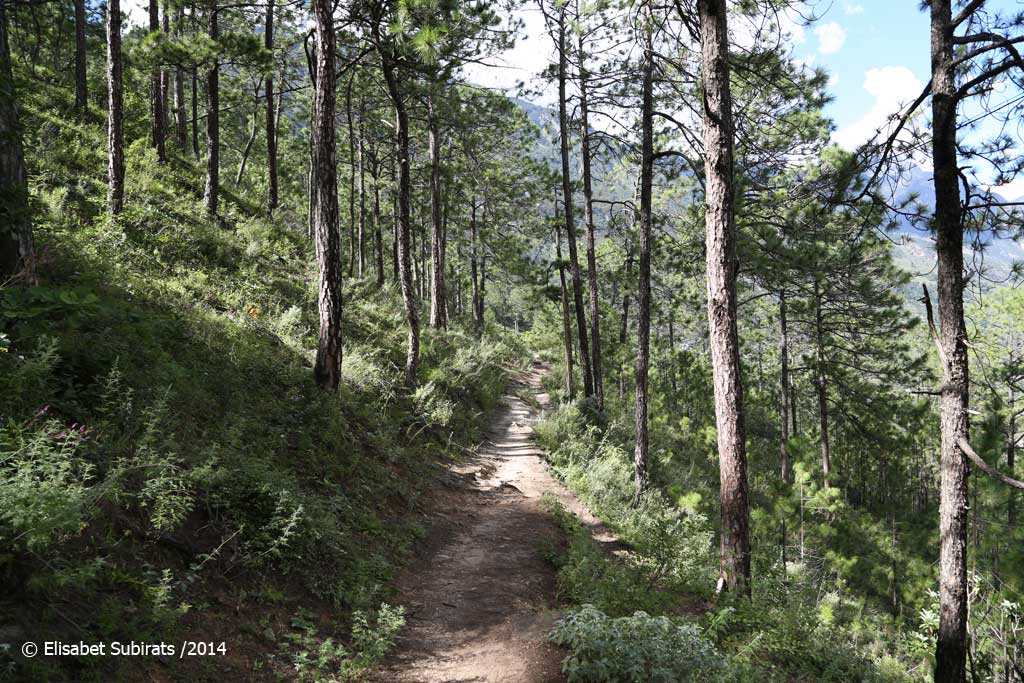 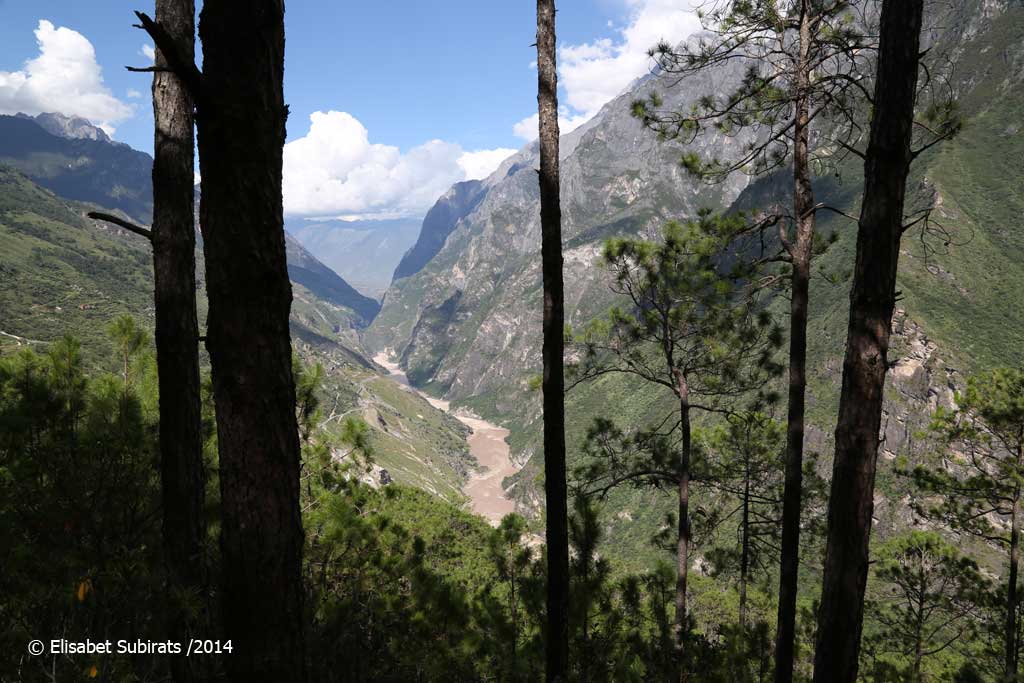 I thought that I had seen the best views of the day climbing the 28 bends but the views from the window of my room, were not that bad 😉 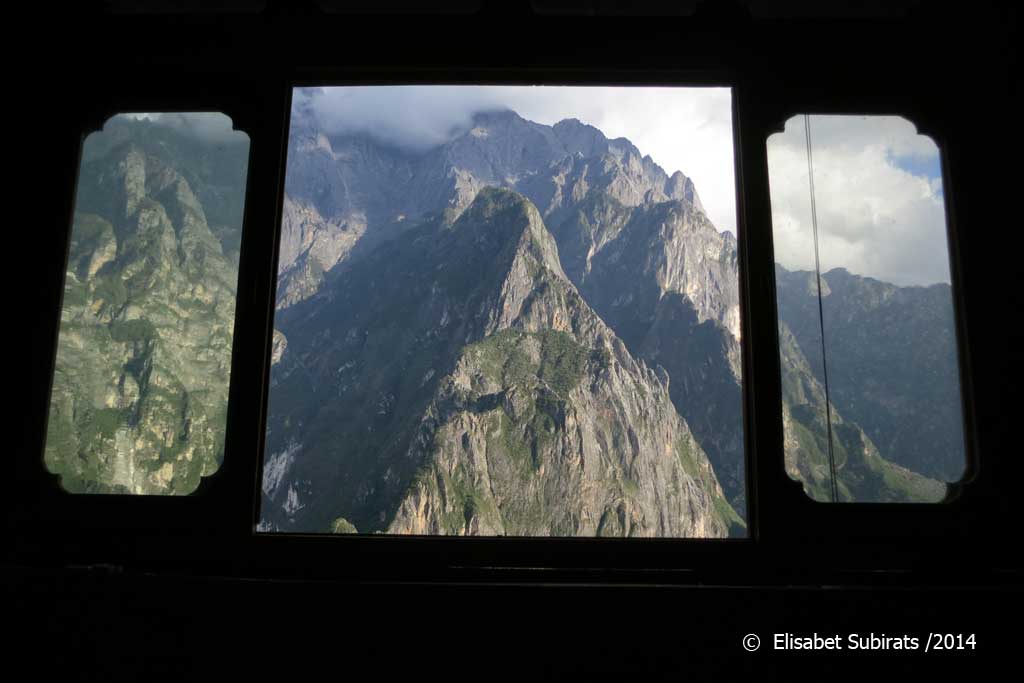 At dinner time the Dutch guys joined us and we all had a nice chat with great food and beers on the terrace of the inn. The mountains disappeared in the dark but they were replaced by 5 million stars. 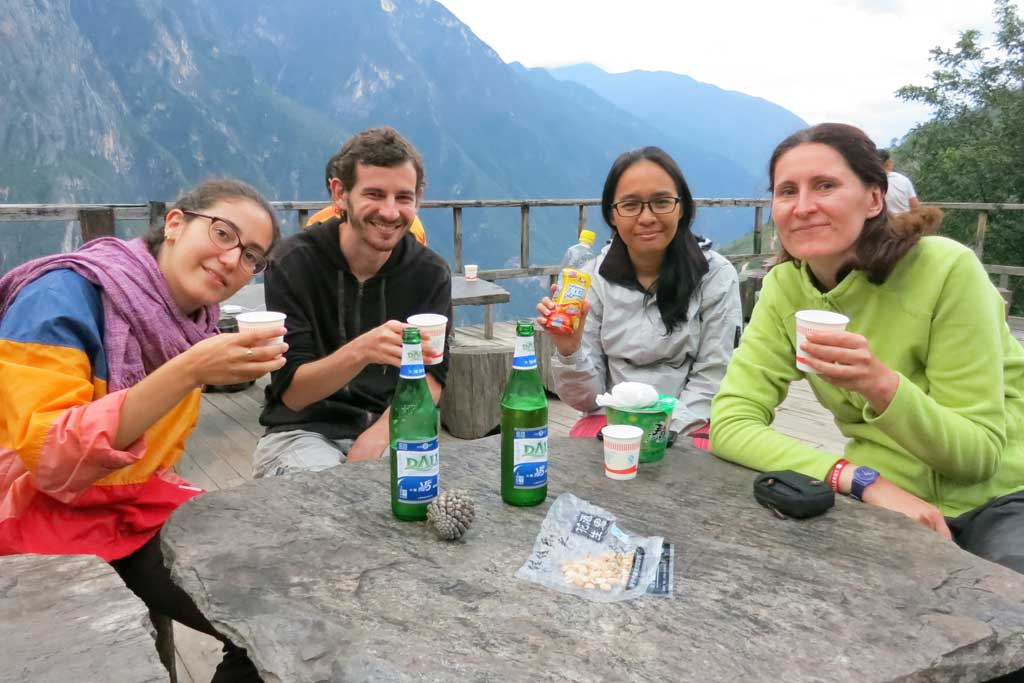 The second day was a short (8 km, 2 hrs.) and easy walking and we could enjoy the breathtaking views of the Jade Dragon Snow Mountain (5.596 m) different landscapes and some waterfalls. I preferred the first day trails with more varied landscapes but on the second day we were closer to the river and we could hear its strong roaring. 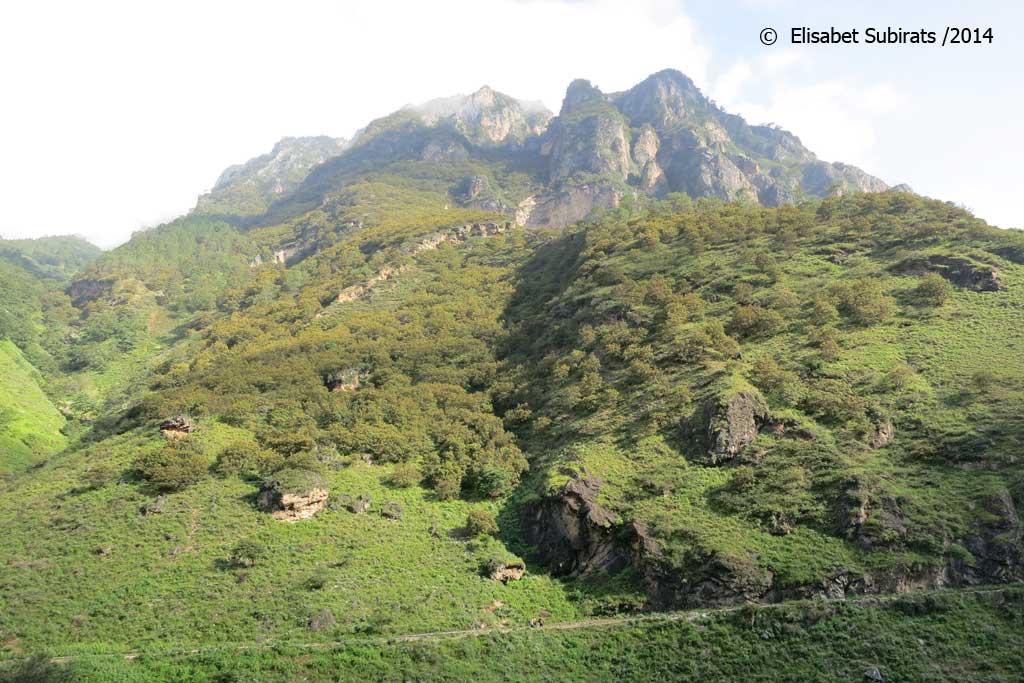 Once at Tina Guesthouse, the end of the trek, some of my mates went down to the middle rapids where according to the legend the tiger had leapt across the river (two hours round trip). This is an insanely steep path and I did not want to kill my knee so I chose the “beer option” at Tina’s and I just saw the pictures when they came back.

Back to Lijiang, I decided to give another opportunity to the town and went out for a walk and some night shots. I thought that once the day tourists had left, Lijiang would be less crowded and touristy but when I saw that Market Square, once the haunt of Naxi traders, looked like an open air disco I decided to go to sleep early that night.

Permanent link to this article: http://holaworld.fr/tiger-leaping-gorge-trek-in-yunnan/