Persepolis is one of these mythical places that I have always wanted to visit, a kind of dream made true.
It is believed that Cyrus the Great chose this site as ceremonial capital of the Achaemenid Empire (ca. 550–330 BC) but actually it was Darius I who built the terraces and the great buildings. Persepolis was used basically to celebrate the Persian New Year’s festivities, during spring time.

The day started very early, at Shiraz. We had contracted the services of a private guide, who drove us to the site and gave us an introductory explanation of the main sights. Then we had time for ourselves to explore the different constructions better and to take some pictures. 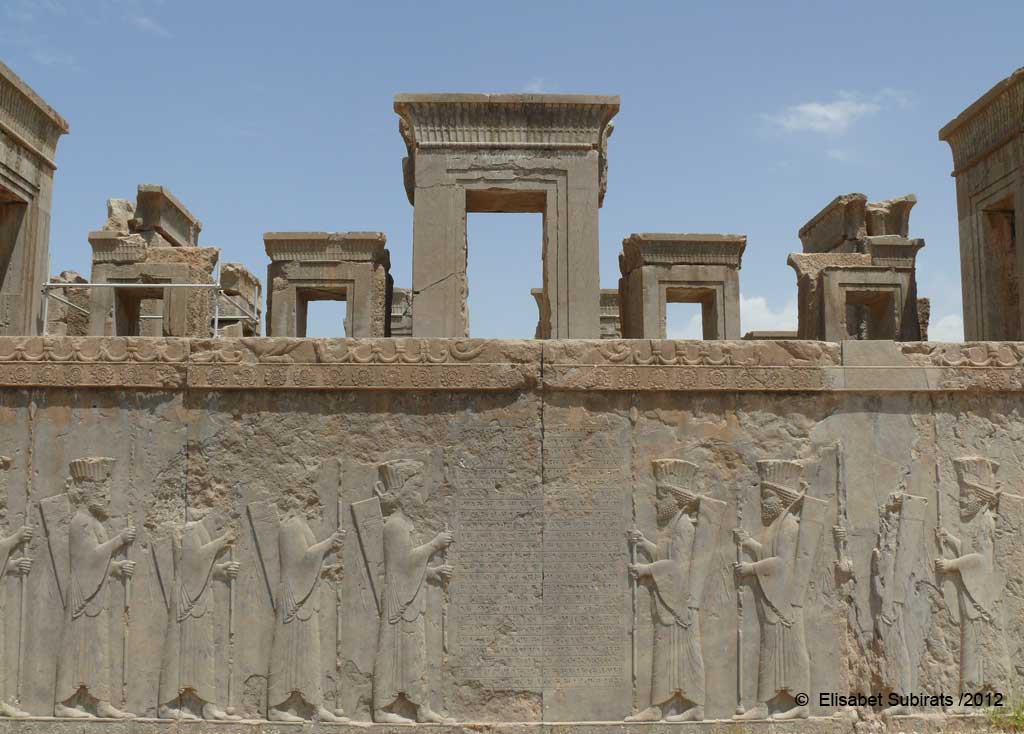 The buildings at Persepolis include three general groupings: military quarters, the treasury, and the reception halls and occasional houses for the King. They are built on a terrace 450m x 300m and 14m high, organized in 4 levels. The lowest level was for service and administration while the highest was for the nobles.

It was fantastic to wander around these ruins, with almost no tourists. The main construction of Persepolis is the Apadana and it is here where we spent most of the time. Built by Darius I, this impressive building with 20 m high columns and richly decorated in the past was used as Audience Hall. I supposed Darius wanted to show with this building how rich and powerful was his Persian Empire. He succeeded on it! It is here where one can find the famous Persepolian stairways with carvings of the Immortals, the Kings’ elite guards, and the reception of all the nations subject to the Persian Empire. The carvings are so detailed that it is easy to recognize all the different peoples by their dresses or hairstyle. Very impressive . . 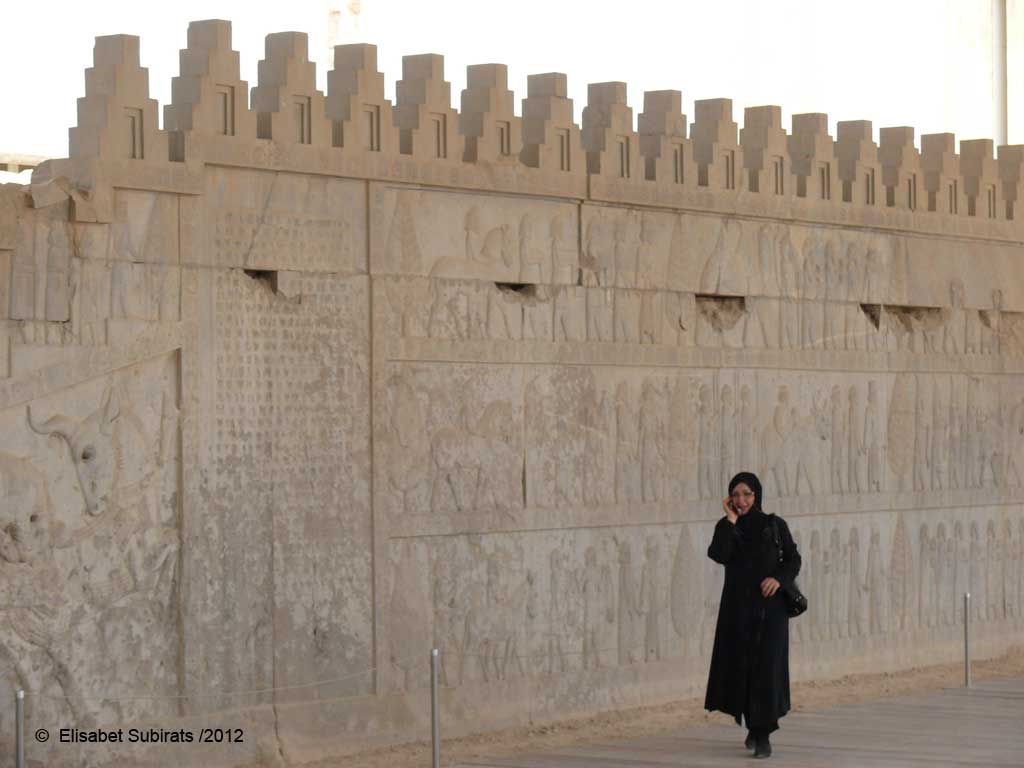 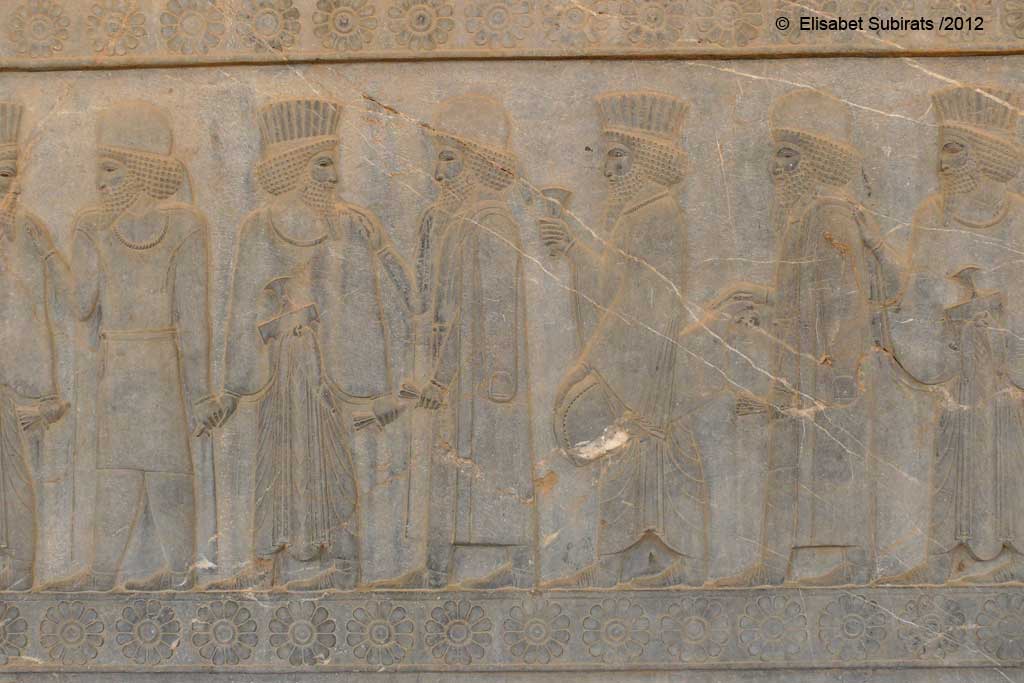 Other noted constructions are the Gate of Nations, referring to the subjects of the Empire, with its famous pair of Lamassus (bulls with head of bearded men) and the Tachara Palace of Darius. 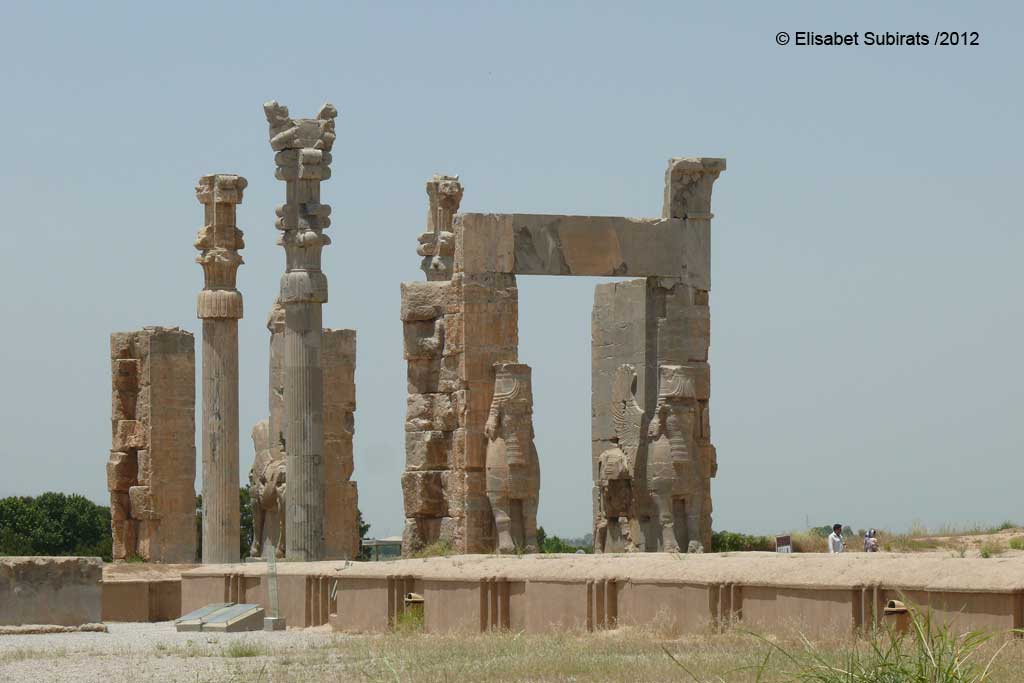 On the top of the hill there are some royal tombs excavated on the rock with beautiful carvings representing facades of an imaginary palace. For those who have visited Petra in Jordan these tombs will be a “déjà vu”. Despite the heat it was worth the climb because from here the views over the archaeological site are fantastic. As we were only 4-5 people around I could remove my scarf for the commemorative picture. 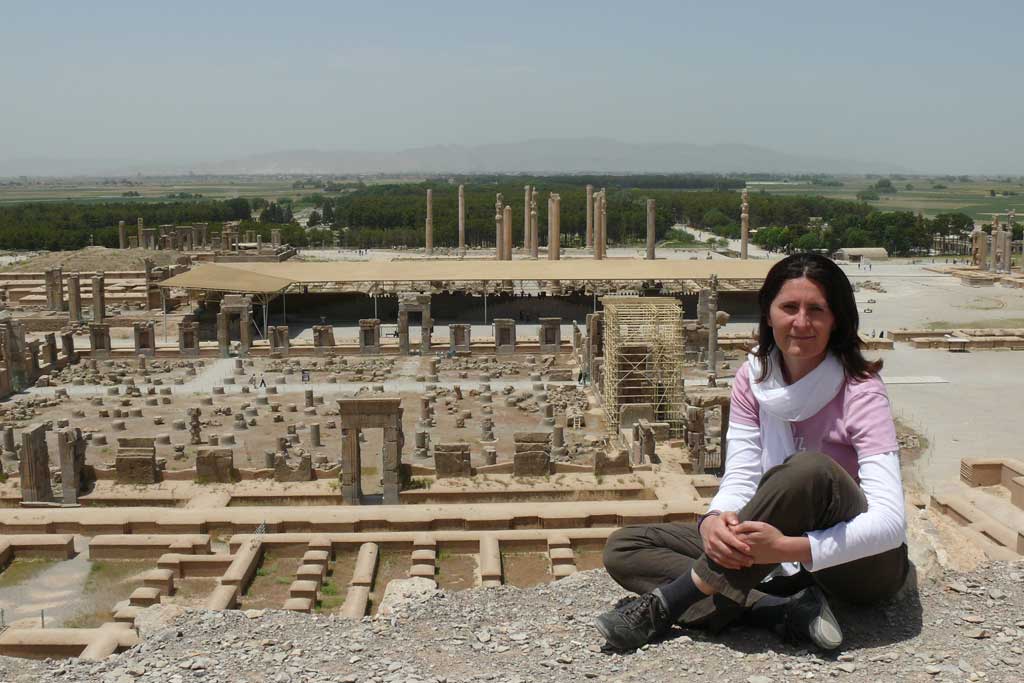 Not far from Persepolis there is Naqsh-e Rostam, an archaeological site containing 4 royal Achaemenid tombs of Darius I, Darius II, Xerxes and Artaxerxes. The facades of the tombs have the shape of a cross and the entrance is at the center of this cross. Inside, there is a small chamber where the king laid in a sarcophagus. These tombs look like the ones in Persepolis but this is a place not to miss because of its Seven over-life sized (king size, he hee) rock reliefs depicting some monarchs of the Sassanid period. 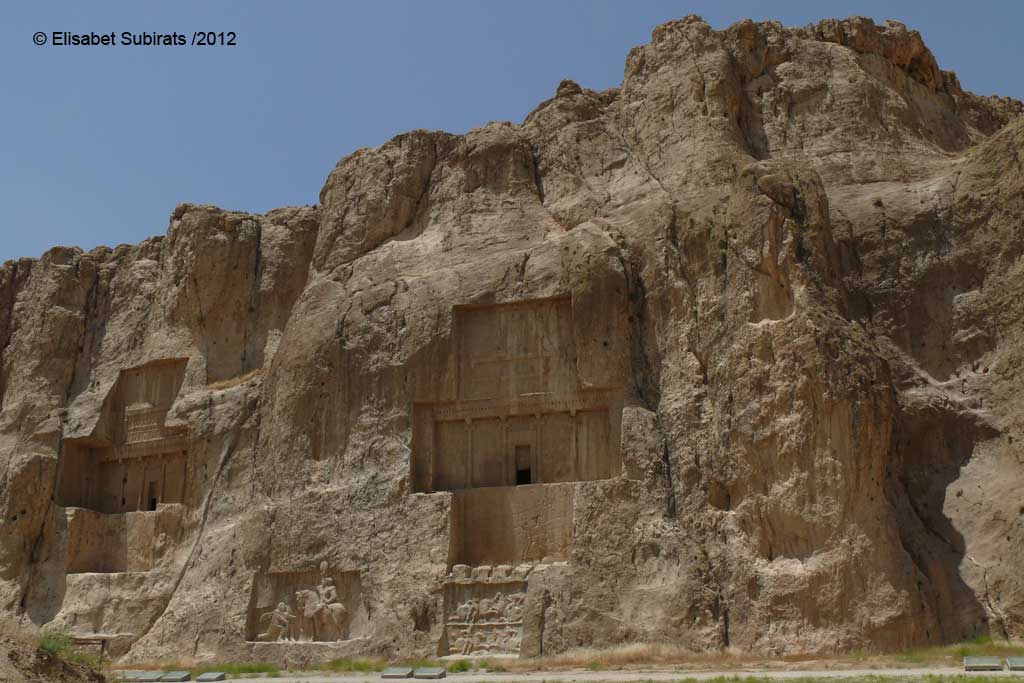 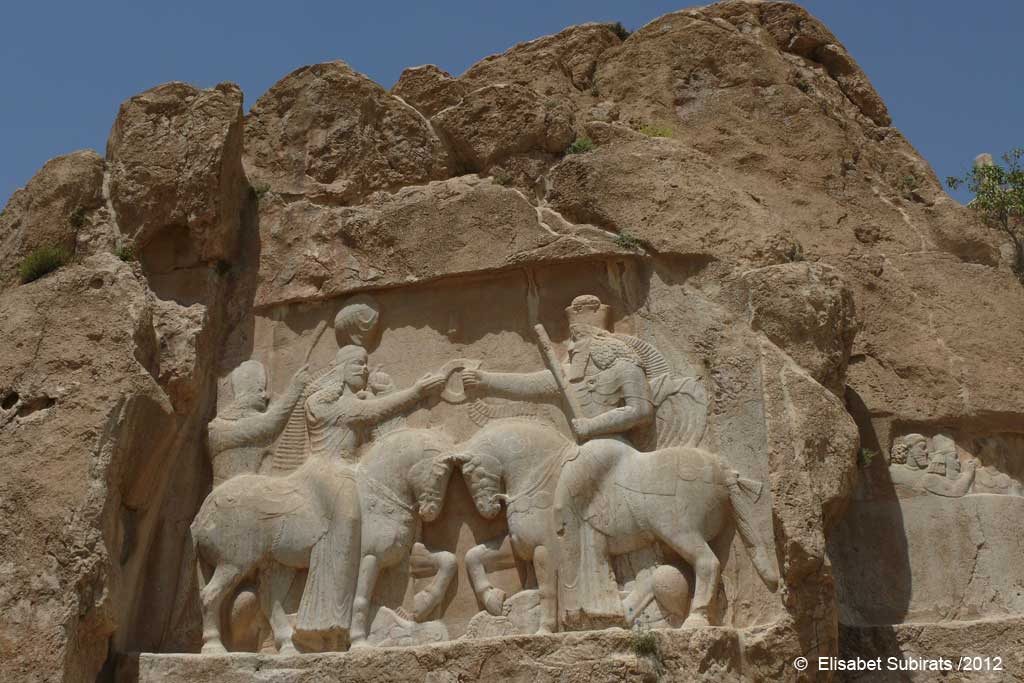 Back to Shiraz, we found no better way to end the day than a visit to Hafez tomb. Hafez (pronounced Hoofiiizz in Farsi) is the most loved poet in Iran and the visit to his tomb is a kind of pilgrimage for locals. This is a peaceful and charming place, with beautiful gardens, pools and a shady chaikhana (tea house) corner at the entrance perfect for a break. In the middle of these gardens there is Hafez’s marble tombstone protected by a temple-like structure. There is the popular tradition, especially between teenager girls, to ask a question about their future. Then they open one of Hafez’s books on a random page, the future is apparent in his words. 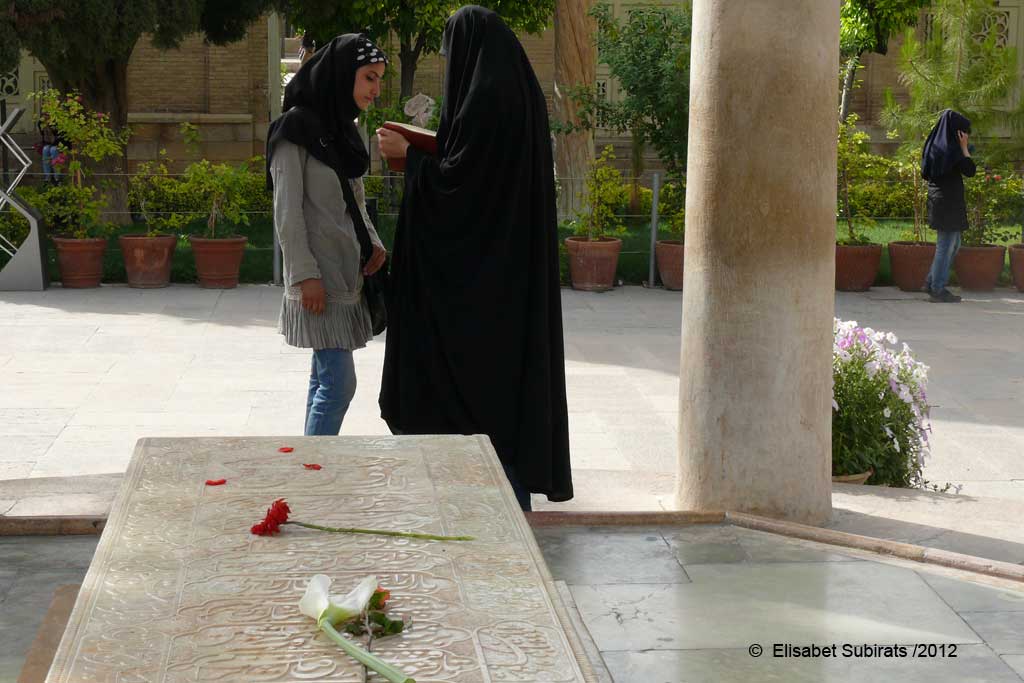 Hafez’s tomb was one of my musts of Iran. Once there, I couldn’t help murmuring his words:

“Even after all this time
The Sun never says
to Earth ‘you owe me’
Look what happens
a love like that,
it lights the whole sky” 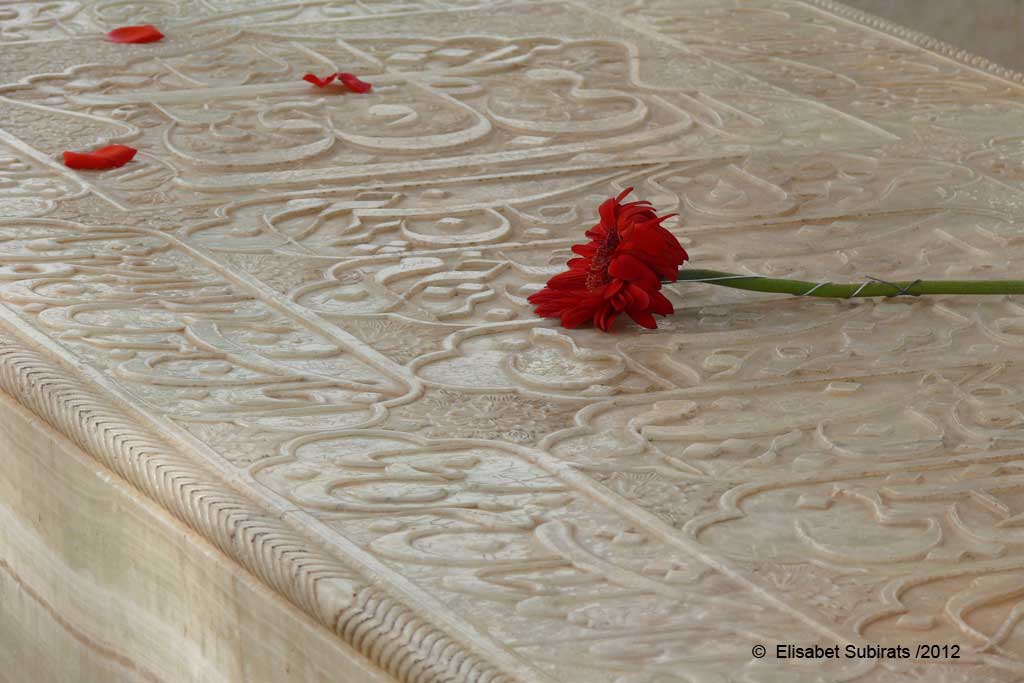 Permanent link to this article: http://holaworld.fr/two-dreams-made-true/