Jakarta and temples of Yogyakarta

Located at the junction of four tectonic plates, Australian, Philippine, Eurasia and Pacific Indonesia is the country with the greatest number and density of active volcanoes.

I have always been fascinated by volcanoes, they are a geographical feature inspiring me admiration and fear in equal parts and climbing some Indonesian volcanoes was a must on my wish list. Java has many interesting volcanoes and I decided to start with its most active volcano, the Merapi.

Gunung Merapi (2.968m) located immediately north of the city of Yogyakarta, means “Fire Mountain” in Javanese and it is one of the most destructive volcanoes in Southeast Asia.  It erupts on average every 5-10 years and is feared for its deadly pyroclastic flows – avalanches of hot rocks and gas that slide down the mountain’s steep flanks. For this reason, Merapi is often declared off-limits to visitors.

We started the climbing from Selo (1.575m) at midnight to arrive to the top for sunrise. The path up to the top was very steep (+10%) and it was hard, very hard to climb. In addition I had a problem with my headlamp and I could not see where I was putting my feet, it was horrible! Fortunately one of the guides stayed with me and from time to time he tried to light up my path with his torch but I was walking more slowly than usual and I saw the sunrise from the plateau (2.700m), not from the top. The good thing is that I saw the same sunrise than my mates, 300m higher than me, plus the sunrise on Merapi’s final slope and it was great! 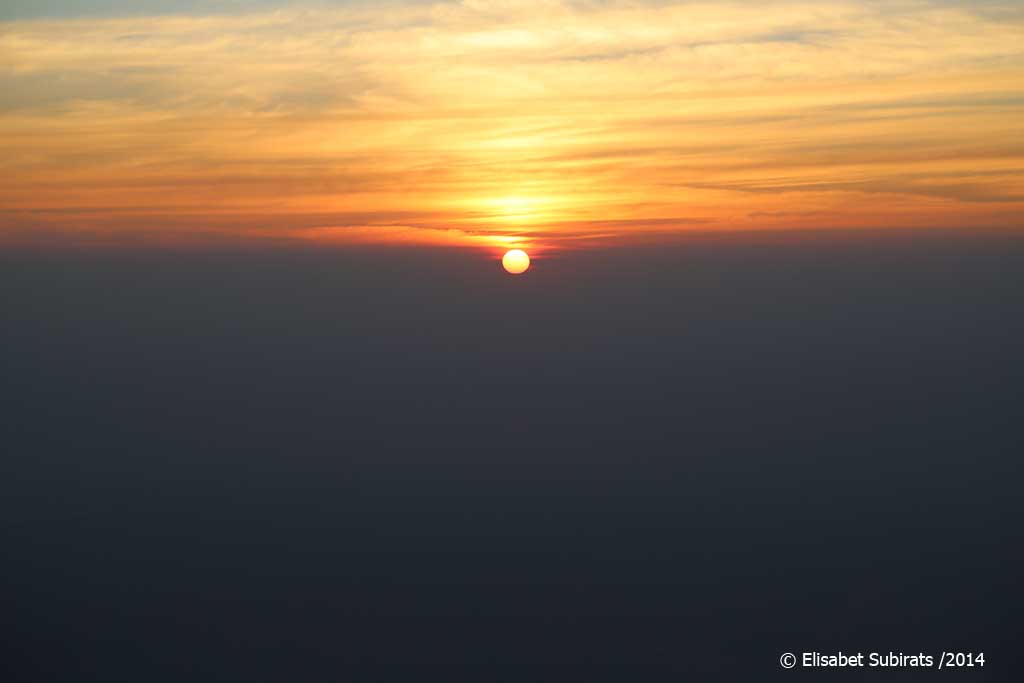 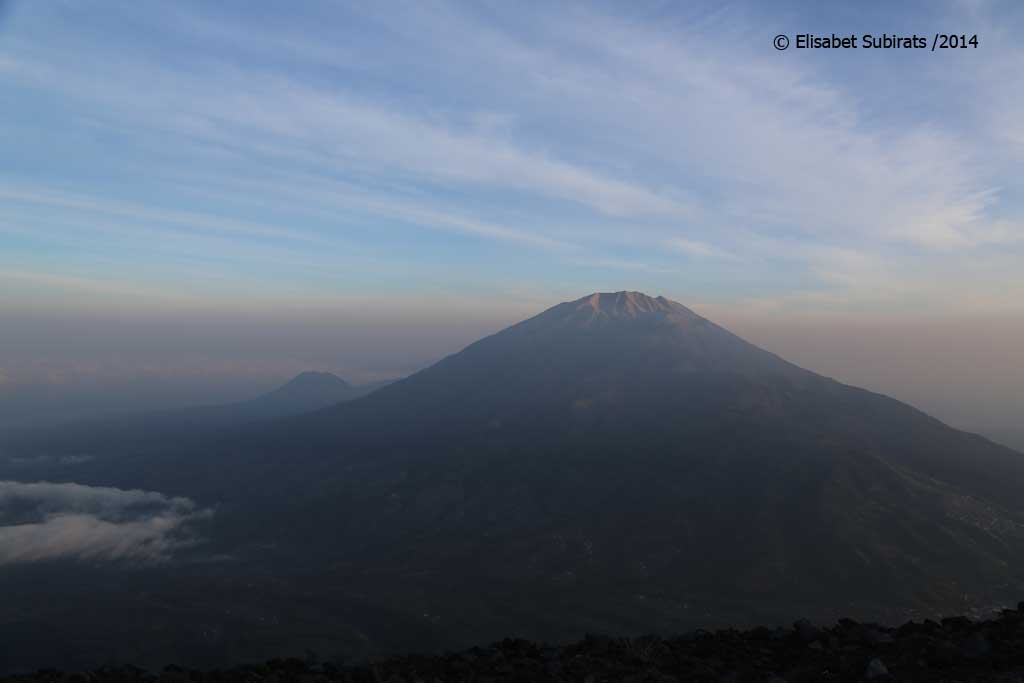 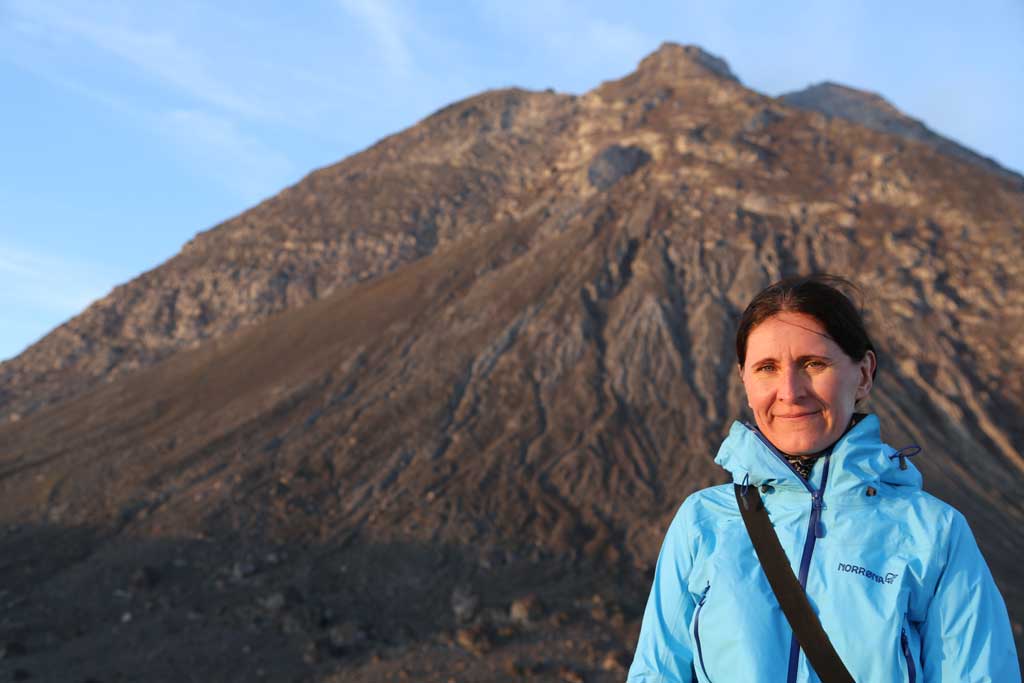 Gunung Semeru (3.676m), the highest volcano in Java, looked more excited (=it was showing more activity) than usual so I decided to go directly to Gunung Bromo located also in Bromo-Tengger-Semeru National Park.

Gunung Bromo (2.329m) is the active cone inside the giant Tengger Caldera, one of Indonesia’s most scenic locations in East Java and sunrise in Bromo is a very popular excursion for tourists because it is very easy to reach.

For Bromo, the two closest starting points are Malang and Probolinggo. In Malang prices are crazy and Probolinggo is awarded by visitors as the place with the most dishonest people in Java (so it can be more expensive than Malang), hard choice! At the end I joined a Bromo-Kawah Ijen-Denpasar tour from Yogyakarta, which included all the transportation and accommodation for the three days.

The first day was spent completely on the road but my travel mates were very nice so it was fun. On the second day we left the village of Cemoro Lawang at 4 am and went up to Gunung Penanjakan (2.770m) by jeep. Penanjakan is a volcano located just out of the caldera which hosts Bromo and other four volcanoes. From Penanjakan there is a very beautiful panorama over the caldera, with the smoking Semeru volcano in the background, and the sunrise was gorgeous. 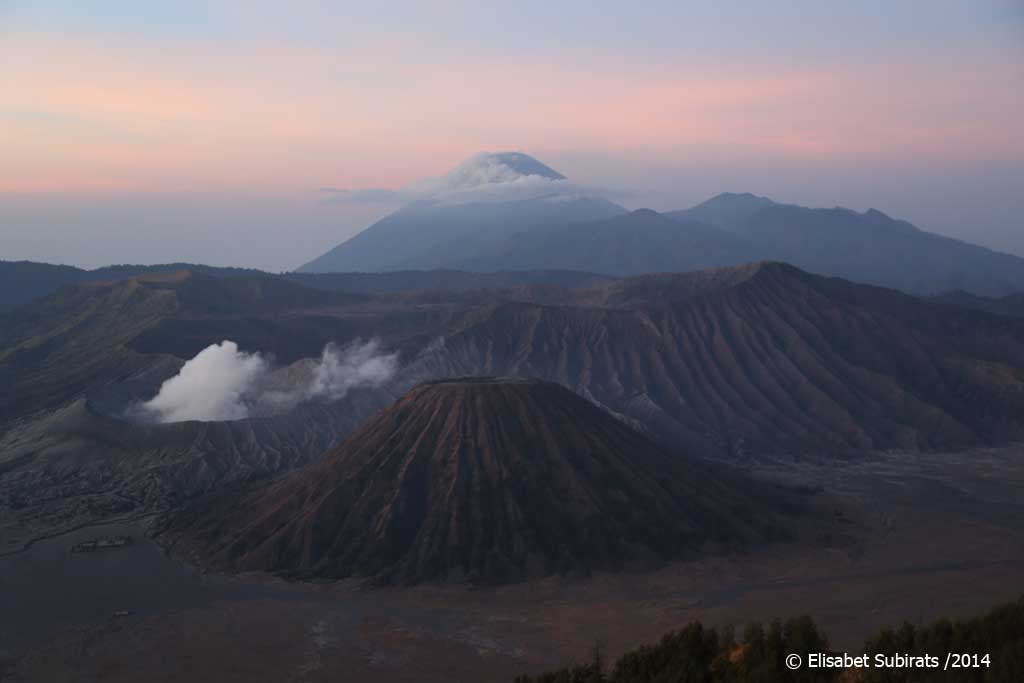 After an hour or so, already with daylight, we went down to the giant caldera, formed thousands of years ago after the explosion of Tengger Volcano. It looks like a big pot 12 km wide and 300 m deep fully covered by sand, stones and volcanic ash. The climb to the crater’s lips, at 2.392 m, is not hard but many Tengger villagers are there with their horses for those tourists who want to avoid the 246 concrete steps up to it. If you get to the lips before dawn, it is possible to see the incandescent flames vomited by the volcano: a reminder that it is not dead, only sleeping, and can wake up at any time . . 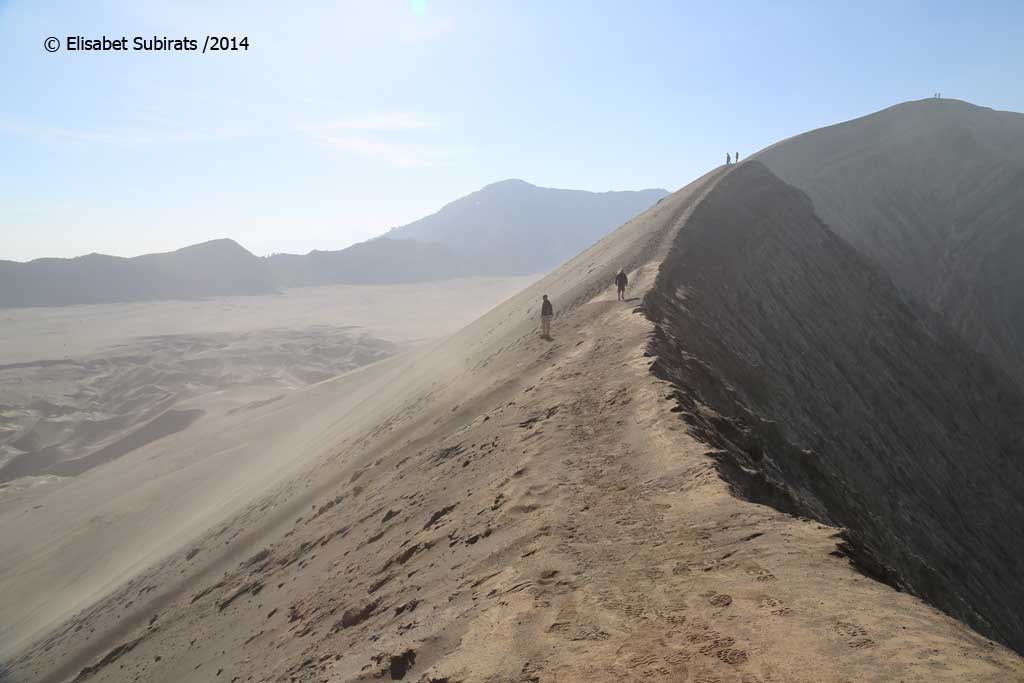 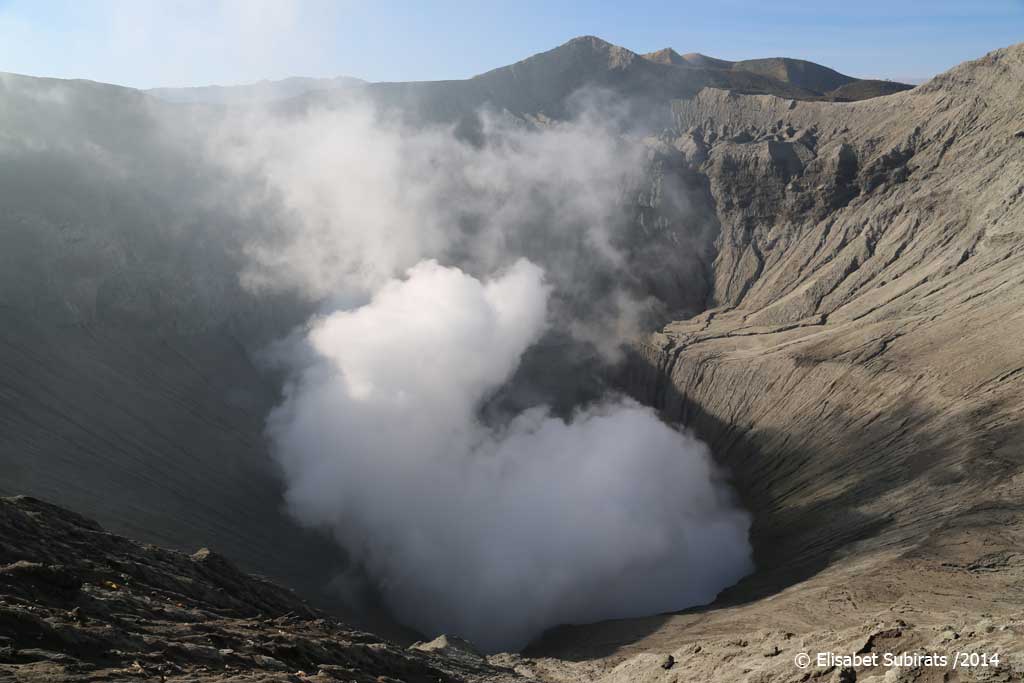 On the third day we left the hostel also at 4 am (sunrise watching is hard work!) to Ijen Plateau. The Ijen volcano complex at the eastern end of Java consists of a group of small stratovolcanoes constructed within the large 20-km-wide Ijen (Kendeng) caldera. Gunung Ijen (2.368m), its most famous volcano, contains the world’s largest acidic volcanic crater lake (called Kawah Ijen) famous for its turquoise color. The active crater measuring 950x600m is known for its rich sulfur deposits which are quarried by miners everyday. Still at night, we already saw some of them going down to the crater to cut the sulphur, weight it and transport it down to the village in a kind of bamboo baskets. Some of them do this same trip twice or three times a day, carrying 70 kilos on their shoulders, a titanic job to earn not much money at the end of the day: the kilo is paid 500 Rp so the best ones earn only about 10 euros a day! Some miners also sell some figurines molded with liquid sulfur to complement their incomes, I bought one to help them! 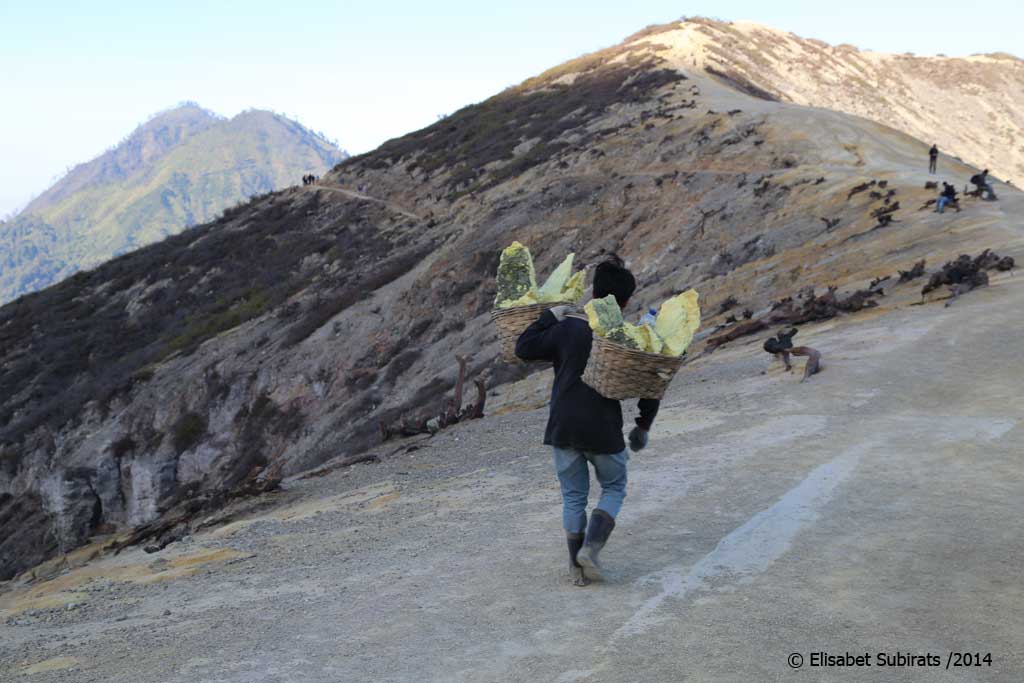 Once on the lip of the crater, we had the wind in our favour so we did not have any problem with the sulfur smoke and could admire the acid turquoise lake as much as we wanted, it was fantastic! On these occasions, I always think about Cristina, my geologist friend in Zaragoza, who would enjoy these wonders of the nature much more than me . . . hope she will enjoy them, somehow, through my pictures or these pictures will convince her to come so see by herself! 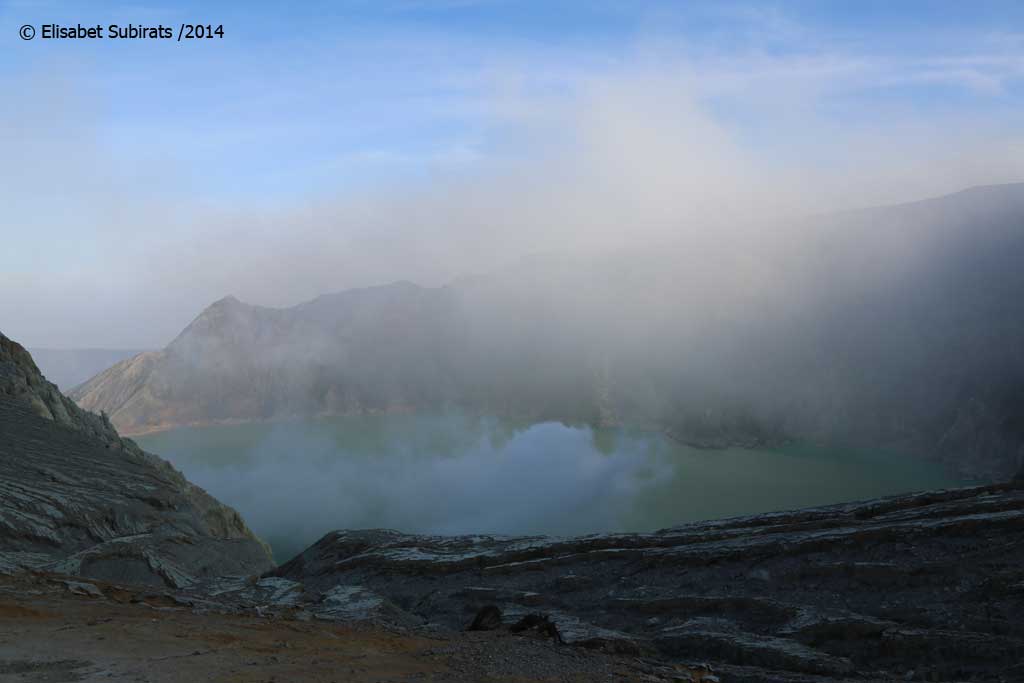 The path down to the parking area was also very nice, crossing a beautiful forested alpine area. That was my last stop on Java Island and three hours later I was already taking the ferry to Bali. After all these tiring days Bali will be the paradise?

Permanent link to this article: http://holaworld.fr/volcanoes-of-java/