I was very happy that Norbert decided to join me for this last Peruvian adventure : during the last days the road to Chachapoyas had been closed several times due to landslides and the few gringos that managed to reach the city did not look eager to start an adventure of this kind. Anyway once in Chachapoyas we decided to go on with the plan and we were the first people to book the Gran Vilaya Trek that season, starting the following day. 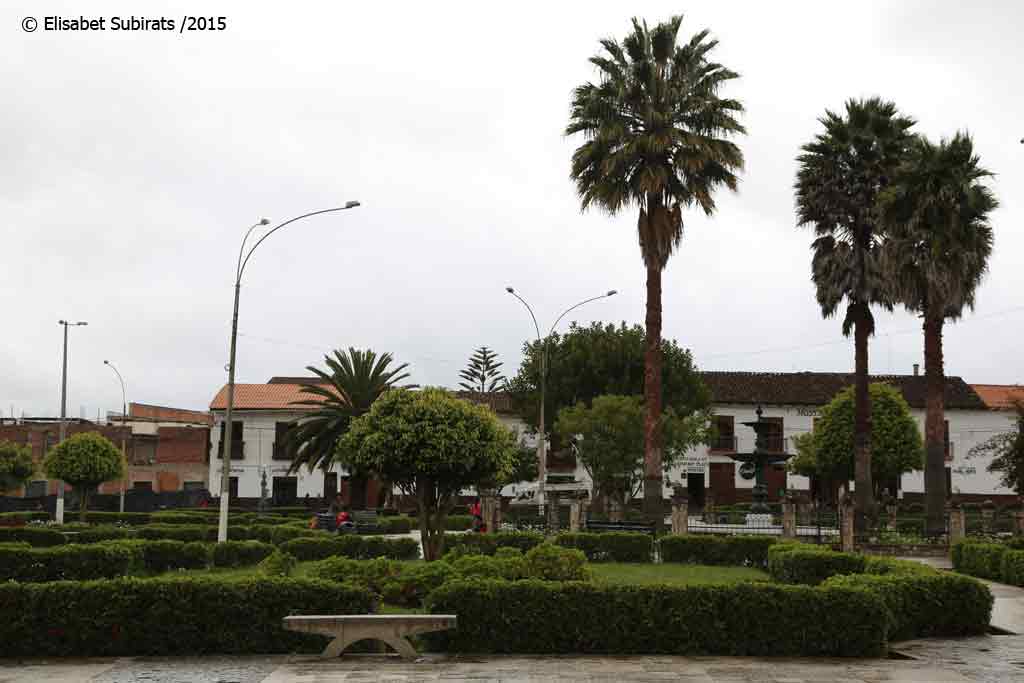 Here we are in “La Ceja de la Selva”, a natural region of Peru consisting in mountain cloud forests. La Ceja de la Selva is situated on the eastern flank of the Peruvian Andes from the Amazon low jungle and the Sierra del Peru. It starts between 500 and 600 meters, that’s where the Amazon plains and the mountains begin to rise. The forest reaches over 3.000 meters in the wetter areas or a much lower altitude when borders the Andean dry valleys.

Why I wanted to visit this region? Apart from seeing these remote landscapes, I was very interested in the Chachapoyas Culture. The Chachapoyas, also called “People of the Clouds”, were one of the most interesting pre Inca civilizations. They were basically warriors, who controlled these lands from AD500 until the Incas conquered them around 1493. Little is known about this civilization, who always chose high places in the mountains to live in circular stone houses. The Chachapoyas were tall and handsome people, blond with blue eyes and their wives were famous for their beauty. One theory is that the Vikings managed to reach these lands from the Atlantic through the Amazon River and they could not resist the Chachapoya women’s charms. Today we still can see their descendants (blond or red headed people with blue eyes) in the Peruvian city of Mendoza, they really look like Europeans until they open their mouth, lol

The Trek Gran Vilaya (4 days, 3 nights) is a mystic trek through the jungle, lost citadels (some of them still to be discovered), great panoramas, Inca roads and welcoming people which starts in Chachapoyas city and ends in Kuelap, the most important Chachapoya archaeological site. This circuit, also called “the Inca Trail of the North” requires a little dose of adventure and stamina but it is well worth the effort!

Roger, our guide, welcomed us at the agency at 8 am and after the introductions we left the city of Chachapoyas (2.331 m) on a little pick up truck. One hour later we were visiting a cave used by Chachapoyas for different rituals related to water. We could see some ceremonial skulls and the caretaker assured us that it is possible to hear mermaids singing during full moon nights. After this visit we moved to Karajia where at the end of a short hike we could admire its unique Chachapoya sarcophagi. This 2.5 metres sarcophagi made of clay and painted white are located high on the cliff side and contained each one the mummy of an important warrior or chief buried in fetal position, that’s why locals call them “pregnant men”. Roger gave us there an excellent introduction about the Chachapoyas’ world, leaving us eager to discover more and more about them. 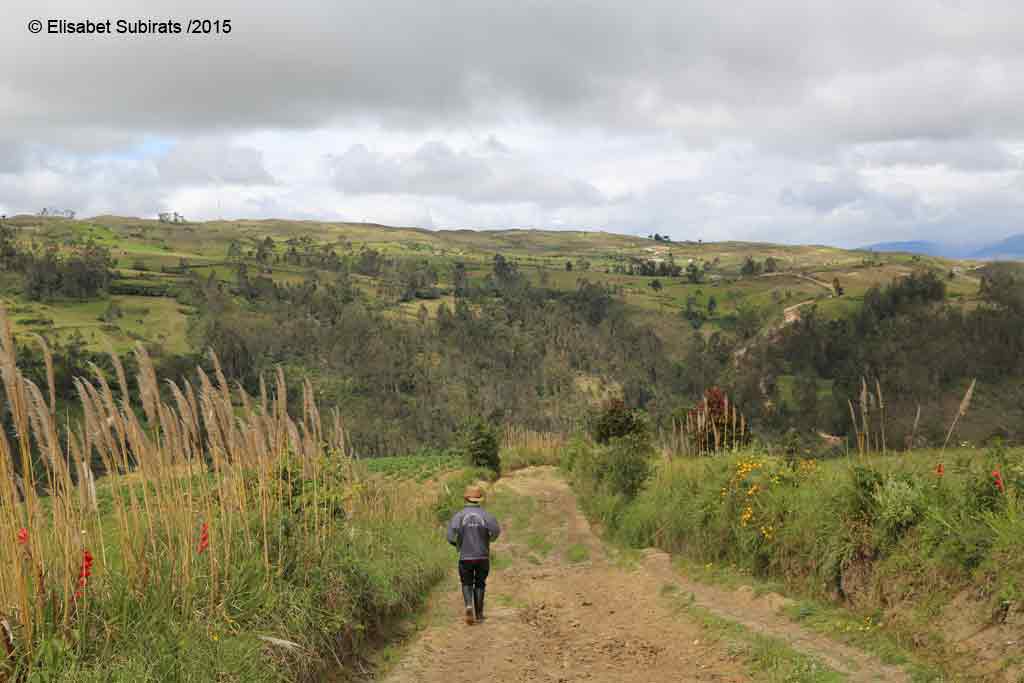 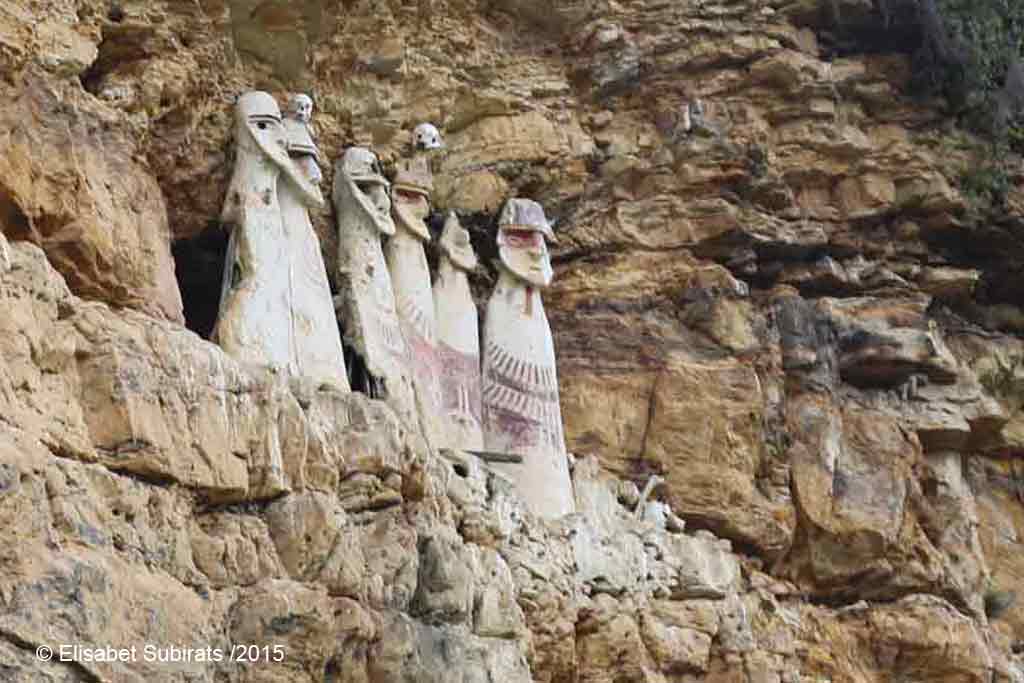 Back to the car, we took a winding and narrow road down to the Belén Valley (2.800 m), the trek’s starting point on the following day. This road was in a such poor condition that it could be easily called “the Death Road of Peru” (for me this road was even more dangerous than the Bolivian one!), I was really scared during that ride 🙁 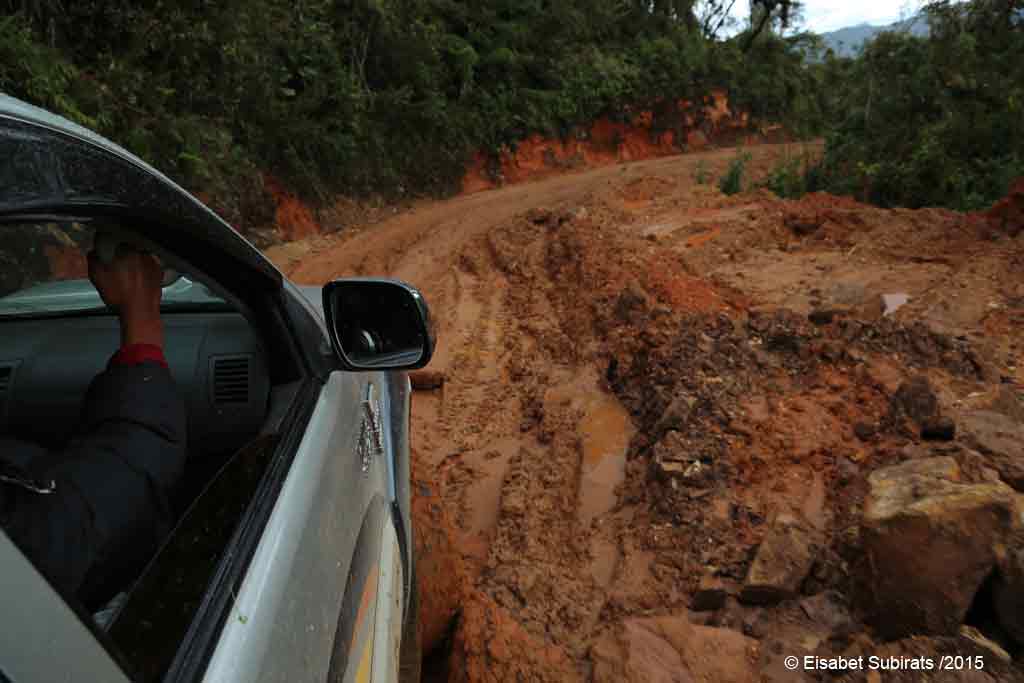 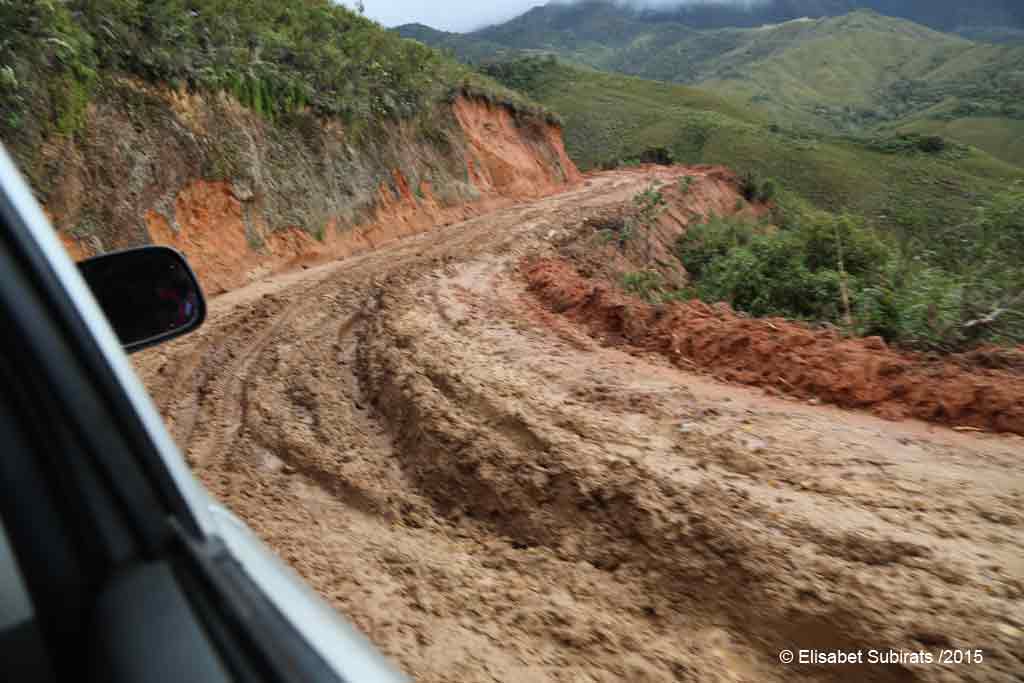 The hut where we were supposed to sleep was completely abandoned during the rainy season and we found it in a pitiful state, it was impossible to use it for this first trek. I suggested Roger to use the kitchen hut instead and after some cleaning and little adjustments and decoration we transformed it in a comfortable “loft” where we could cook and plant our tents inside close to the fire, that was very cool! Roger cooked us a basic but nice dinner and we spent a good night. 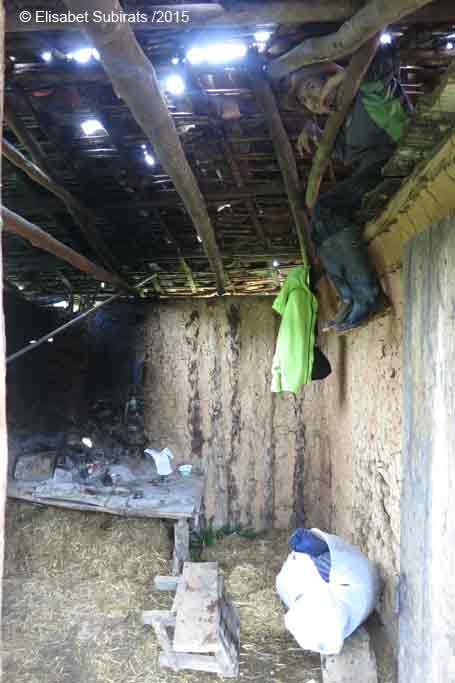 We started walking with the rain but the landscape with the meandering Belén River was so beautiful that any of us seemed bothered by the weather. 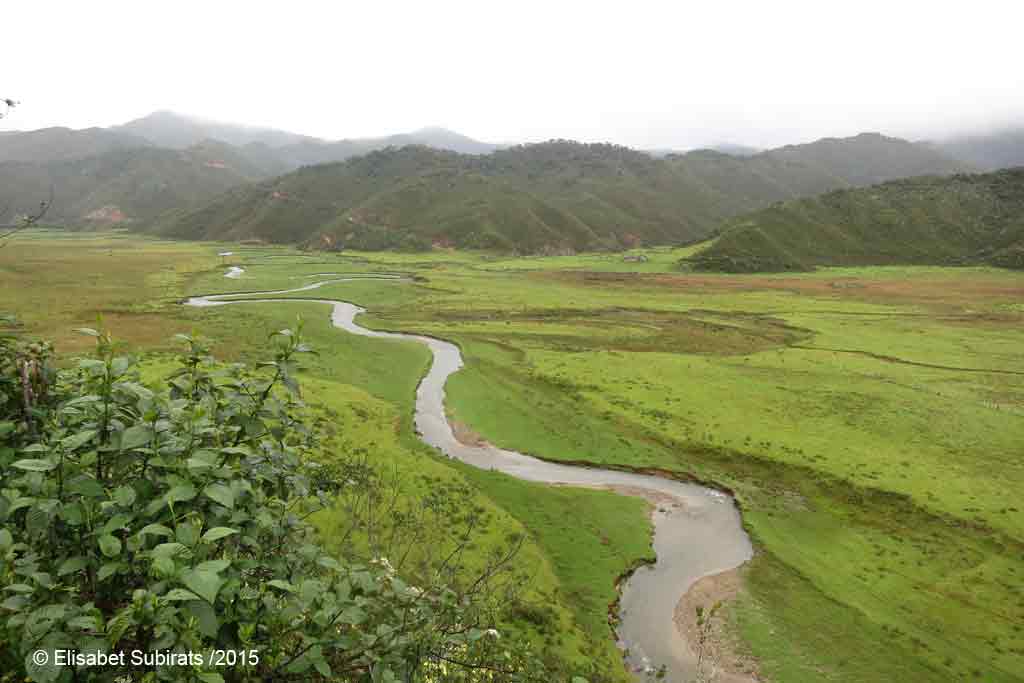 During this day we also followed an ancient Inca trail through the cloud forest (the Chachapoyas did not use stone trails but they were forced by Incas to build some) and visited the first Chachapoya ruins. Before starting the trek I wanted to visit as many ruins as I could but reaching them was so adventurous that I was OK with the little glimpse that Roger proposed. That’s why many Chachapoya villages are still to be discovered, the thick jungle untouched during centuries makes them virtually inaccessible.

After visiting this village called La Pirquilla we descended to the village of Congón (1.800 m) where we had a super dinner, (cold) shower and real beds but I was missing our loft! Walking distance: 18 km, 7hrs 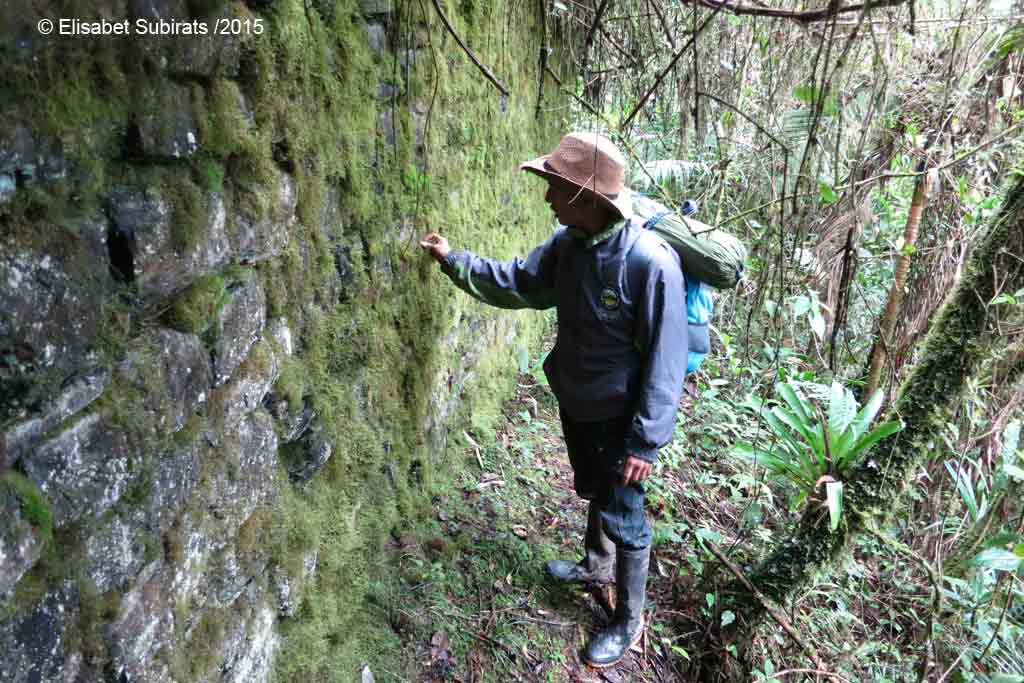 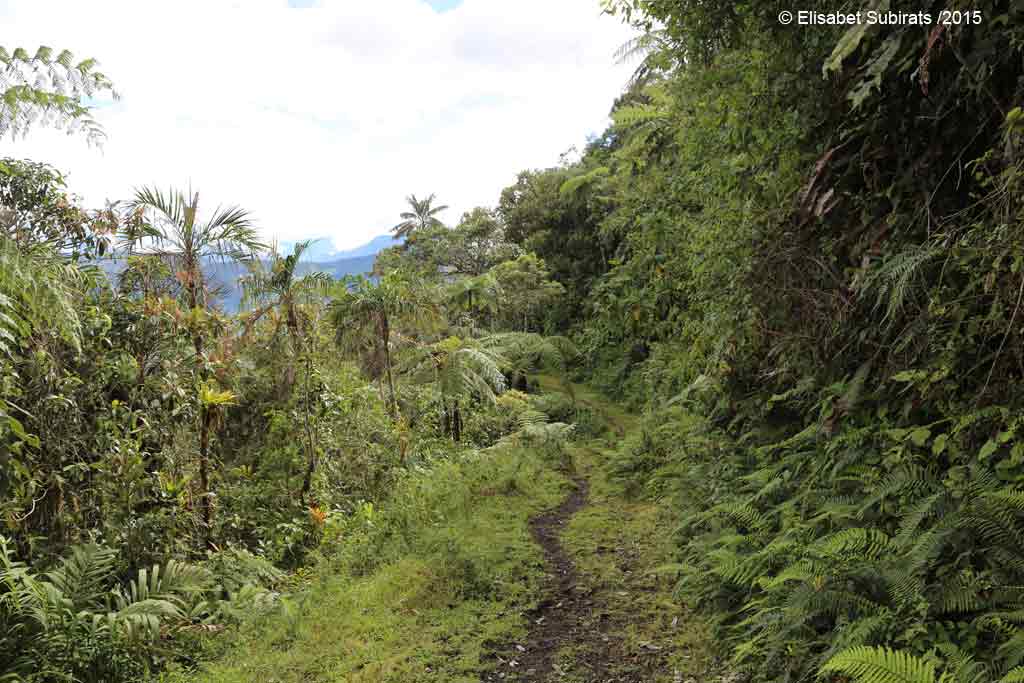 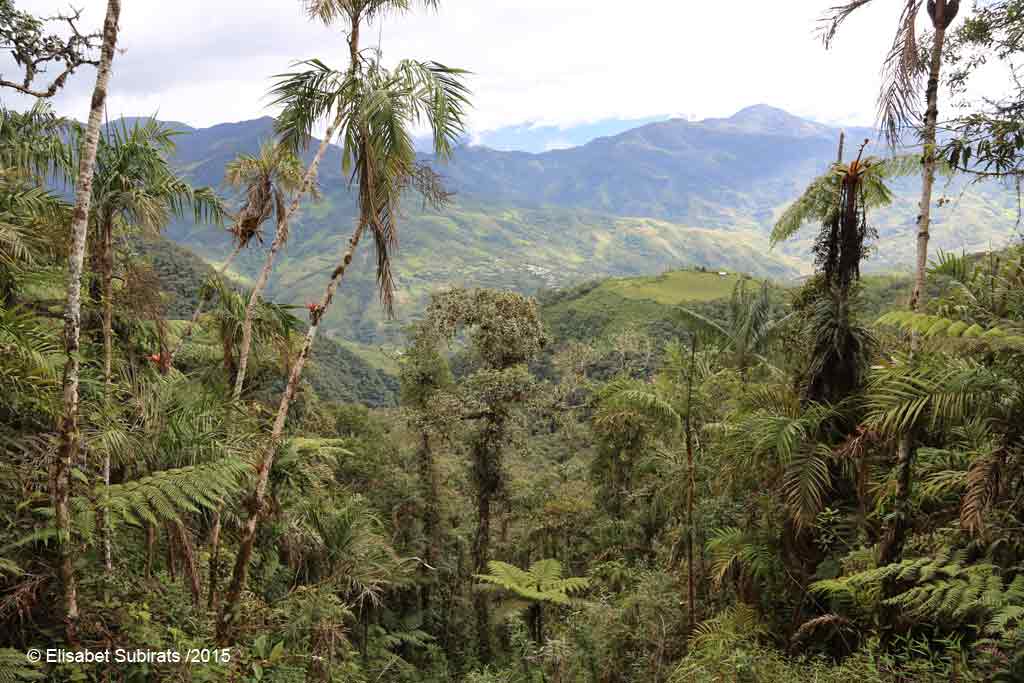 That was the hardest day for me because before us we had to cross the spine of Cordillera Central (30 km) from 1.800 m up to 3.300 m. While our local mates were ok chewing coca leaves continuously, we could only do it on horseback. That was my first time riding a horse and probably the last one: the path was so steep, muddy and full of vegetation that my horse suffered a lot and I did not like to see that 🙁 The landscape was very impressive though. 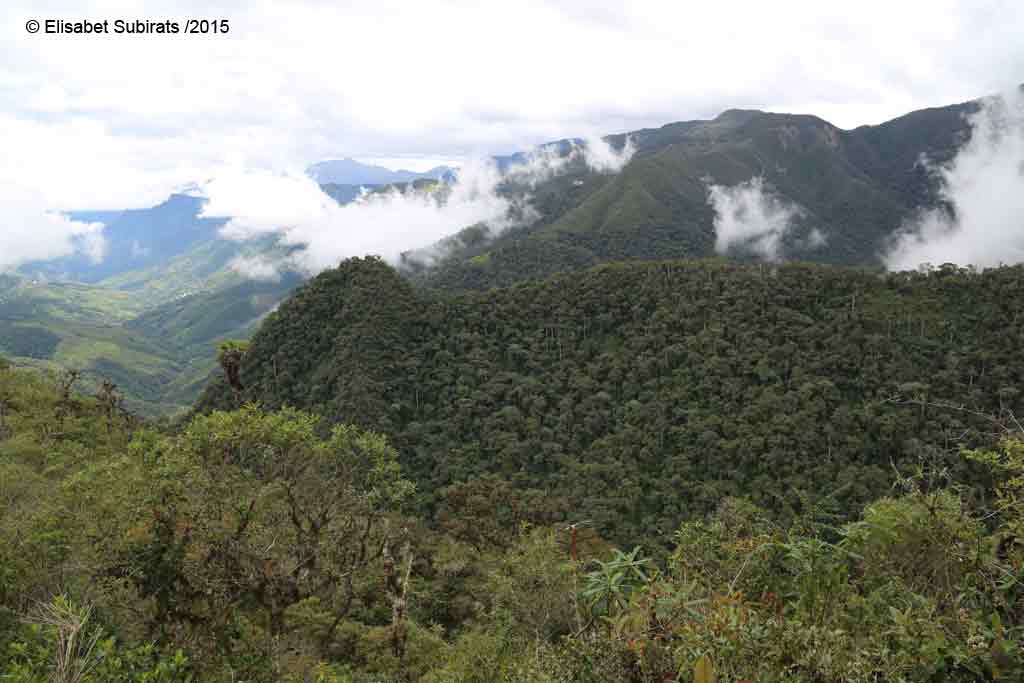 Four hours later, before lunch, we gave the horses a break and visited an ancient citadel called Lanche. The Chachapoyas used to bury their main ancestors in a hole in the middle of the house for protection and Roger only needed to scratch the floor a little bit to find old bones (Norbert believed it was the teeth of Roger’s grandma but I want to think Roger was telling the truth!). 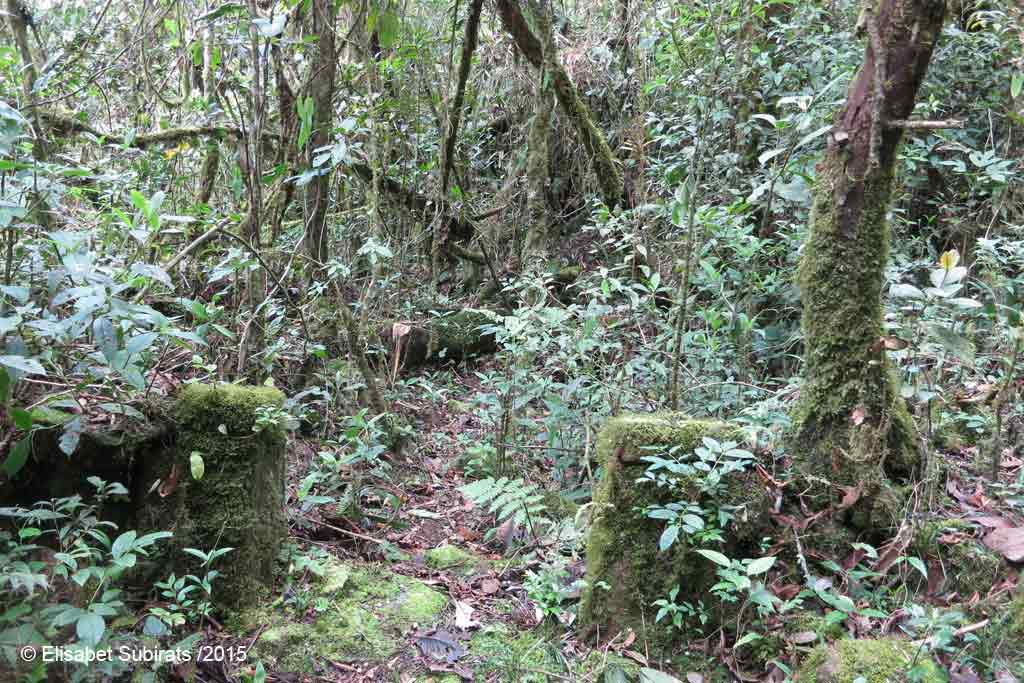 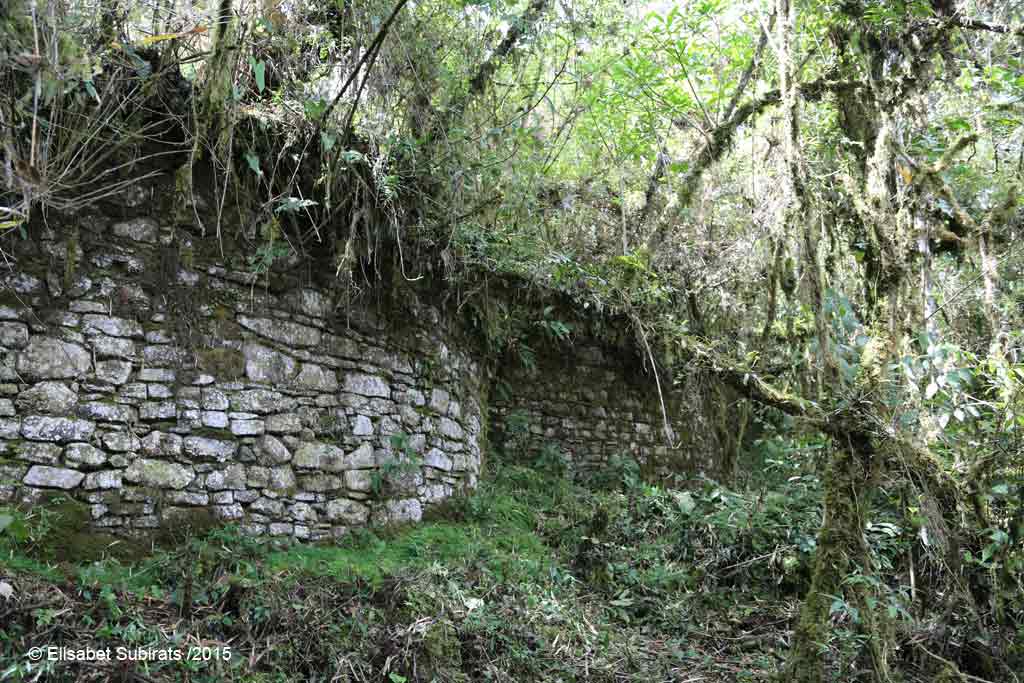 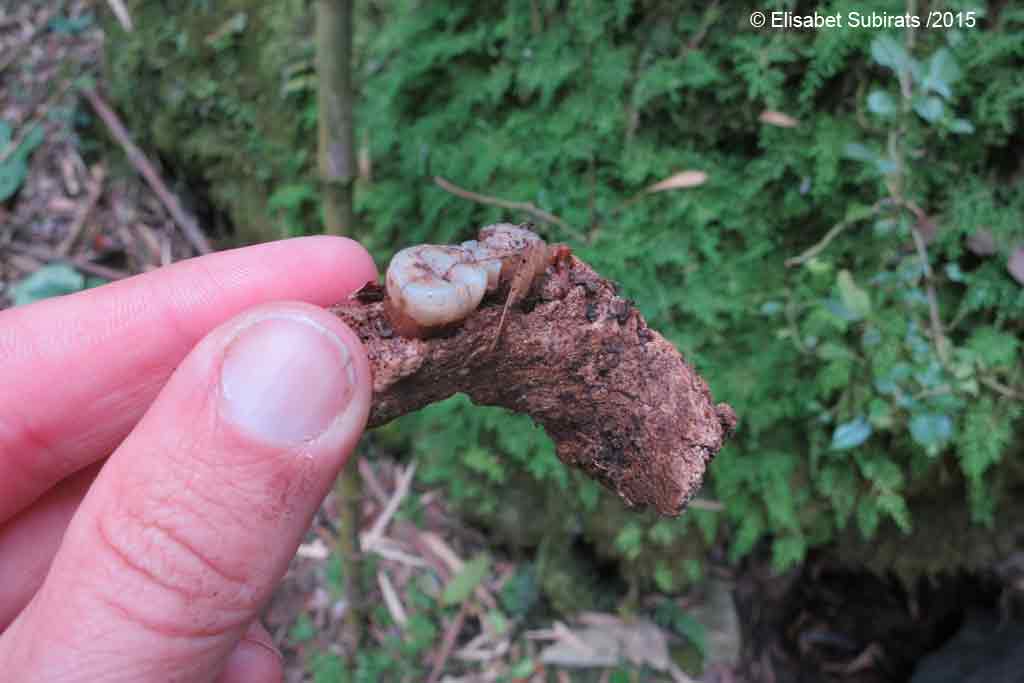 Two hours more on the horse and we finally reached Abra Yumal, the highest point of the trek (3.348 m) with amazing views over the jungle. A three hours (muddy) hike down to Choctamal (2.700 m) followed and there we could have a more than deserved hot shower and excellent dinner. Two kilos of mud on my boots and trousers, some mosquito bites, callus on my hands and some scars on my face (the horse did not have pity towards me, lol) was a high toll to pay but my eyes were also full of amazing pictures of this part of the Amazon so no regrets at all! 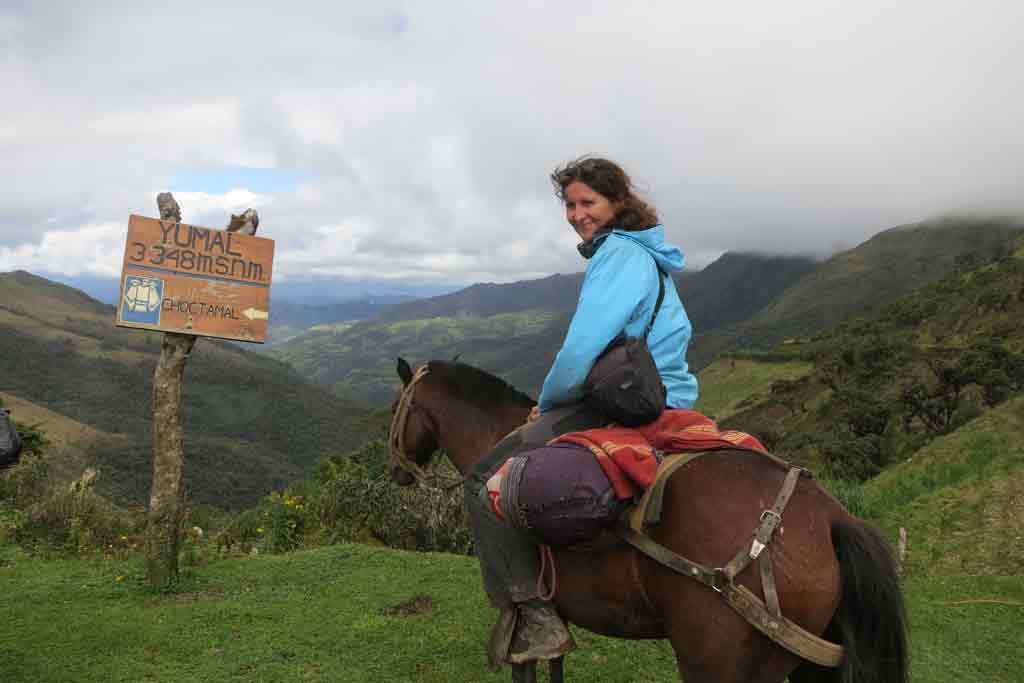 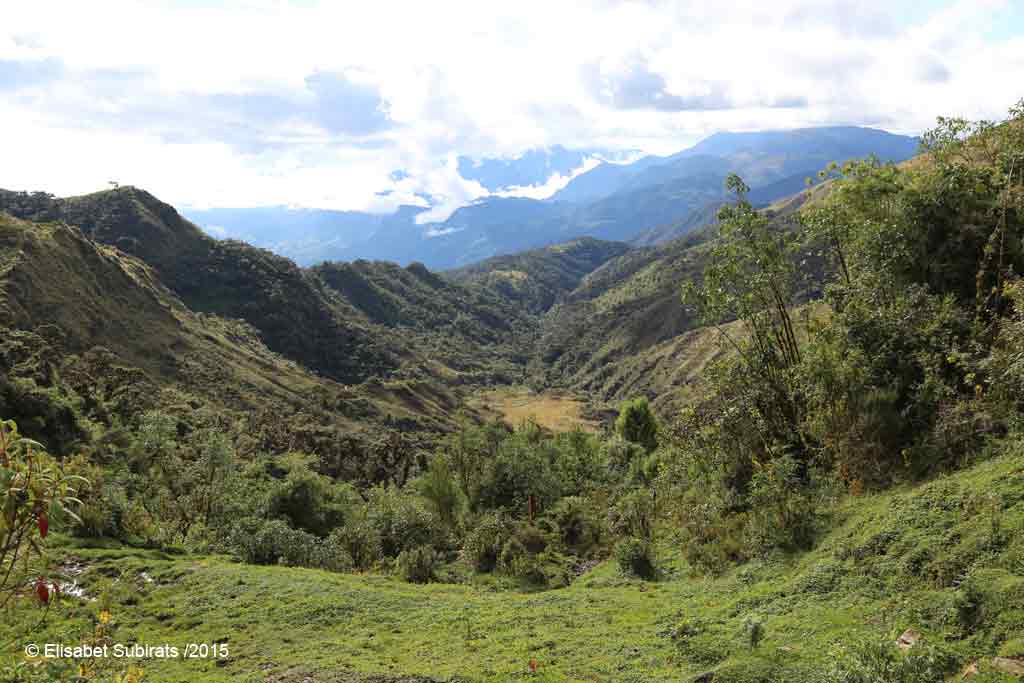 It was time to visit Kuelap (3.000 m), the most important (and best kept) Chachapoya city. Kuelap consists of a walled city with massive exterior stone walls surrounding more than four hundred buildings. The complex, situated on a ridge overlooking the Utcubamba Valley, started to be built in the 6th century AD and it was occupied until the Early Colonial period (1532-1570). This is an amazing site, as beautiful as Machu Picchu itself, that sees only few tourists and it was the perfect ending for this four days trek. 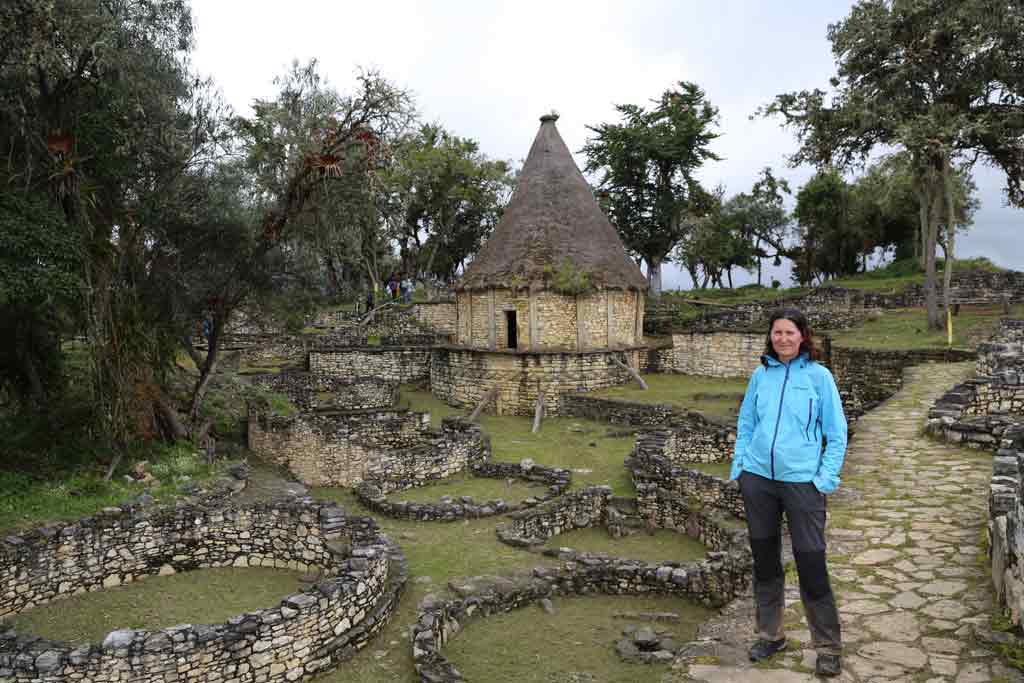 Back to Chachapoyas city I wanted to relax for a while, wash my radioactive clothes and visit other archaeological sites (there is A LOT to see in the region) but the weather forecast showed heavy rains for the following days so it was better to leave as soon as possible. In the end I could leave Chachapoyas only after three days because several landslides blocked the Chiclayo – Chachapoyas road. No departures on the first day and on the second day the bus managed to arrive only to Pedro Ruiz village, where all the buses were blocked by a landslide with no chance to pass until the following day. As there were two buses of the same company stuck there, some of us decided to go back to Chachapoyas on one of them but after half an hour we were trapped again by another landslide and there was no way to move for the next two hours. Back to Chachapoyas city (twelve hours later), I decided to take the Cajamarca route the following day, a rough and narrow road (and a big detour) but free of landslides. 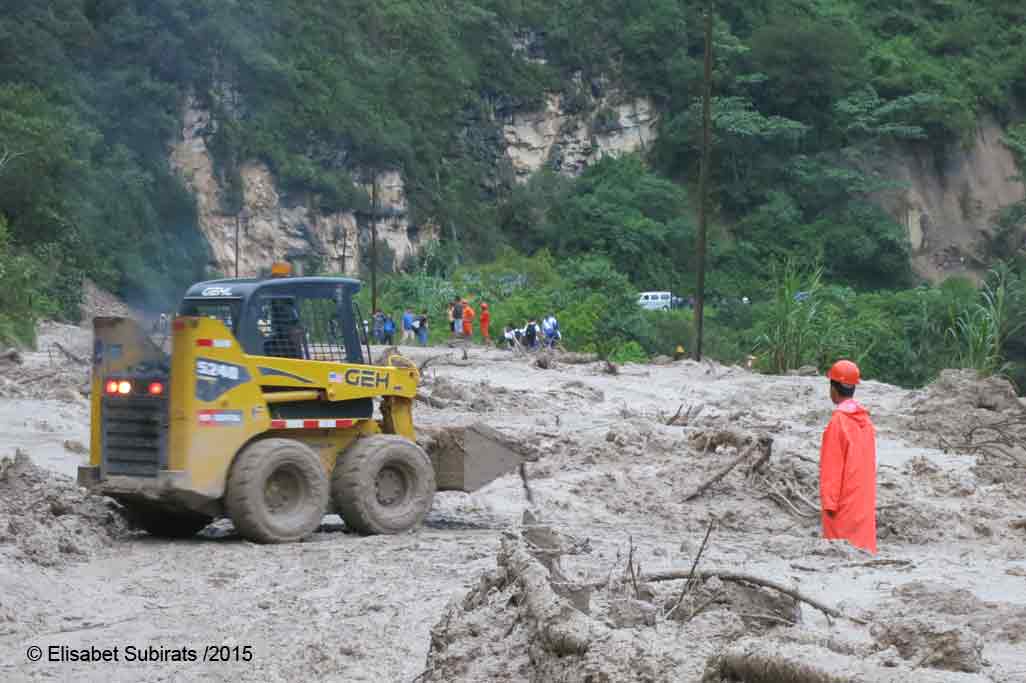 After 3 buses and 24 hours traveling, I reached Mancora (on the coast) where I decided to rest a couple of days in a super bungalow (I deserved it!) with views over the Pacific Ocean. Good things also have and end and that was the end of my Peruvian trip. 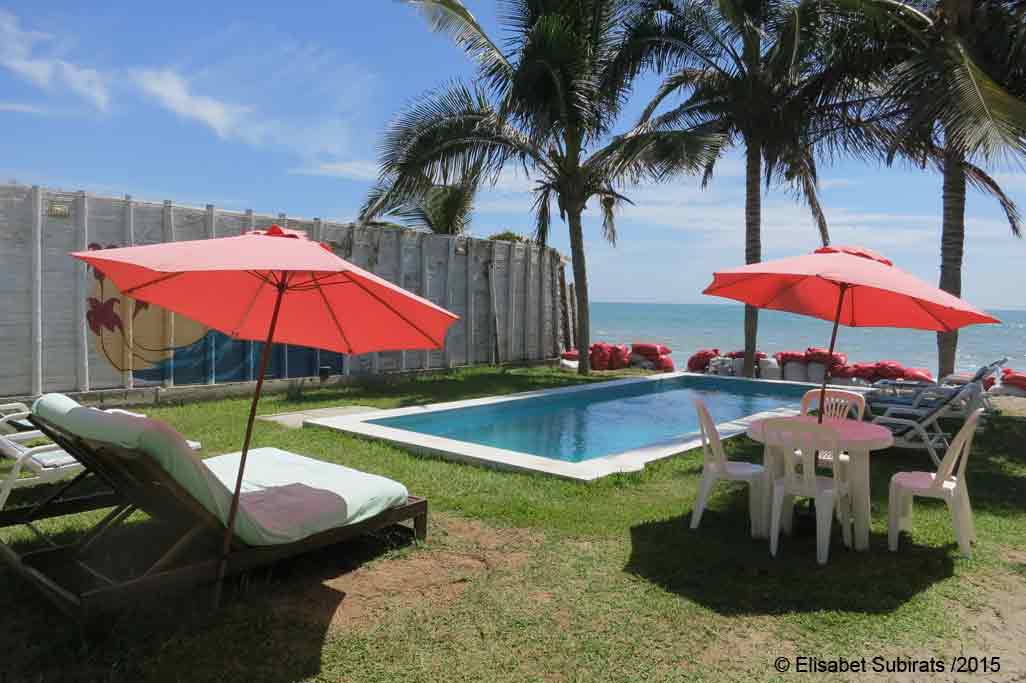 Permanent link to this article: http://holaworld.fr/walking-above-the-clouds-trek-gran-vilaya/