On the way to Tombouctou . .

After some busy cities, it was time for some trekking in rural Mali. The Cliff of Bandiagara (Land of the Dogons) is located about 80 km east of Mopti.  It is a dramatic sandstone cliff, up to 500 metres high and 150 km long, with a high plateau above and sandy semi-desert plains below. 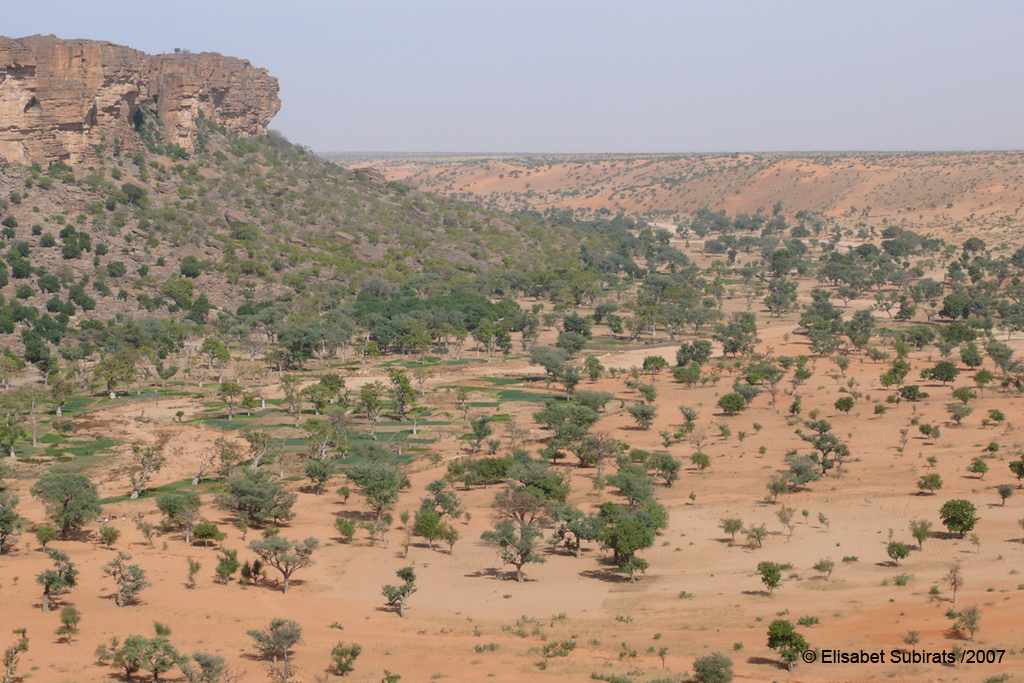 This 3-day trek is a nice mix of gorgeous landscapes and deep culture. The cliffs have been settled for at least 2,000 years.  The Dogon arrived here during the XVth century, bringing their traditional religion and animist beliefs. Being Bandigara Fall a natural shelter, the Dogon could maintain their cultural identity until our days.

On the way to the starting point of the trek, the landscape it is very plain, with a baobab in sight. The baobab tree (“Adansonia digitata”) is very typical tree in this area. Also known as the upside-down tree (the sparse branches resemble roots) it is very spectacular and some of them can reach 25 m high. I have read that some baobab trees are more than 4000 years old! 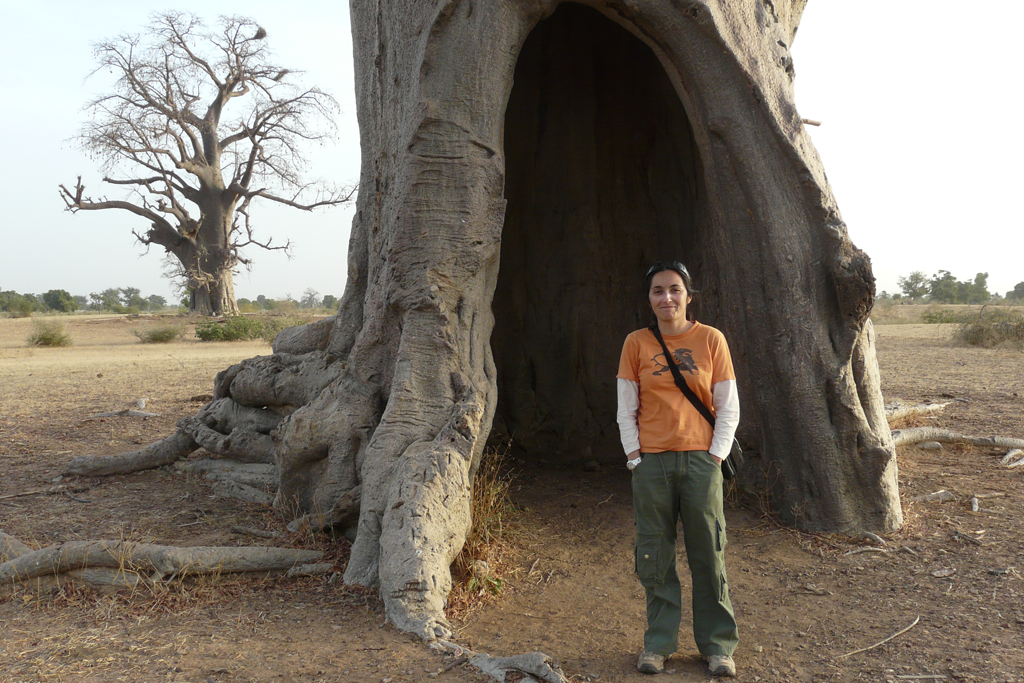 Following our guide’s advice, we carried during the trek some bags of a fruit named “pain de singe”. It is the baobab’s fruit and as you can see on the picture it is pink, with a final sour taste and  it seems to have the same effect than our cola: if you eat it you cannot sleep at night. Foreigners use to offer cola to old Dogon people when they arrive to their village as a sign of respect. 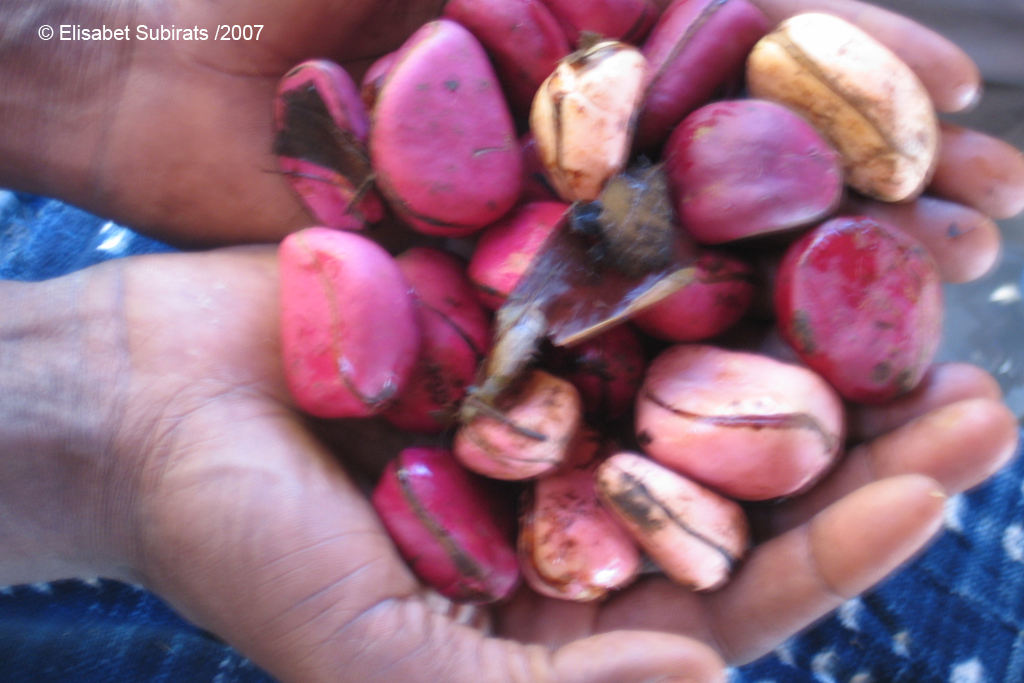 The best way to visit the Dogon country is walking from one village to the next one. Their villages are scattered along the length of the escarpment, some on the plateau and others at the foot of the cliffs, where they have used the shelter of the cliff as the location for their unique mud-built granaries, rock art and ritual purposes. 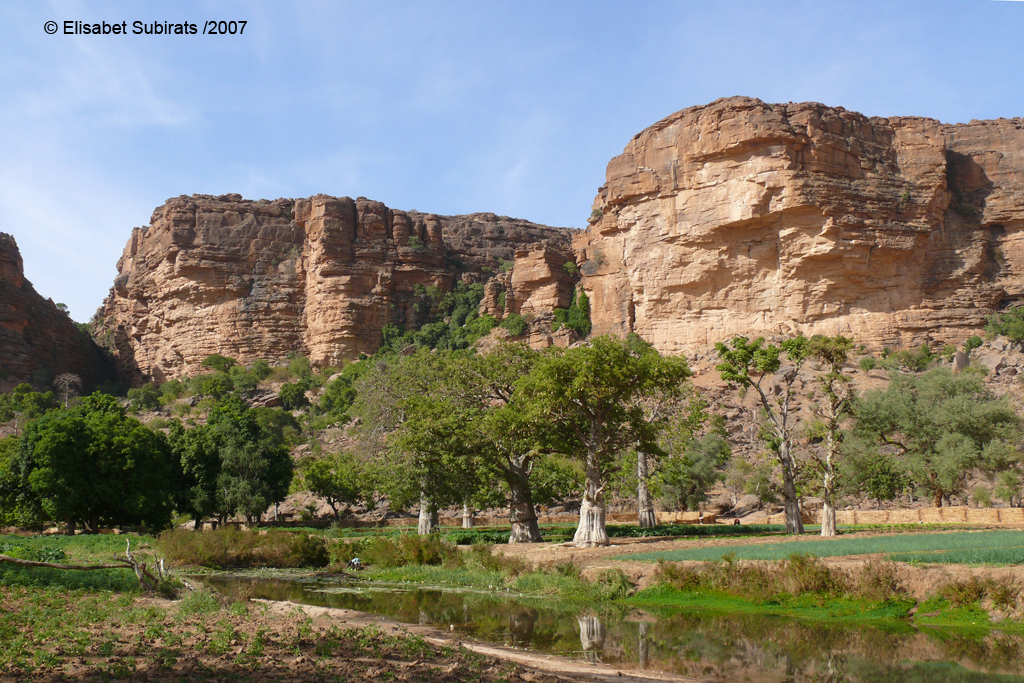 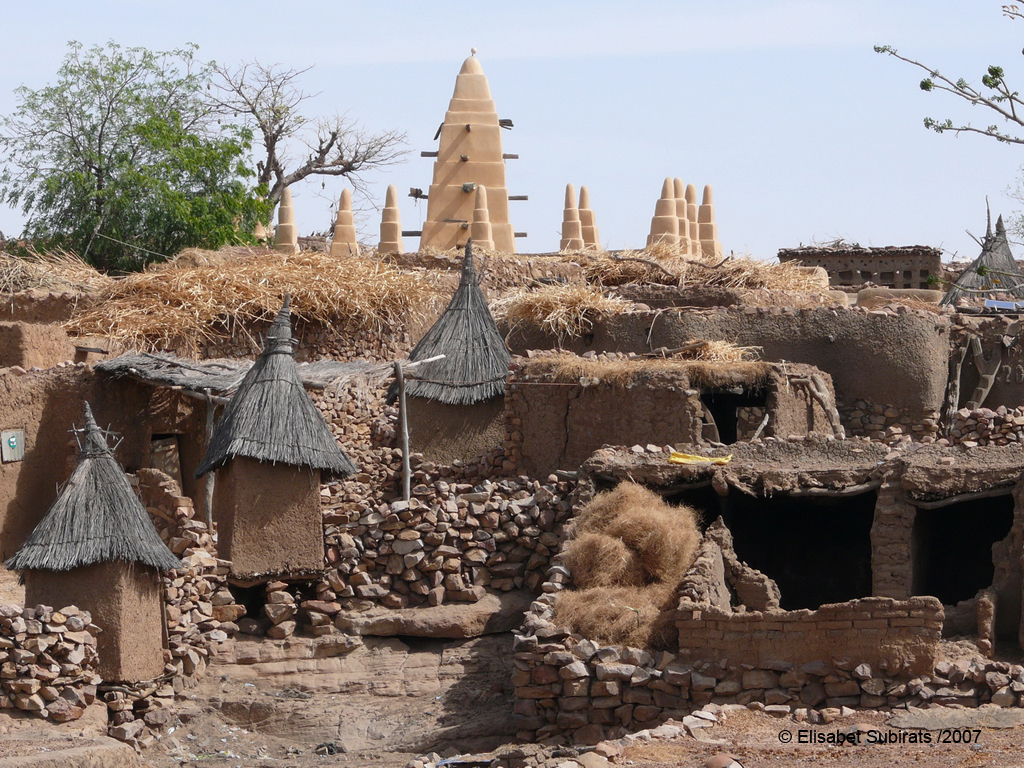 The granaries were maybe the constructions that attired my attention most because they look like the smurfs’ huts. Made of mud and slightly elevated from the land by a wooden structure to avoid the soil’s humidity, each hut corresponds to a family. Sometimes, if the family have more resources, the man has his own granary and the woman has another one (usually bigger!). Women introduce the grain after the harvest through the roof. The wooden sticks on the wall are used not only to keep the consistence of the mud architecture but also as a ladder. Then, when the family needs the grain, it is taken out by a child who introduces himself in the hut through the small window. Don’t you believe me? Look at the picture! 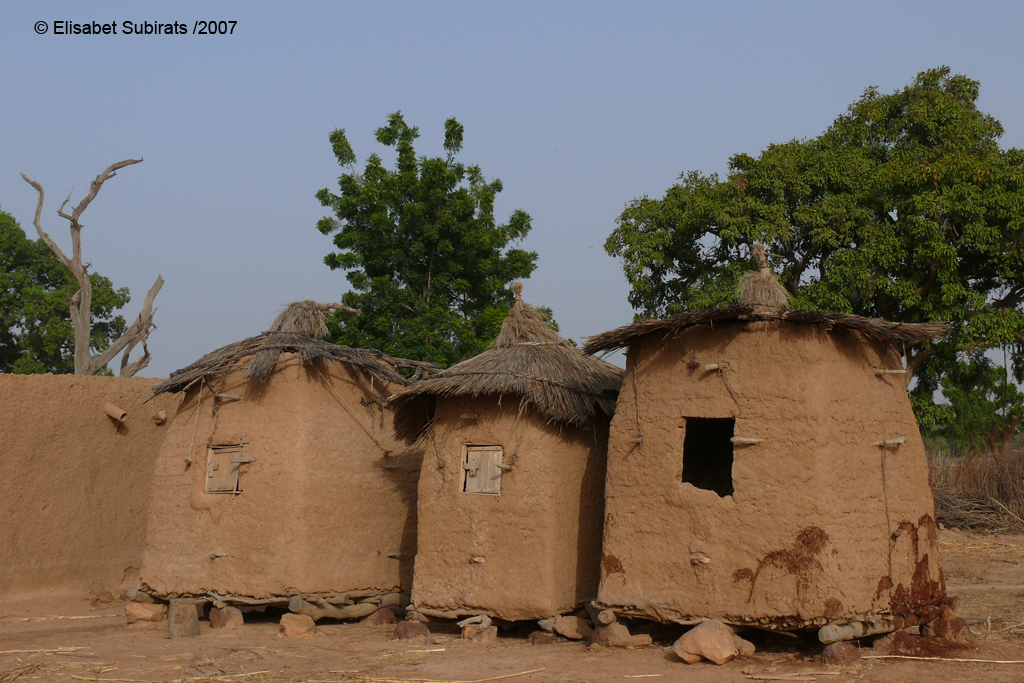 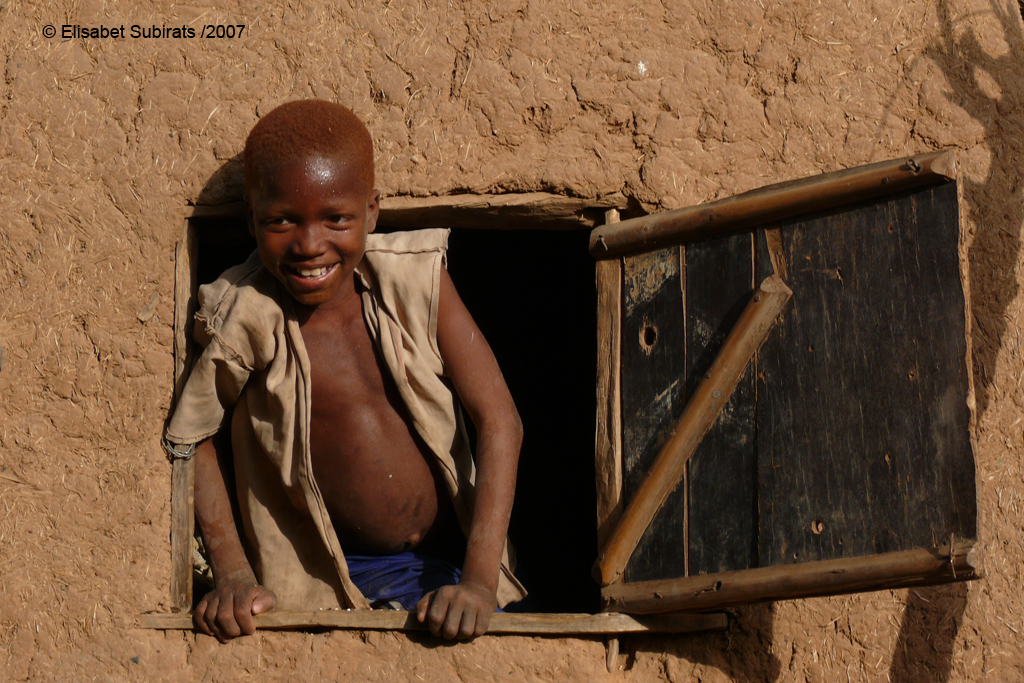 The Dogon are known for their close association with nature, which leads every aspect of their lives, beliefs, dance and other rituals.  Carvings of totem animals on doors, windows and pillars are an obvious manifestation of this in every village. 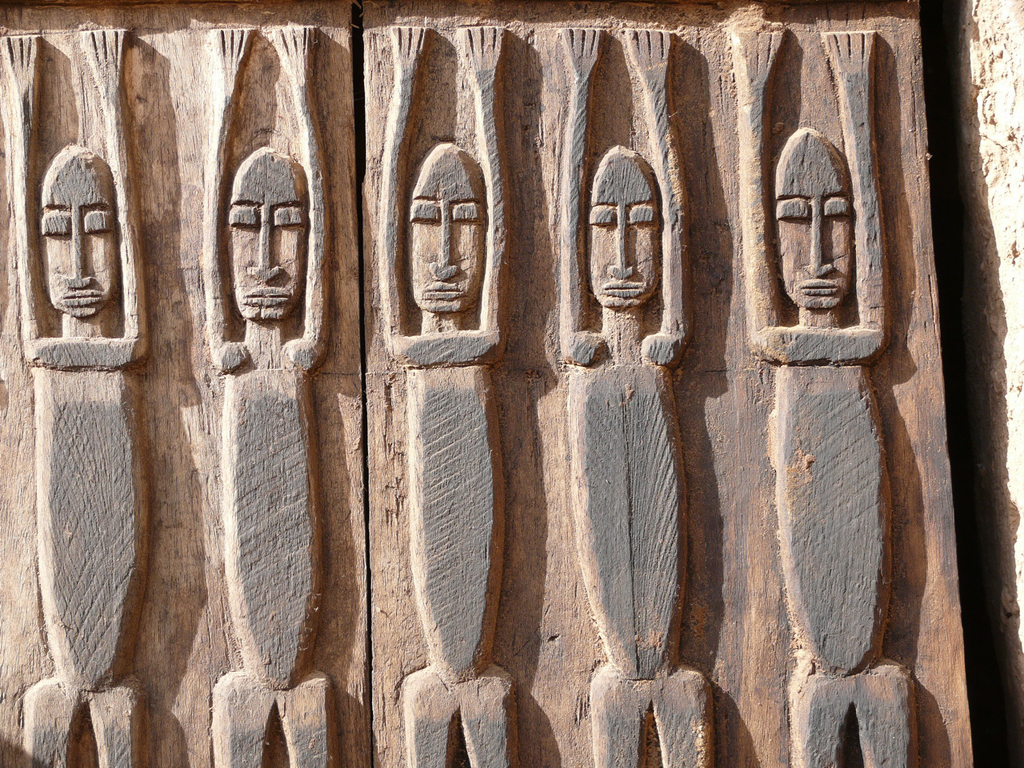 At night we slept with the Dogon, in their houses. They have 0 comfort, sometimes they slept all in the main room with the animals in the room attached. If this way of living was good enough for them, it was also OK for me.

In one of the villages we visited there was a show waiting for us. I don’t like these touristy things especially made for white people but I have to recognize that the show with all those colorful masks and costumes offered very beautiful photo opportunities. 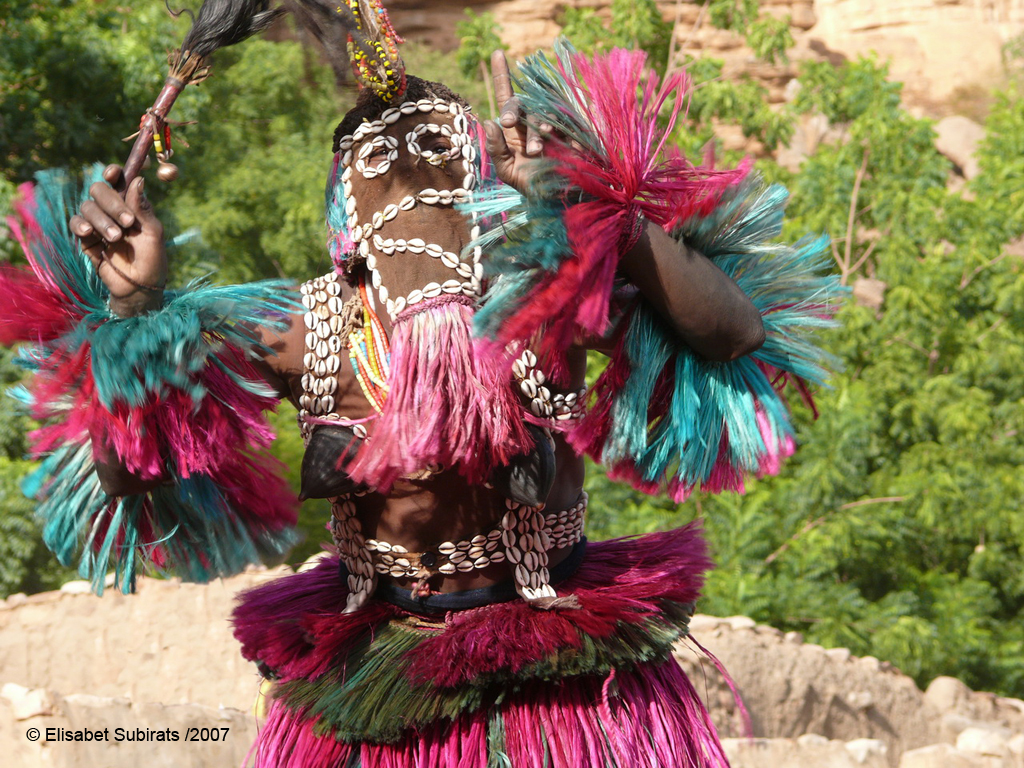 On the last day of the trek we could see some abandoned Tellem villages built high on the cliffs, some of them almost inaccessible. Tellem means for Dogon people “the people that were before” and it was a community of small people (maybe pygmies?), basically hunters that, due to unknown reasons, had to leave this land long time ago. Even if there are a lot of legends about this people its origin is unknown. On these hanging cities there were still visible some tiny cave dwellings, grain stores and sanctuaries with some rock paintings. 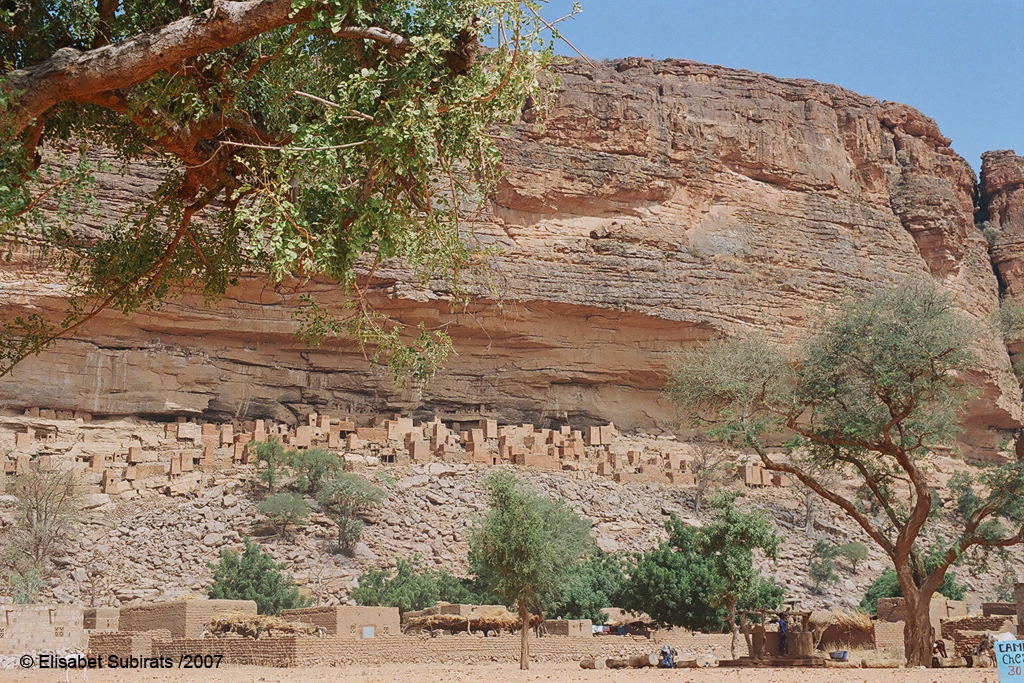 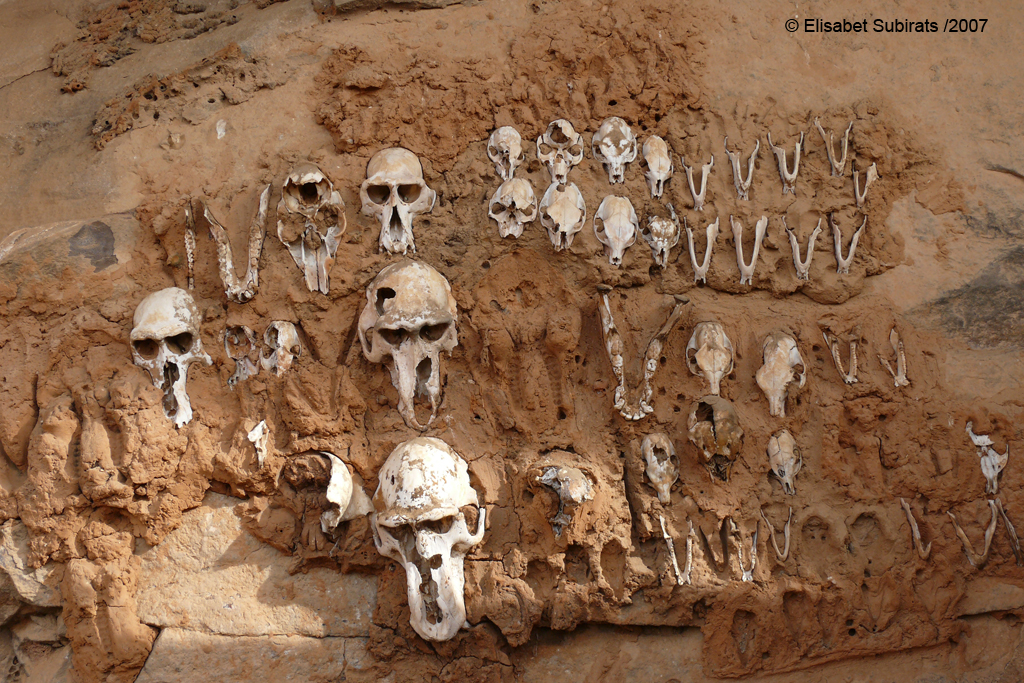 The Bandigara fall trek is one of my fondest memories of Mali. Don’t attempt to do this trek without a trustful guide: apart from showing you the way in a very homogeneous landscape, the Dogon country is full of taboos and if you break them you will be in trouble. Bring lots of water.

Permanent link to this article: http://holaworld.fr/hiking-on-the-land-of-dogons-cliff-of-bandigara/