The North of South Island

The South of North Island

After crossing the Cook Strait by ferry, we arrived at Wellington, New Zealand’s city capital.  In Wellington I picked up Nathalie, who will be traveling with me around the North Island. Our first challenge together was the mythical Tongariro Alpine Crossing, one of my New Zealand’s musts!

The Tongariro Alpine Crossing is an extending hike over steep volcanic terrain and it is often described as NZ’s finest one day walk. These are the ancient lands of Tuwharetoa maoris, who leased them to the government in 1887 to protect their three tapu (sacred) volcanoes: Mt Tongariro (1968m), Mt Ngauruhoe (2991m) and the snowy Mt Ruapehu (2797m). 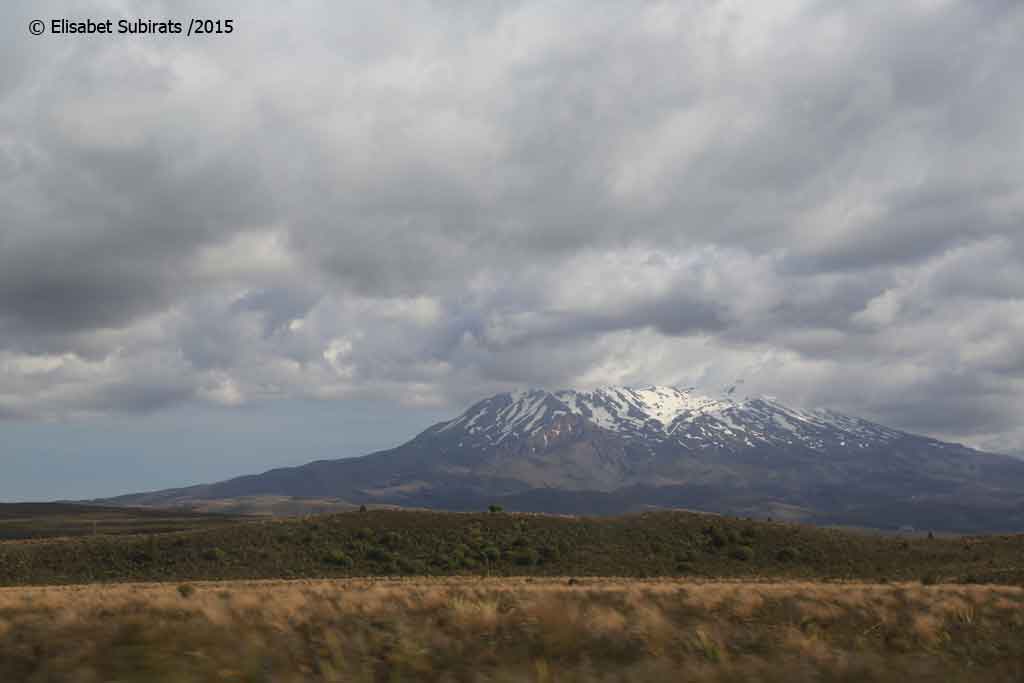 Snowy Mt Ruapehu, on the way to Tongariro Alpine Crossing

The total distance of this hike is 19.4km one way, climbing 800m up and 1200m down, and it is usually walked in 7hrs but I took so many pictures that I needed 8hrs to complete it!

We started the hike at Mangatepopo car park. The first part to Soda Springs was very cool, a kind of warm up. We were walking through Ngauruhoe’s lava fields and Tongariro’s slopes and it was a beautiful landscape, very different from what I had seen in the South Island. The weather was fair, compared to what we could expect in this area (usually all types of weather during the same day and strong winds) so we were lucky with the weather again! 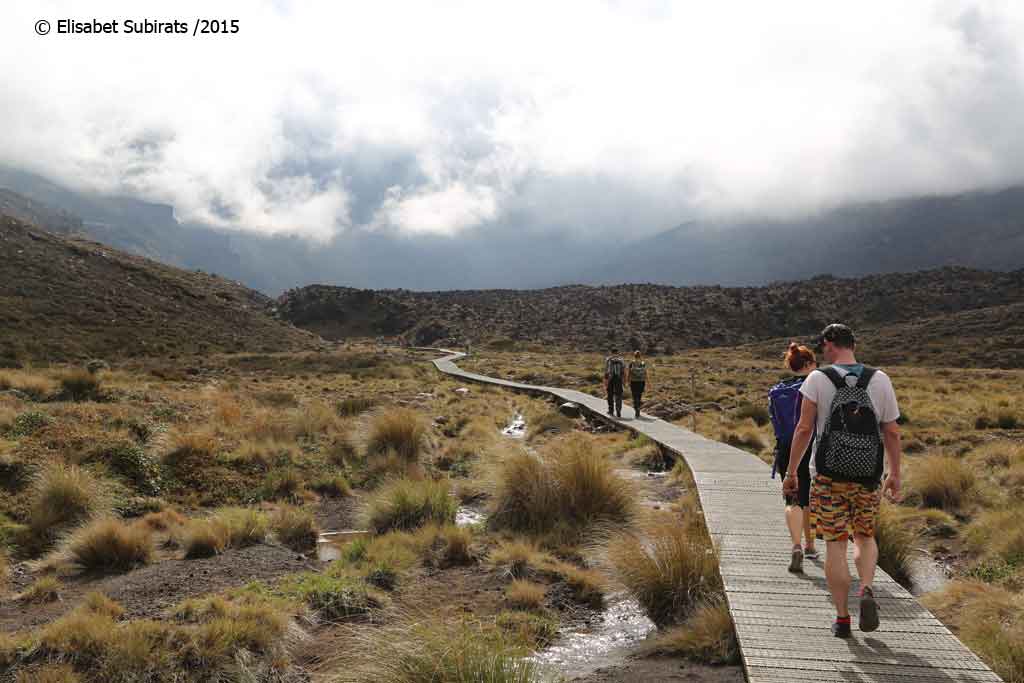 The main track continued around the edge of an old lava flow up to the South Crater. This section of the track, known as the Devil’s Staircase, is very steep but with fantastic views down the valley and out across the surrounding countryside. 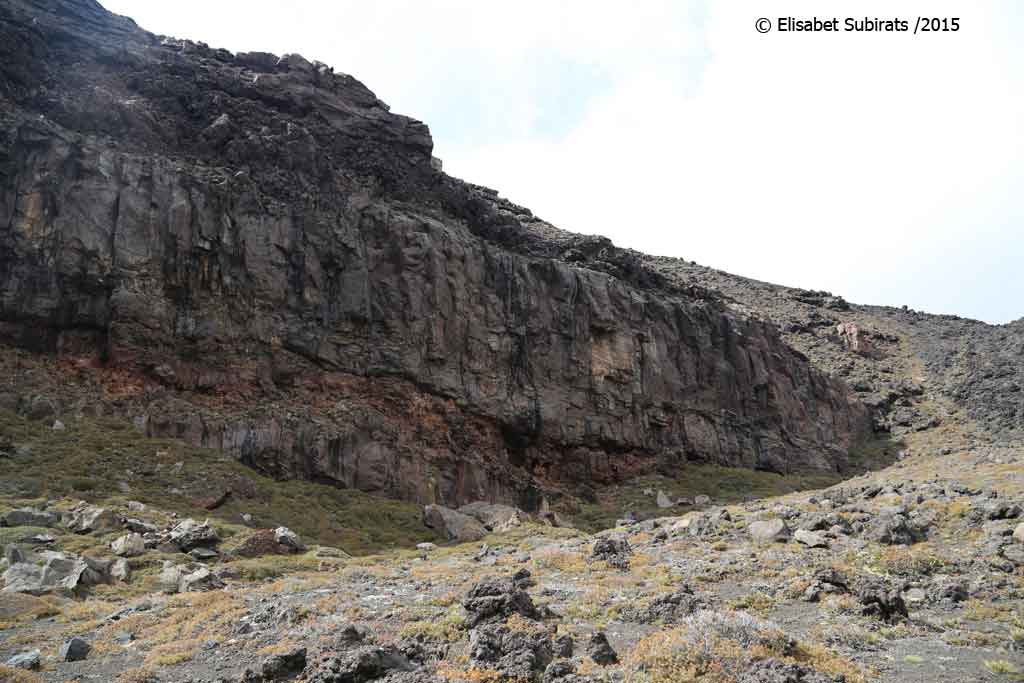 The South Crater is located between Mt Tongariro and Mt Ngauruhoe (which was digitally altered in the films to appear as Mt Doom) and it offers a kind of lunar landscape. 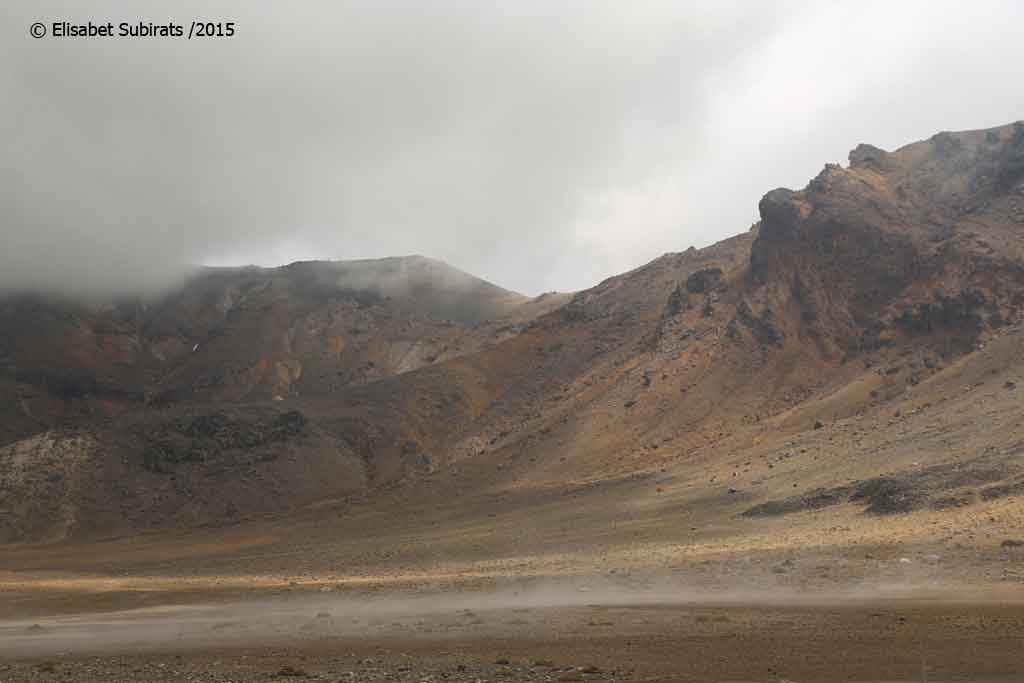 From the South Crater the path climbed to the highest point of the track, at 1886m. I still remember Frodo and his friends walking this path on their way to Mordor so I wanted to have the same picture but with hikers instead of hobbits 😀 This was the most difficult part of the track because the climbing was very steep and just when I decided to take a short break, about half way, Mt Ngauruhoe’s perfect cone (half hidden until then) appeared from the clouds . . . fantastic! 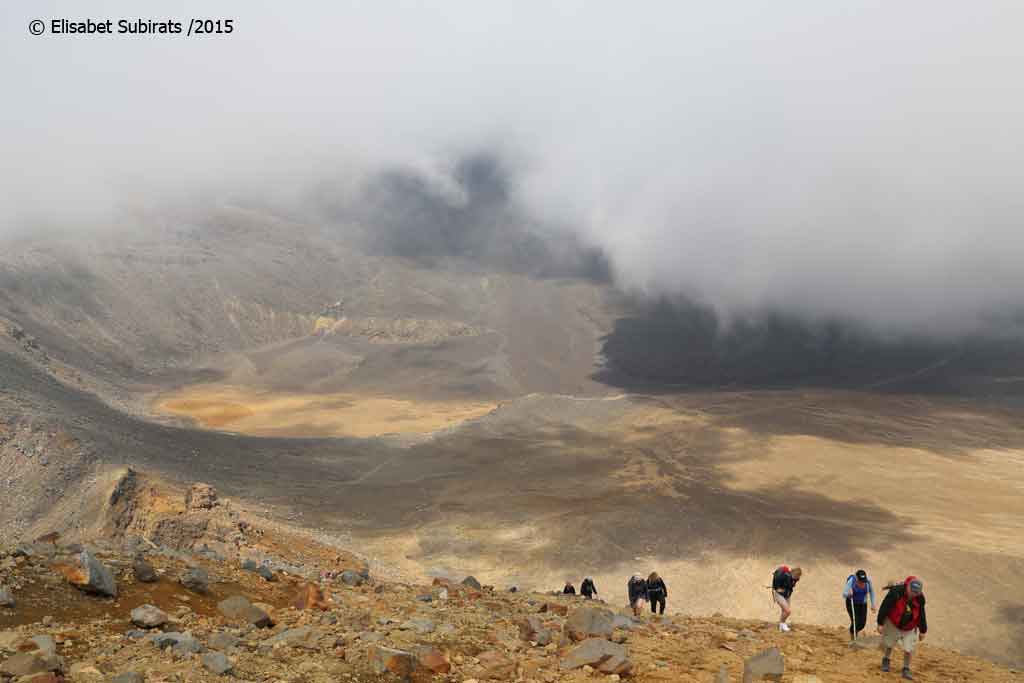 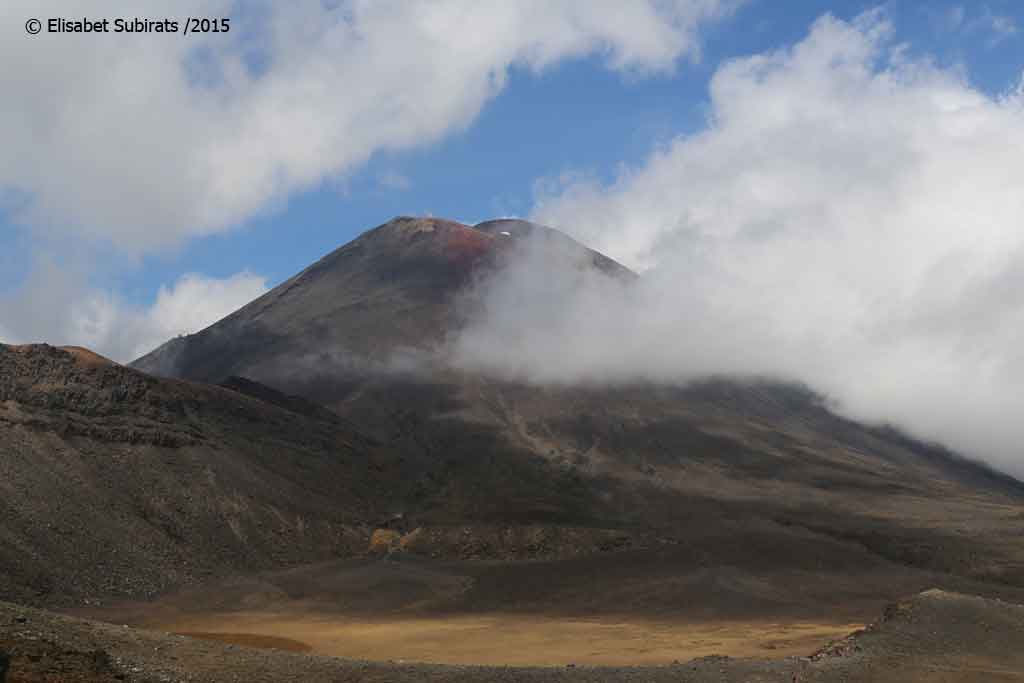 I had my lunch by the Red Crater, which was amazing, and enjoying spectacular views out over the Oturere Valley, Rangipo Desert, Kaimanawa Ranges and Tongariro summit! 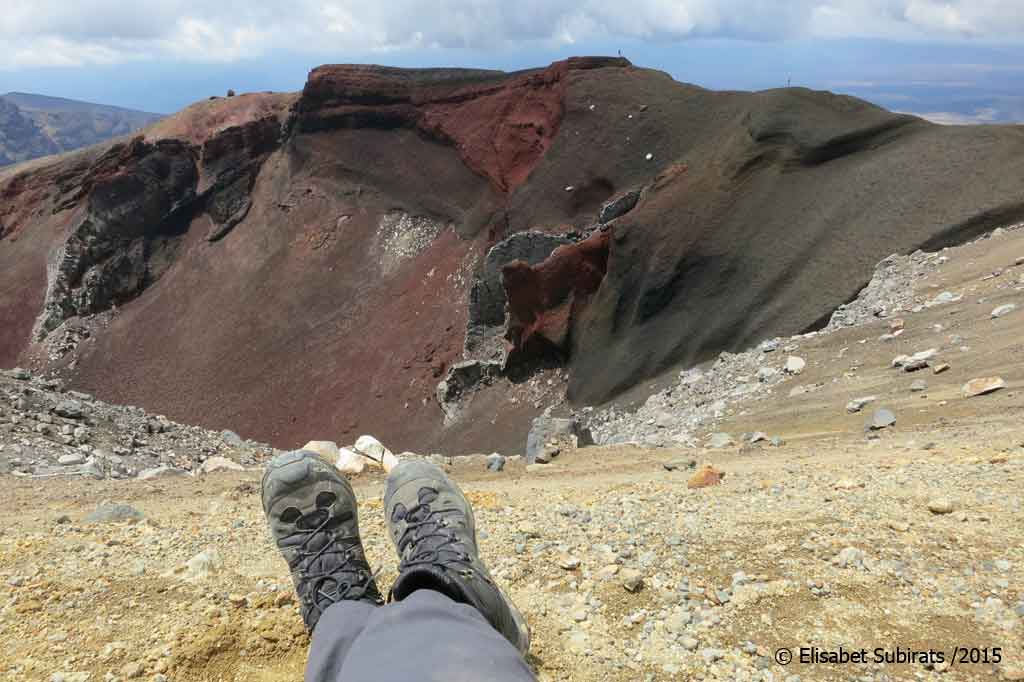 After the lunch break, the track went down towards the Emerald Lakes. This is one of the most iconic views of Tongariro Crossing and it was also my favourite part, despite it was very slippery (loose scoria underfoot can move quickly and easily) and I saw many hikers falling, me included! Minerals leached from the surrounding rock cause the colour of the Lakes and the steam vents above the lake are responsible for the sulphurous smell. 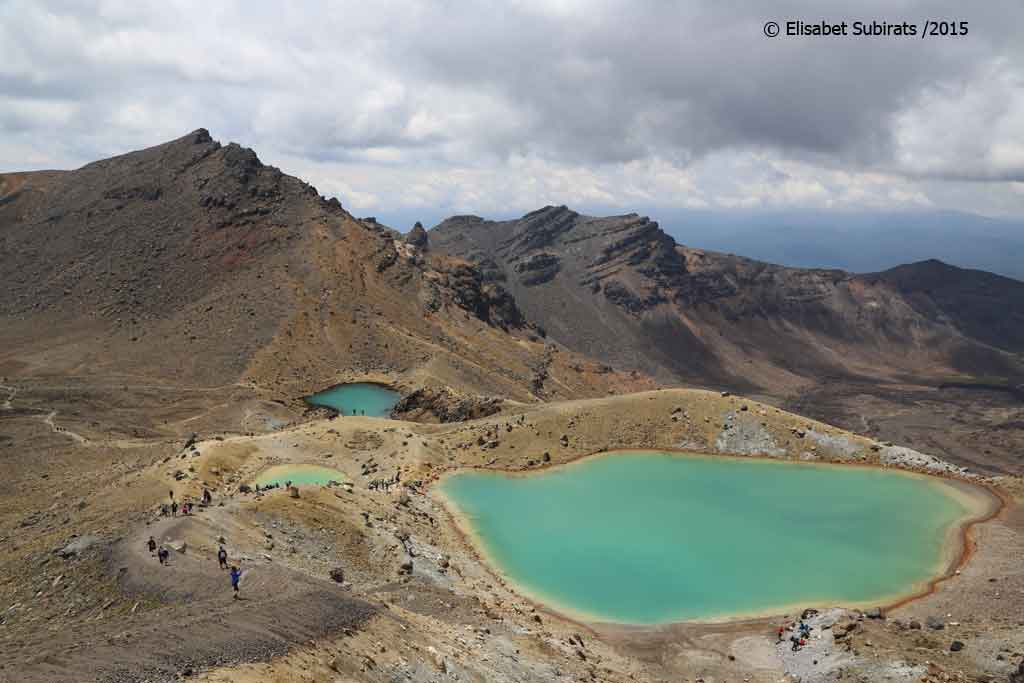 After crossing Tongariro’s caldera we reached the Blue Lake (a cold acidic lake), where I took another nice break. This lake is tapu (sacred) so hikers are not allowed to eat or drink around its shores. 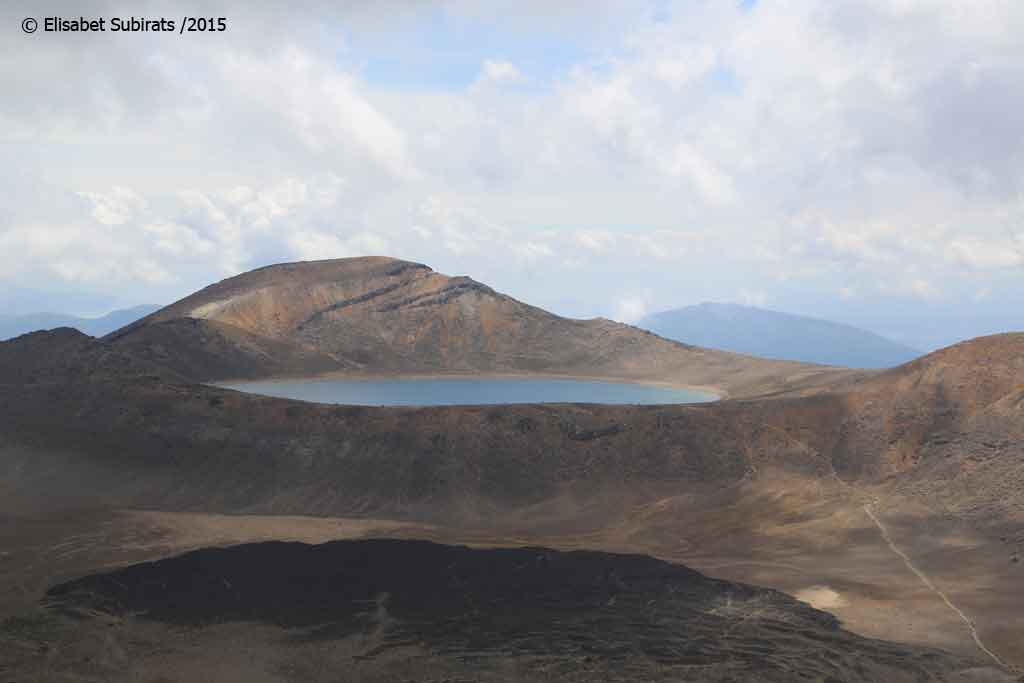 The last part of the track was a long zig zag 1000m down to Ketetahi car park. On the way, we could see the impressive Lake Taupo, the biggest lake in New Zealand, in front of us and the smoking Te Maari Crater on the right. Close to Ketetahi Hut there are some hot springs that hikers could use in the past to relax but now they are off limits because of a disagreement between the government and Iwi maoris (the owners of these lands). 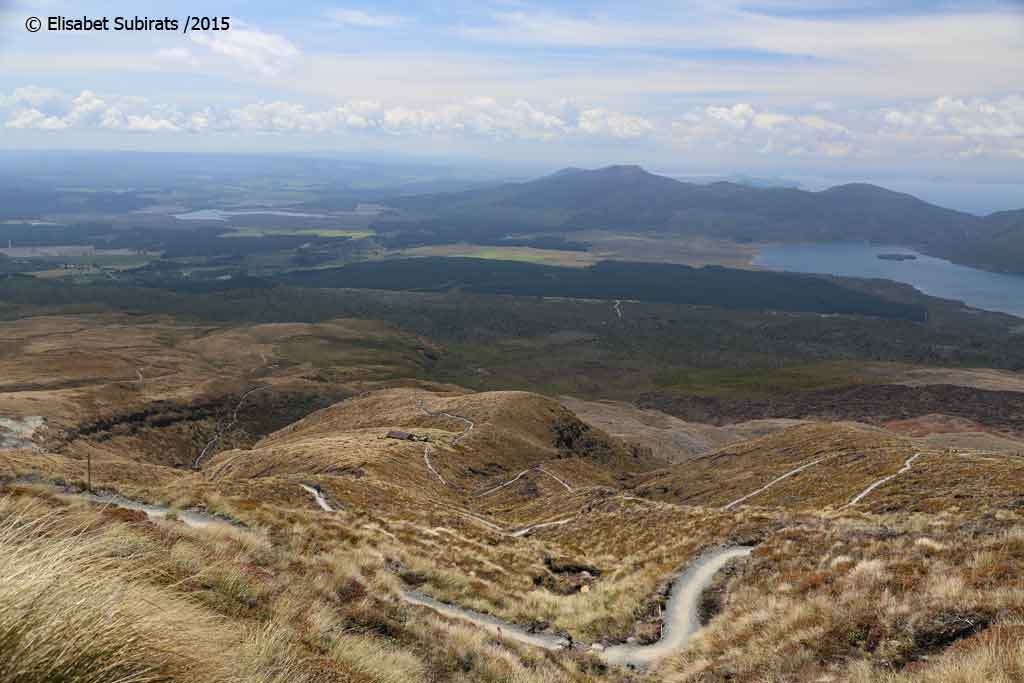 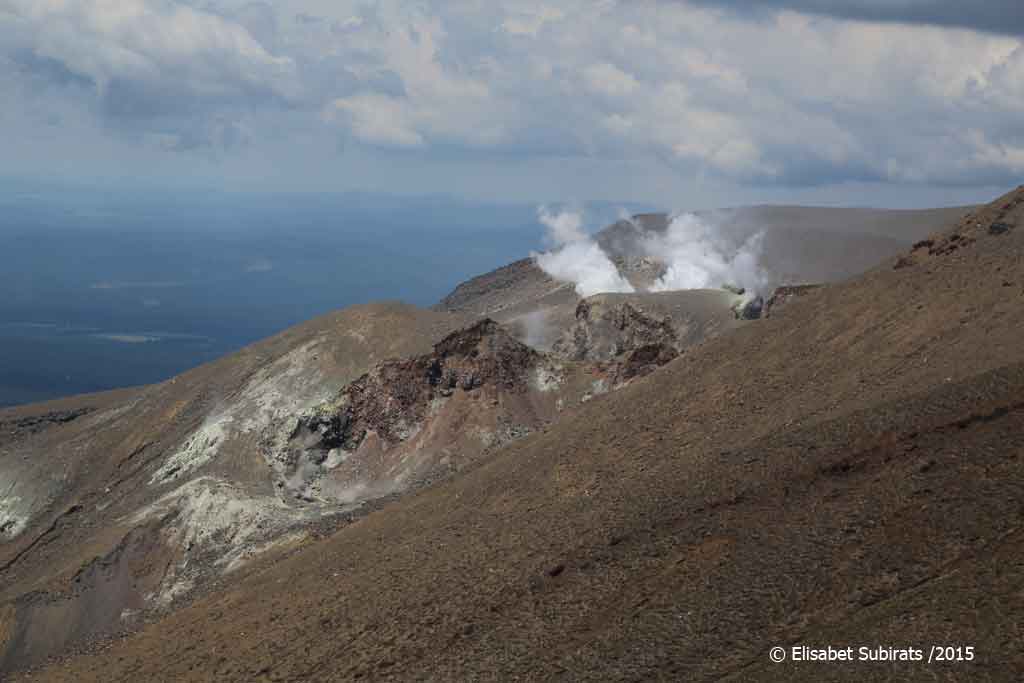 Back to the camp site we celebrated the end of the hike with a barbecue, a salad and some wine. Nathalie, as good French, wanted to eat and drink well and after two weeks eating basically pasta I did not mind!! 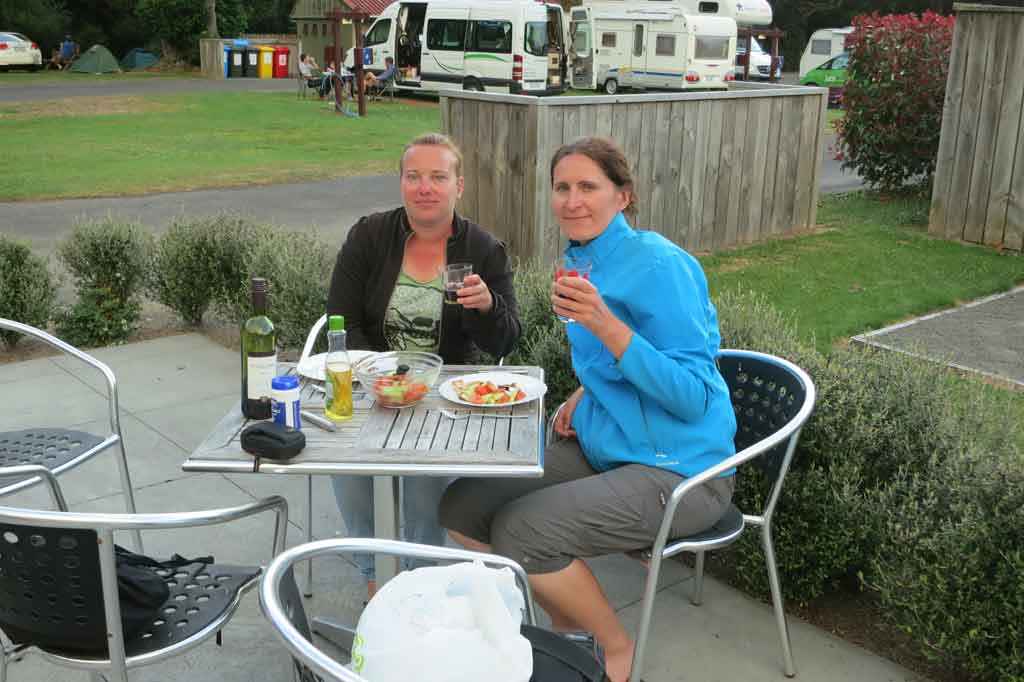 Permanent link to this article: http://holaworld.fr/mythical-tongariro-crossing/